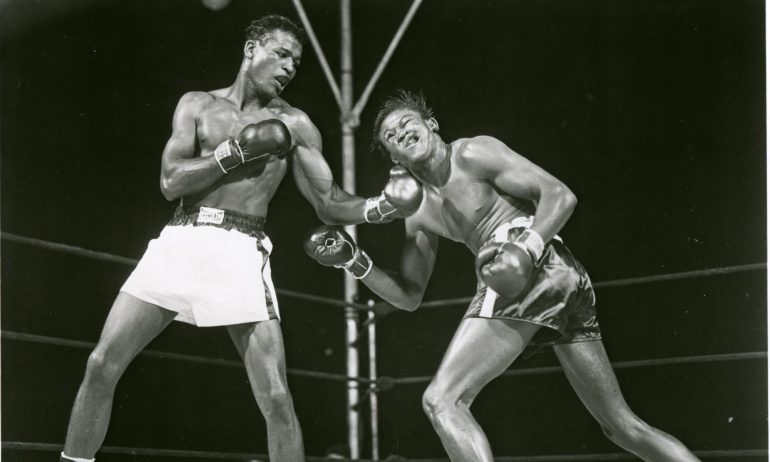 Background: The United States has produced an inordinate number of great fighters. The “five more” listed below could easily be expanded to 15, 20 or more without a significant drop off in ability, arguably including such modern fighters as Evander Holyfield, Roy Jones Jr. and Floyd Mayweather Jr. That said, all American boxing legends had weaknesses. All but one, that is. Sugar Ray Robinson was as close to perfect as any boxer in history. In baseball terms, he would be called a five-tool player. By all accounts, he had sublime all-around skills, blazing speed, uncanny timing, what the Associated Press called “murderous” punching power (109 KOs, 20 in the first round) and unusual durability. In almost 200 fights, he was stopped only once. And that was the result of heat exhaustion in a fight he was winning against light heavyweight champ Joey Maxim. Muhammad Ali spoke for a lot of people when he called Robinson, “the king, the master, my idol.” Robinson won the first 39 fights of his pro career, lost a decision to fellow Hall of Famer Jake LaMotta (who outweighed him by 16 pounds) and then went undefeated in his next 91 fights (not including a no-contest) against many of the best welterweights and middleweights of an era wonderfully deep in talent. That gave him a record of 129-1-2 to start his career, perhaps the greatest run the sport has known. It was another Hall of Famer, Randy Turpin, who upset Robinson in 1951 to win the middleweight title and end his unbeaten streak at 91 but Robinson won the rematch two months later, as he was wont to do. No fighter beat him twice until he was near retirement. He proved to be mortal not long after the Turpin series, losing a number of big fights, but he remained a championship-caliber fighter as he approached 40 in spite of tremendous wear and tear over more than two decades as pro. He finally lost the world middleweight title to Gene Fullmer two months before he turned 40 and would retire at 44. In the end, he was almost untouchable as a welterweight – losing only to a great middleweight he would beat five times – and was arguably the greatest 160-pounder ever during an era with only eight divisions. Indeed, he set a standard that no fighter since has been able to meet. “That man was beautiful,” Ali said. “Timing, speed, reflexes, rhythm, his body, everything was beautiful. And to me, still, I would say pound for pound. I’d say I’m the greatest heavyweight of all time, but pound for pound, I still say Sugar Ray Robinson was the greatest of all time.”

Quote: “Ray Robinson was the perfect fighter because he had no weakness,” boxing writer Jack Newfield said. “He had one greatest chins of all time. He was never really knocked out in a 25 year career. Another special thing about Robinson was how many times he was able to get off the floor to win. He always rose to the occasion.”