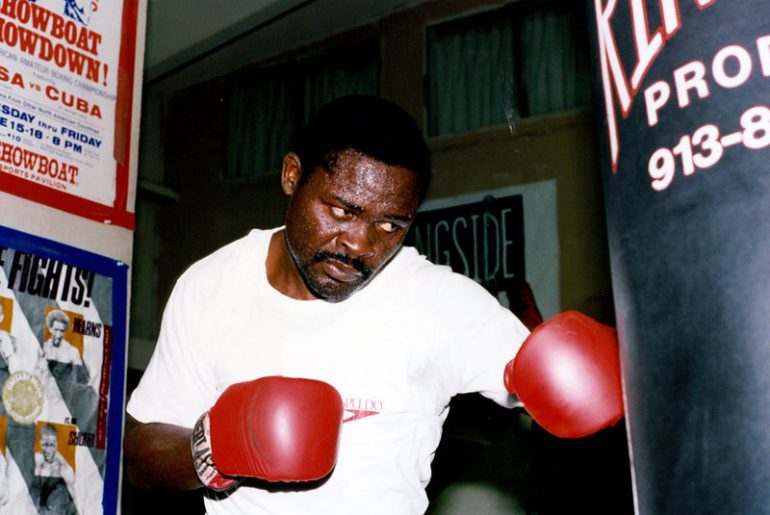 Photo from The Ring archive
09
Oct
by Michael Rosenthal

Background: “The Professor” might’ve made the biggest impression of his career in defeat and shortly before tragedy. Nelson, both clever (hence the nickname) and powerful, was only 13-0 as a pro and unknown when he was asked to fight the great Salvador Sanchez of Mexico for the world featherweight title on last-minute notice in 1982 at Madison Square Garden. He accepted. The stout little Ghanaian didn’t win – he was stopped in the 15th and final round – but he shocked the boxing world by pushing Sanchez to his limit in a back-and-forth brawl. “He was a very strong fighter with a lot of heart,” Sanchez said of Nelson. “He came to take my title. I wanted to finish him off earlier but he was too strong.” Sanchez was killed in a car accident shortly after the fight, which left Nelson in emotional tatters, but he used the classic battle as a launching point for his own remarkable career. Two years later, he proved his performance against Sanchez was only the beginning when he stopped fellow Hall of Famer Wilfredo Gomez to win the WBC 126-pound title in Gomez’s home nation of Puerto Rico. Nelson would end up holding a featherweight or junior lightweight title almost continuously from 1984 to 1997, a mindboggling stretch. And he certainly didn’t fight many stiffs. For example, his first two bouts with Hall of Famer Jeff Fenech are considered classics, the second (won by Nelson in Fenech’s native Australia) being named 1992 Ring Upset of the Year. He finished with a record of 18-4-2 in world title fights and 9-6-2 against opponents who would at some time wear a world title belt. In the end, after a one-fight comeback against Fenech when he was 49, Nelson settled permanently into retirement as arguably the greatest African fighter ever and a hero in his native land.

Quote: “He was full of confidence in the ring, so humble outside of it that he’s forever endeared himself to the people of Ghana. He is to Ghana what Manny Pacquiao is to the Phillipines: A national treasure,” said Kenneth Bouhairie, Founder and Media Director of BoxingAfrica.com.