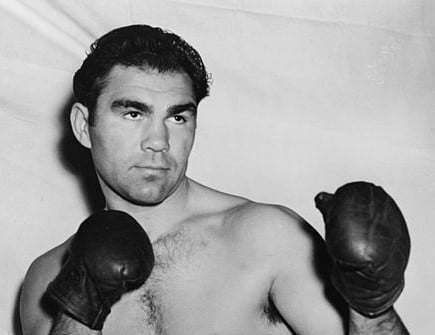 Background: Schmeling went from hero to goat in one of the darkest eras of human history but is remembered fondly for a great accomplishment and his kindness. The “Black Uhlan of the Rhine” won a series of fights in the U.S. to earn a bout with master boxer Jack Sharkey for the vacant heavyweight title. Sharkey was winning when he landed a punch below the belt and was disqualified, giving Schmeling the championship. He defended once – beating fellow Hall of Famer Young Stribling – but then lost a controversial split decision and his title to Sharkey and would never hold it again. Schmeling was 30 and deemed past his prime when a 22-year-old juggernaut named Joe Louis agreed to fight the former champion in 1936 at Yankee Stadium. Schmeling had said cryptically beforehand that “I see something” in Louis that he would exploit. And he did. He put Louis down and hurt him in Round 4 with a right hand over Louis’ left, which he held too low. Louis continued fighting bravely but was stopped in Round 12, making Schmeling an unwitting hero in Nazi Germany. Louis was chosen over Schmeling for a shot at James J. Braddock’s world title the following year and won. That set up one of the most important fights in history, Louis vs. Schmeling, good (U.S.) vs. evil (Nazi Germany). This time Louis handed out a historic beating, stopping his rival in only 124 seconds. Schmeling became a paratrooper at the outbreak of the war, survived and made a five-fight comeback in 1947-48 before retiring. He would become wealthy after opening a Coca Cola distributorship in Germany. And he became a lifelong friend of Louis. Schmeling reportedly paid for his rival’s funeral.

Quote: “Looking back, I’m almost happy I lost that fight,” said Schmeling, referring to the second Louis fight. “Just imagine if I would have come back to Germany with a victory. I had nothing to do with the Nazis, but they would have given me a medal. After the war, I might have been considered a war criminal.”