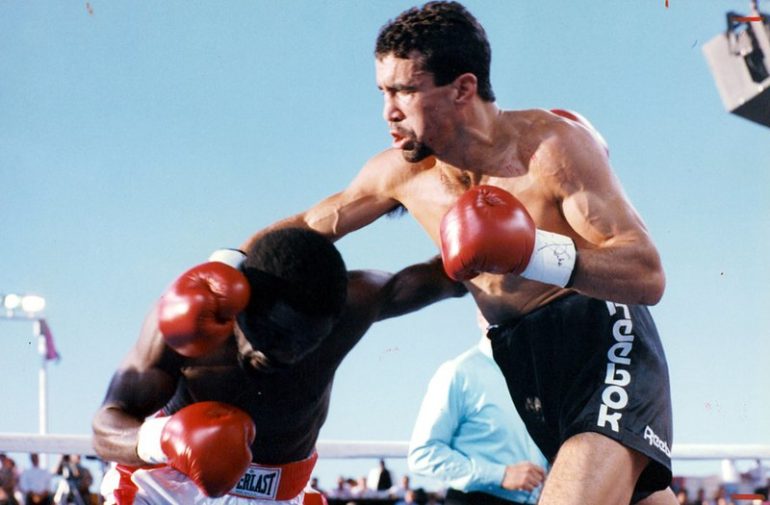 Fenech (right) on the attack against Azumah Nelson. Photo from The Ring archive
04
Oct
by Michael Rosenthal

Background: Fenech was a violent storm that swept across the boxing landscape for a decade-plus and left many victims in its wake. The “Marrickville Mauler” was a late starter, taking up boxing at 17, but also a natural whose inhuman conditioning and swarming style resulted in a Hall of Fame career. The 1984 Olympian won his first pro title in only his seventh fight (stopping Satoshi Shingaki as a bantamweight in 1985) and would add titles in two more divisions (knockouts of Samart Payakaroon and Victor Callejas) inside his first 20 fights. And he almost won a fourth belt in a classic for which he might be best remembered. Fenech traveled to Las Vegas to challenge junior lightweight titleholder and future Hall of Famer Azumah Nelson on the Mike Tyson-Donovan Ruddock II card in 1991, Fenech’s first fight outside of Australia. The challenger, attacking fiercely from beginning to end, seemed to do enough to claim a decision and his defining victory but had to settle for a dubious draw. The decision was booed and an angry Fenech stormed out of the ring. That was Fenech’s last great performance, as Nelson stopped him in the rematch in Melbourne and he lost to Philip Holiday in his final title shot. However, Fenech had already made an indelible mark as one of the toughest little men of all time.

Quote: “I never boxed until 17 and a half, I was in the Olympics at 19, and I was world champion when I was 20,” Fenech said. “I never watched a boxing match life in my life. The only boxer I had ever heard of was Muhammad Ali.”