20-20 vision – The greatest fighter from the Philippines: Manny Pacquiao 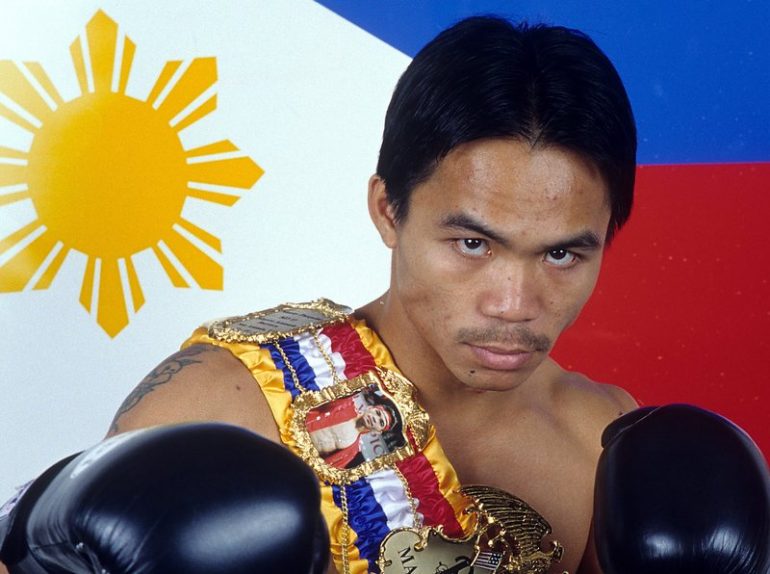 Photo from The Ring archive
14
Oct
by Michael Rosenthal

Background: No one could’ve imagined what was to come when the unknown Pacquiao stepped in on short notice to face rising star Lehlo Ledwaba in June 2001 in Las Vegas. The little Filipino, his busy feet and hands nothing more than blurs, stunned Ledwaba and those watching by stopping the South African in six rounds. A legend was born. Almost two decades later, Pacquiao is the only fighter in history to have won major titles in eight divisions – out of 17 total – and whose endearing humility has made him one of the most popular boxing figures ever. Pacquiao gained universal fame as a Mexican assassin, having built a final record of 6-2-1 against the great Mexican trio of Marco Antonio Barrera, Erik Morales and Juan Manuel Marquez. That alone would’ve been enough to get Pacquiao into the International Boxing Hall of Fame. But he accomplished so much more. He probably peaked in 2008 and 2009, when he knocked out in succession David Diaz, Oscar De La Hoya, Ricky Hatton and Miguel Cotto. That made him a god in the Philippines and a superstar worldwide. He rode the momentum by filling massive Cowboys Stadium in his next two fights, victories over Joshua Clottey and Antonio Margarito (to win a 154-pound title). He then beat Shane Mosley and Marquez back to back before troubles set in. In his next fight, Pacquiao seemed to outbox Tim Bradley but lost on the cards. Then, in his final fight with Marquez, a big right counter rendered him temporarily unconscious in one the most stunning moments in recent memory. Pacquiao could’ve walked away but there was more to do in boxing even though he had already been elected to public office. His overdue showdown with Floyd Mayweather in 2015 was disappointing but set pay-per-view records and earned him a ridiculous amount of money. Still, he had one more bit of drama up his sleeve. At 40, an age when few fighters can perform on a high level, Pacquiao outboxed and outworked Keith Thurman in July to win the WBA welterweight title and keep him more than relevant among 147-pounders. No one knows where Pacquiao will go from there but a lot of us learned something from the Thurman fight: Never, ever underestimate this remarkable man.

Quote: “I remember as a little boy I ate one meal a day and sometimes slept in the street,” Pacquiao said. “I will never forget that and it inspires me to fight hard, stay strong and remember all the people of my country, trying to achieve better for themselves.”

Next up: Puerto Rico