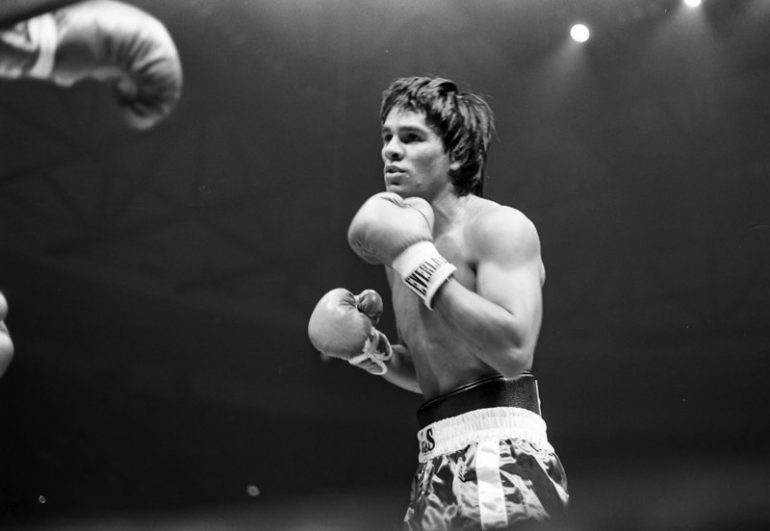 Photo from The Ring archive
13
Oct
by Michael Rosenthal

Background: “Hands of Stone” fought from 119 to 176 pounds over an epic 33-year career filled with great accomplishments and devoted fans worldwide, who were taken with his sublime ability combined with a temperament so fiery it seemed he would explode at any moment. Duran could’ve retired after his remarkable seven-year run as lightweight titleholder in 1978 and been considered an all-time great. After all, he was 63-1 when he moved to welterweight and arguably the greatest 135-pounder ever. Instead, many of his greatest performances lay ahead. Perhaps his best took place in June 1980, when he fought undefeated American star Sugar Ray Leonard for a 147-pound title in Montreal. Duran had used insults to goad Leonard into a fire fight and the former Olympic champion paid a price, losing a close decision. Leonard got his revenge in the immediate rematch, the “No Mas” fight. Leonard’s stick-and-move tactics and showboating humiliated the proud Panamanian, who decided to quit rather than endure more embarrassment. Afterward, he was vilified by some fans – even some back home – but he was able to rebuild his reputation, although his career was up and down after that point. He lost back to back fights against fellow Hall of Famer Wilfredo Benitez and Kirkland Laing but bounced back to stop Pipino Cuevas and Davey Moore in succession. He then gave Marvin Hagler more trouble than expected in defeat before he was brutally knocked out in two rounds by Thomas Hearns. Duran was finished, right? Wrong. He was 37 and two decades into his career when he was allowed to challenge Iran Barkley – who had just stopped Hearns – for his middleweight title in 1989 in Atlantic City. Duran turned back the clock one last time, outboxing and outslugging the naturally bigger man to win a split decision and add a middleweight championship to his collection. “I am like a bottle of wine,” Duran said. “The older I get, the better I get.” Well, not necessarily. He fought for another decade-plus, accomplishing little, but he was already a legend. Duran’s name is still spoken with reverence.

Quote: “I am not an animal in my personal life,” Duran said. “But in the ring there is an animal inside me. Sometimes it roars when the first bell rings. Sometimes it springs out later in a fight. But I can always feel it there, driving me and pushing me forward. It is what makes me win. It makes me enjoy fighting.”