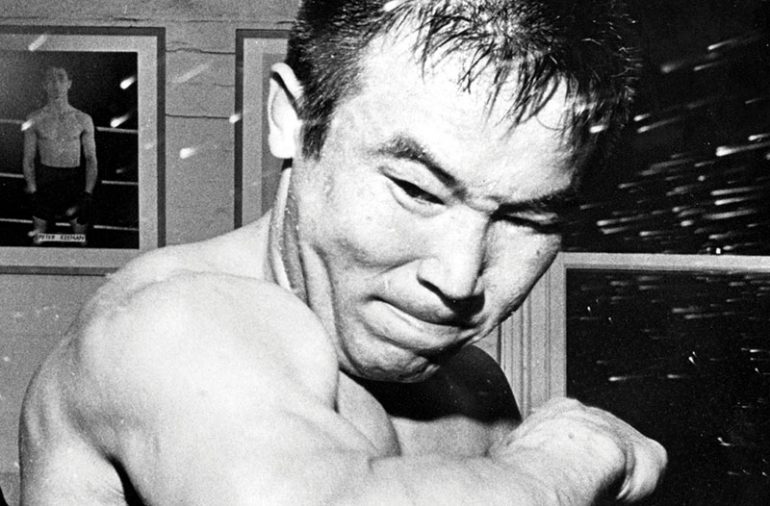 Fighting Harada, aka Masahiko Harada, prior to challenging for the featherweight world title in 1969. (Photo by Central Press/Getty Images)
11
Oct
by Michael Rosenthal

Background: Masahiko “Fighting” Harada, the son of a Tokyo landscaper, became a professional boxer at the tender age of 16 and learned quickly. The aggressive, volume-punching whirlwind was only 19 years old when he knocked out Thai star Pone Kingpetch in the 11th round to win the world flyweight title in 1962 in Tokyo. Kingpetch won the immediate rematch by a majority decision before a hostile crowd in Bangkok but many who witnessed the fight believed Harada was robbed. No problem. Harada, who had trouble making the flyweight limit, moved up to bantamweight and continue to win. That run of success led to the two-fight series that define Harada as a great fighter. Eder Jofre, among the top pound-for-pound fighters, was the world 118-pound champion and undefeated when he went to Japan to defend against Harada in May 1965. The Tokyo punching machine built a big lead early and held on to beat the great Brazilian and fellow Hall of Famer by a split decision and become the first to win both flyweight and bantamweight titles. He then outpointed Jofre in the rematch the following year. Those are the only losses on Jofre’s record. Harada lost his title by a close, but unanimous decision to Lionel Rose in 1968 and immediately moved up to featherweight with what he called a “Triple Crown” in mind, a title in a third division. Harada got his chance against Australian Johnny Famechon in 1969 in Sydney. Harada put the Aussie down three times – and went down once himself – but lost a close, controversial decision. He came up short against Famechon again in a rematch and then retired as his country’s greatest champion.

Quote: “(Harada) had a lot of velocity in his arms, reaching to hit me recklessly several times. It was a style of his own that hindered the opponent when he tried to hit him,” Jofre told The Ring.