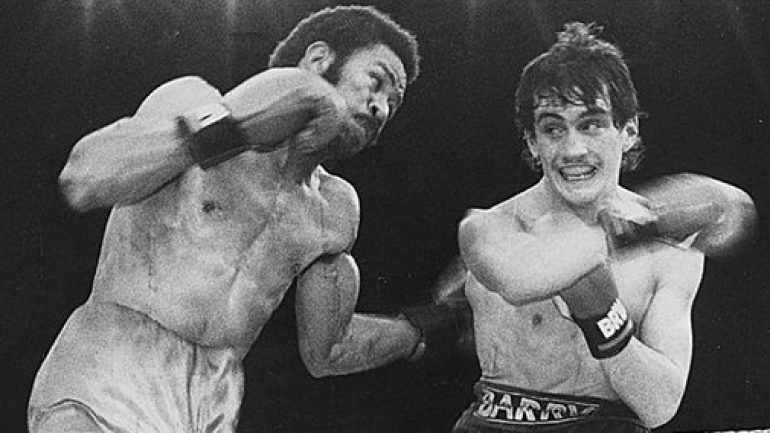 Background: The process of selecting the greatest fighter from Ireland was particularly difficult, as no one was an obvious choice. A case could be made for such champions as Mike McTigue and Steve Collins, among others. One thing seems certain, though: No Irish fighter made a bigger impact on his homeland than Barry McGuigan. He was born in Clones, County Monaghan, near the border that separates the Republic of Ireland from Northern Ireland. That seems fitting given the unifying role he would play during The Troubles period – the Northern Ireland conflict – in the latter country, which is part of the United Kingdom. McGuigan was a good amateur, representing Ireland in the 1980 Olympics, but found his greatest success as a pro. He built his reputation – and rabid fan base – as a dynamic, hard-punching prospect primarily in Belfast venues before evolving into a legitimate contender. “The Clones Cyclone” won British and European titles but recorded his first high-profile victory over former 126-pound champion Juan LaPorte in 1985. Two months later came the greatest moment of his career. An estimated 26,000 crammed into Loftus Road Stadium in London, home of the Queens Park Rangers, to watch McGuigan challenge fellow Hall of Famer and longtime featherweight champion Eusebio Pedroza. The Panamanian, one of the best fighters of his era, had made a remarkable 19 consecutive defenses going into the fight. And the run would end there. McGuigan gave a brilliant performance in front of a wildly supportive crowd, including a knockdown of Pedroza in Round 7, to win the 126-pound championship by a unanimous decision. Tens of thousands of adoring fans – up to a quarter million total – gave McGuigan a hero’s welcome in homecomings to Belfast, Clones and Dublin but his appeal was more universal than that. In a time of Catholics vs. Protestants, British vs. Irish, everyone loved Barry McGuigan. He lost his title to underdog Stevie Cruz in the energy-sapping sun of Las Vegas two fights later but he had already left his mark as an Irish legend.

Quote: “Long-standing violence between Catholics and Protestants subsided when McGuigan stepped in the ring. The popular saying of the day was, ‘Leave the fighting to McGuigan,’” the International Boxing Hall of Fame.

(Note: Only boxers from the Republic of Ireland were included here. Those from Northern Ireland – as well as England, Scotland and Wales – will be considered for the United Kingdom entry later in this series.)