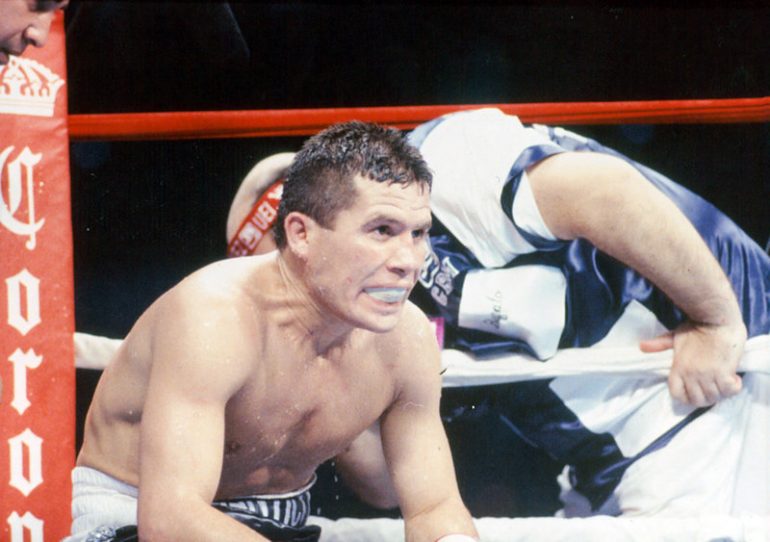 Photo from The Ring archive
12
Oct
by Michael Rosenthal

Background: JCC was bigger than boxing. Heck, he was bigger than life. He fought his way out of poverty to become the greatest boxer in his boxing-crazy country and a beloved icon of the Mexican people, who continue to revere him. His career reads like fiction. He won his first 87 fights, at which point he controversially drew with fellow Hall of Famer Pernell Whitaker. He won seven major titles in three weight classes. And, most important, he gave his fans one thrill after another over two glorious decades. Chavez wasn’t a one-punch knockout artist but he was a destroyer who could chase down almost any opponent nonetheless, as his 87 knockouts illustrate. He could box, he could punch (oh, those midsections he pulverized) and he might’ve had the greatest chin in the history of the sport. He had so many great moments. He stopped capable Mario Martinez to win his first title in 1984. Three fights later he knocked out Roger Mayweather for the first of two times. And the demolition continued regardless of the level of opposition. Perhaps his greatest moment came in March 1990, when, behind on the cards, he stopped Meldrick Taylor with 2 seconds remaining in their classic fight. He evolved that night from a great boxer to something beyond that – magician? – which cemented his place in the hearts of fans. Of course, the magic was destined to end. Frankie Randall would hand a 31-year-old Chavez his first loss, a split decision in 1994. And while he avenged that setback, his years of winning his biggest fights were behind him. He was bloodied and stopped by young star Oscar De La Hoya in a passing-of-the-torch fight in June 1996. And he was stopped again by De La Hoya two years later. He fought once more for a major title but lost to another young star, Kostya Tszyu, in 2000. Chavez would fight a few more times before finally stepping away. Few fighters in history have built a legacy of success in the ring combined with the ability to touch legions on a profound level outside it the way Chavez did.

Quote: “I wasn’t a fan of boxing, I was a fan of Julio Cesar Chavez. All of Mexico stopped to watch his fights. Old, young, left, right and center,” said Diego Luna, Mexican actor, director and producer.