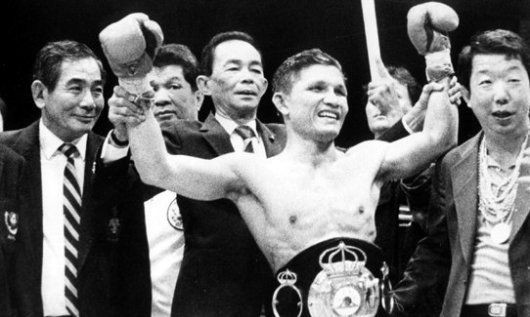 Background: Some people at the mid-1980s described Galaxy as a smaller, left-handed version of heavyweight juggernaut Mike Tyson, who knocked out one opponent after another in the U.S. when Galaxy was doing the same in Asia. It was apt comparison. The former Muay Thai master was a relentless stalker with the crushing power required to take out almost any opponent, a la a prime Tyson. Galaxy targeted the body more than Iron Mike did but the result was the same, a long list of KO victims. That’s how he was able to dominate the junior bantamweight division for seven years in the 1980s and early ’90s, arguably becoming the greatest 115-pounder ever in the process. Sohla Saenghom (Galaxy’s real name) lost a 10-round decision to Sakda Saksuree for the Thai bantamweight title in his seventh fight. He never lost again, going 41-0 (with 37 knockouts) the remainder of his career. He eviscerated the then–unbeaten Dominican fighter Eusebio Espinal in the sixth round to win the vacant WBA championship in 1984 in Bangkok and would successfully defend a remarkable 19 times (16 knockouts), fighting almost exclusively in Asia. “Khaosai was a ferocious puncher, and he never stopped coming forward,” Espinal said in admiration after their title fight. It was during his run as champion that Khaokor Galaxy held a bantamweight title, making he and Khaosai the first set of twins to hold major titles. Khaosai Galaxy had announced that his 19th title defense against Armando Castro in December 1991 in the Thai capital would be his final fight. An estimated 11,000 packed Bangkok’s Thepsapin Stadium and Galaxy, who had become one of his country’s greatest sporting heroes, received gifts for 35 minutes before he easily outpointed Castro. What a way to go out.

Quote: “Thailand’s greatest boxer … was acknowledged by many as the best and most significant 115-pounder in history, as well as one of the greatest fighters from Asia,” said the International Boxing Hall of Fame, in which Galaxy was inducted in 1999.