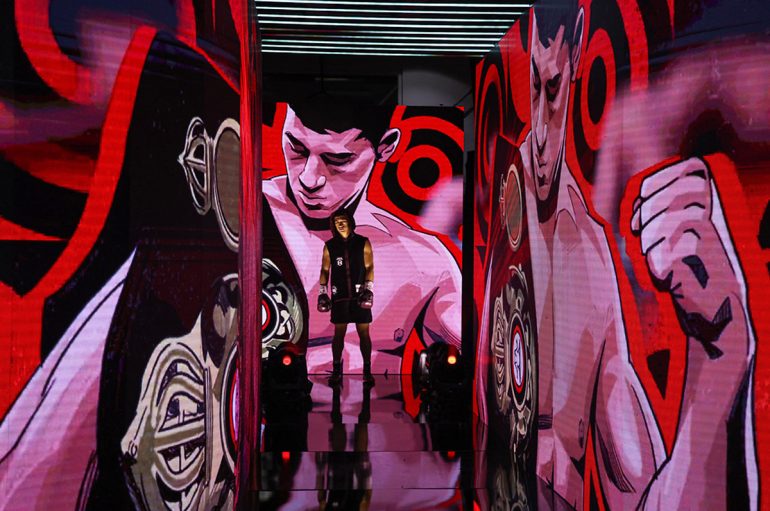 Above: Dmitry Bivol, here walking in for what would be a career-defining victory over Canelo Alvarez, is surrounded by the political chaos of Russia’s invasion of Ukraine. (Photo by Ed Mulholland/Matchroom)

Time’s 2022 Person of the Year is Vlodymyr Zelensky. The venerable American news magazine recognized Ukraine’s charismatic president for his leadership – as well as the people who represent “The Spirit” of the beleaguered country – in the face of the Russian invasion that began last February.

The Ring’s 2022 Fighter of the Year is Dmitry Bivol, a Russian boxer.

Is this a bad look for the Bible of Boxing? Should we have considered one of the other nominees for Fighter of the Year given Bivol’s nationality?

Well, whether we should have or not, we didn’t. The thought never crossed my mind during the final weeks of 2022. Senior editor Brian Harty brought it to my attention while copy editing Steve Kim’s cover story for this issue. Is it hypocritical, Harty asked, to award our highest individual annual award to a Russian the same year that we honored Ukrainian boxers as the Most Inspirational of 2022?

Harty reminded me that we featured the Klitschko brothers on the cover of the July 2022 issue of The Ring, acknowledging and commending the former heavyweight champions for their prominent roles in rallying Ukraine and the rest of the world against Russia’s tyranny. 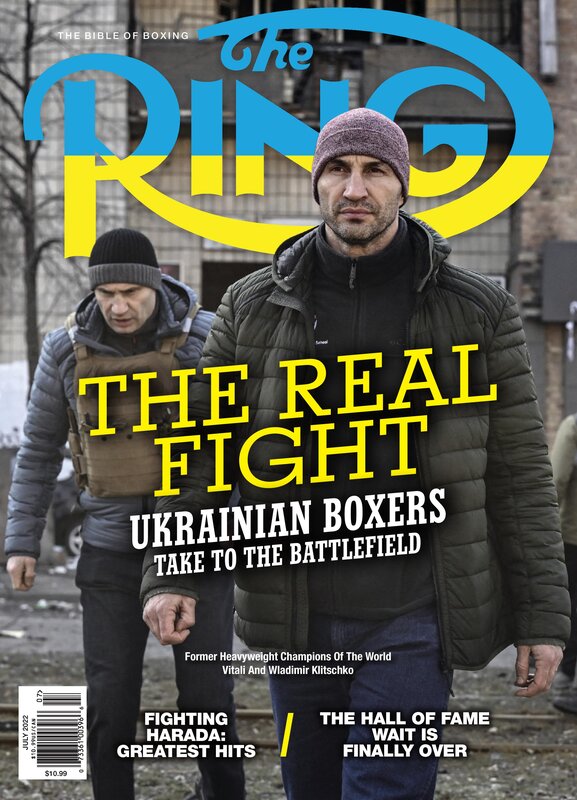 I couldn’t imagine Wladimir (who I dedicated that issue’s Ringside column to) or Vitali being  thrilled about our Fighter-of-the-Year choice, but I didn’t feel right about denying Bivol the award.

The 32-year-old light heavyweight titleholder deserved the honor more than anyone else. The only thing I thought of when considering Bivol was what he did in the ring. I didn’t think about his nationality or his ethnicity (Moldovan and Korean) or where he was born (Kyrgyzstan) or where he currently lives and trains (Southern California). I thought about how he dominated Canelo Alvarez and Gilberto Ramirez, and damn it, he earned that award.

I wasn’t alone in that opinion.

The vast majority of fans and media had no issue with Bivol being the consensus male Fighter-of-the-Year selection among the major sports publications and news agencies – such as ESPN, Sports Illustrated and Yahoo! Sports – as well as all of the established boxing websites.

There was no backlash when the Boxing Writers Association of America announced that its members had overwhelmingly voted for Bivol, the first Russian boxer to win the honor in the organization’s 84-year history of the award, on January 9.

And there were no negative comments under The Ring’s Fighter-of-the-Year announcement on RingTV.com on January 13. There wasn’t a hint of social media outrage.

I was relieved, but should I have been?

The boxing world has historically ignored problematic issues – organized crime figures managing fighters, the biggest events hosted in countries with awful human rights records, star attractions being allowed to fight despite domestic violence abuses – all for the sake of money and business.

But just because the industry and its various sycophants among fandom and media turn a blind eye to uncomfortable truths, it doesn’t mean we should do the same.

The World Boxing Council catches a lot of hell from fans, sometimes rightfully so, but the Mexico City-based title-belt organization proved to have an awareness (and conscience) beyond the boxing business when it joined much of the free world’s sweeping economic sanctions imposed on Russia and its ally nation Belarus.

I couldn’t imagine Wladimir or Vitali Klitschko being thrilled about our Fighter-of-the-Year choice, but I didn’t feel right about denying Bivol the award.

In November, during its annual convention, the WBC passed a ruling immediately removing boxers from Russia and Belarus from its world ratings. The 60-year-old sanctioning organization also declared that citizens from either country would not be allowed to fight for the WBC world title anywhere in the world. (It goes without saying that the WBC will not sanction world title bouts in either country while the war continues.)

It was a bold move that I had mixed feelings about. On one hand, I applauded the WBC’s solidarity with Ukraine’s allies. If all of these sanctions are putting a significant dent in Russia’s military industrial complex – and I sincerely hope so – I’m all for it.

However, if I’m being completely honest, I have always found it upsetting when athletes are punished by politics that are beyond their control. 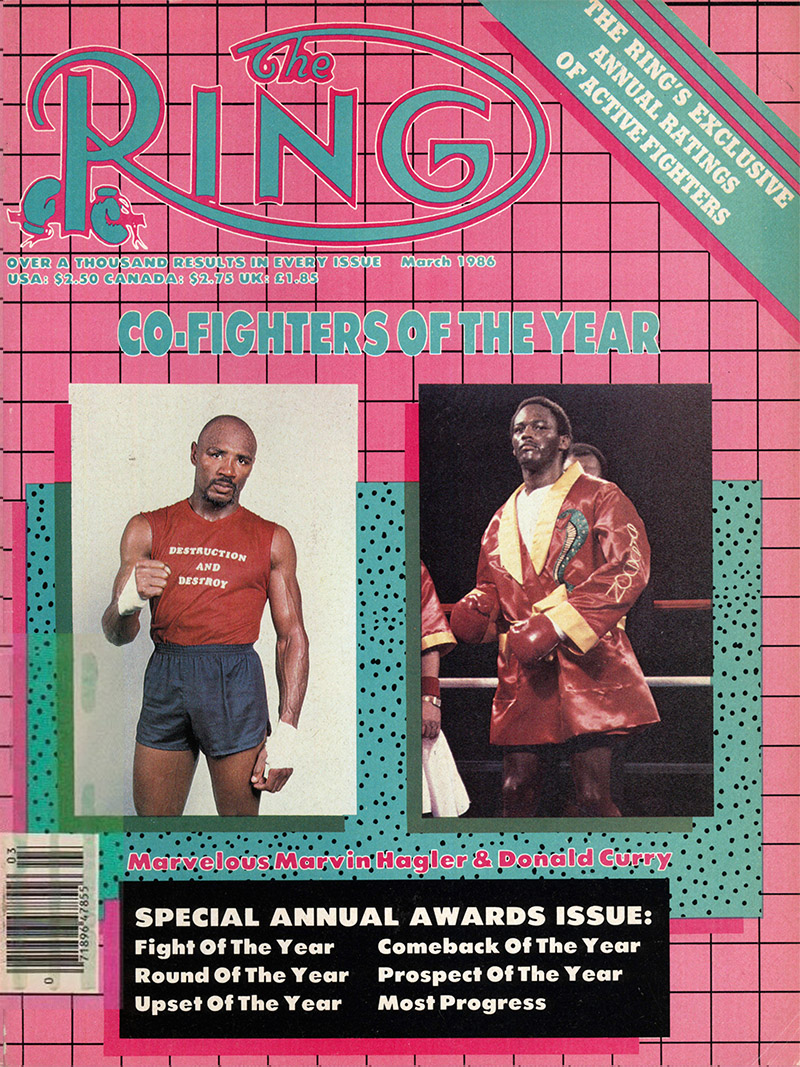 Donald Curry was The Ring’s co-Fighter of the Year in 1985. Could he have won gold in the 1980 Olympics?

As a young fan, and even to this day, it irks me that American amateur standouts – including Donald Curry, Richie Sandoval, Bernard Taylor, Johnny Bumphus, LeRoy Murphy and Jackie Beard – never received the opportunity to compete at the 1980 Olympic tournament due to the U.S. boycott of the Moscow Summer Games (in response to the Soviet Union’s invasion of Afghanistan). They were tremendous talents who had proven to be among the best boxers in the world during the late 1970s, but they were denied the opportunity to showcase their skills on the largest stage for amateur sports. The six I mentioned all went on to have successful pro careers – all challenged for world titles; only Taylor and Beard failed to win major belts – and Curry was recently inducted into the IBHOF, but we’ll never know if they could have achieved Olympic glory or how much a bronze, silver or gold medal could have enhanced their marketability and star potential in the pro ranks.

Boxers don’t have much time to make money or forge legacies; most are fortunate to have primes that last three or four years. So why jeopardize the careers of Russian boxers if they aren’t in public support of Vladimir Putin and his mad territory grab?

That was my thinking entering 2023. But the day after The Ring announced its Fighter of the Year, a Russian missile strike on an apartment block in the Ukrainian city of Dnipro served as a grim reminder that the war continues to ravage the country 11 months after the invasion began.

I was made aware of the Dnipro attack, which included a hit on a nine-story housing unit resulting in at least 40 civilian deaths, while interviewing Ukrainian up-and-comer Serhii Bohachuk at a media workout on that Saturday, January 14.

With this column in mind, I asked for Bohachuck’s thoughts on the WBC’s ban on Russians/Belarussians and his opinion on a Russian boxer winning the highest annual award; and while the 27-year-old junior middleweight did not denounce Bivol’s Fighter-of-the-Year selection, he wholeheartedly expressed his support of the sanction organization’s decision. 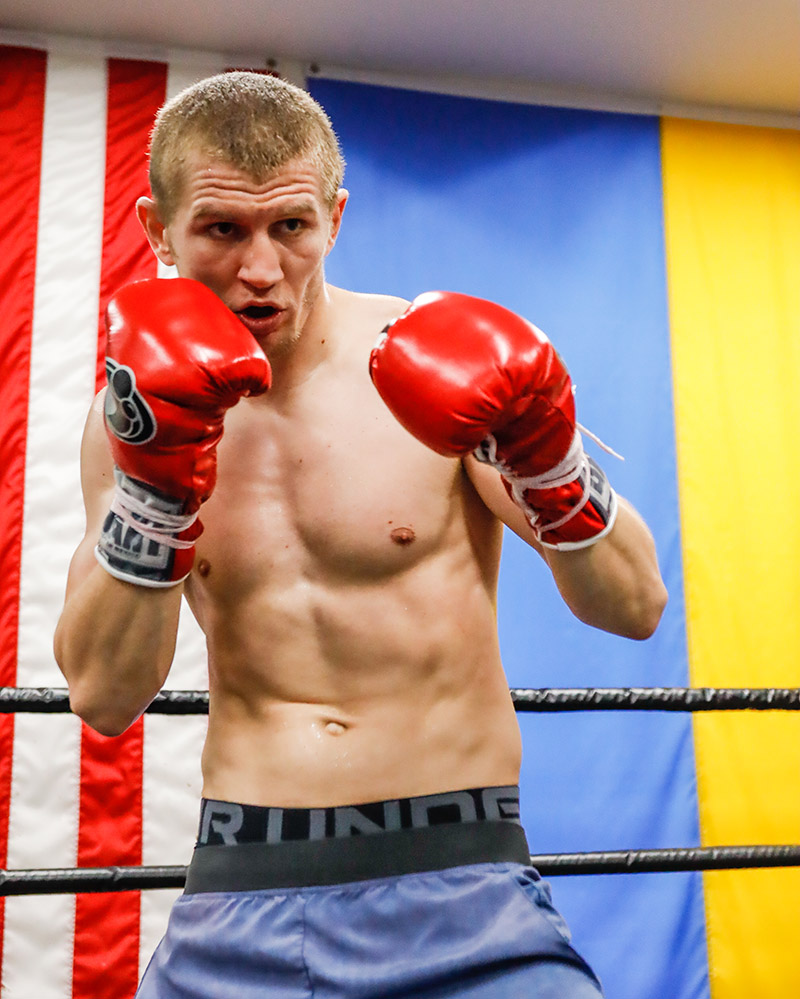 “I was at the WBC’s convention in Acapulco (Mexico) where they made that announcement and it made me feel good,” said Bohachuk, who spent most of 2022 in his hometown of Vinnytsia, where he witnessed civilian casualties.

“It gave me hope because I think a lot of people have stopped paying attention to what is going on in my country. I think a lot of people don’t understand the situation. It’s not just an invasion. It’s not a war. It is terrorism. Russia is targeting civilians. Women, children, old people are being injured and killed. It’s happening in my city. They are bombarding Ukraine everywhere, every day. It just happened today in Dnipro.”

Bohachuk’s girlfriend, Iryna Pasichnyk, also from Vinnytsia, showed me live news footage of the bombed-out apartment complex on her phone.

I followed major U.S. cable news coverage of the war when it first broke out and I remained in touch with what was happening through longtime friend Tom Loeffler, who was the managing director of the Klitschkos’ K2 Promotions during the hall of farmers’ title reigns. Loeffler remains close to the brothers and currently promotes Bohachuk, so I get periodic updates whenever we get together, but it hits differently when the devastation is seen in real time with a Ukrainian citizen.

“The Russians are terrorists,” Bohachuk continued. “I think the sanctions are a good thing. Everyone needs to be involved. With enough sanctions, maybe we can stop this madness.

“I don’t have anything bad to say about Russian boxers, or Bivol or (Artur) Beterbiev, who says he’s not Russian. He says he’s from Dagestan. He says he’s a Canadian citizen now. Right? But come on. This is your country, your responsibility. Nobody can say it’s not political, especially the Russian people. They need to say it’s wrong.”

Given the number of Russian activists and journalists who have paid the ultimate price for speaking out against their government over the decades, I wouldn’t demand that prominent Russian boxers, especially those living there or with family living there, rip into Putin every time they are interviewed.

However, I was touched by Bohachuk’s words and Iryna’s emotion. It was a reminder that sports cannot be completely separated from politics, even if we want to keep them apart.

The Ring can say – through editorials and more in-depth interviews with fighters like Bohachuk – that the Russian invasion of Ukraine is wrong. And we will continue to cover what is happening in Ukraine, from the boxing perspective, until the conflict comes to an end, which is hopefully soon.

Doug Fischer is Editor-in-Chief of The Ring Magazine.