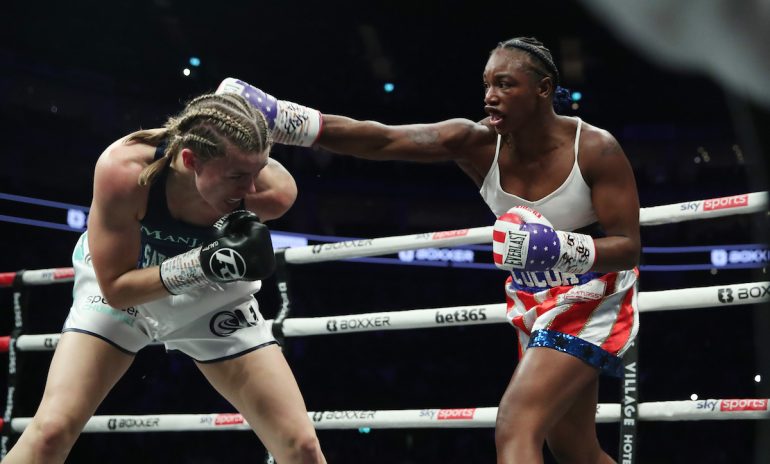 After years in the shadows, the sport of women’s boxing finally had its breakthrough year in 2022. Sure, there have been flashes of light during the sport’s history, like Christy Martin’s appearance on the cover of Sports Illustrated, the emergence of Laila Ali and the introduction of women’s boxing to the Olympic Games. But in 2022, everything came together. From the epic Katie Taylor-Amanda Serrano bout headlining Madison Square Garden (and providing million-dollar paychecks for both fighters) to several unification matchups getting the high-profile treatment, the ladies of the sweeter science finally got their due. Is there still work to be done? Absolutely, but at least now the light at the end of the tunnel isn’t a train.

So what were the best moments of the best year in women’s boxing history? The Ring polled its Women’s Ratings Panel to find out. 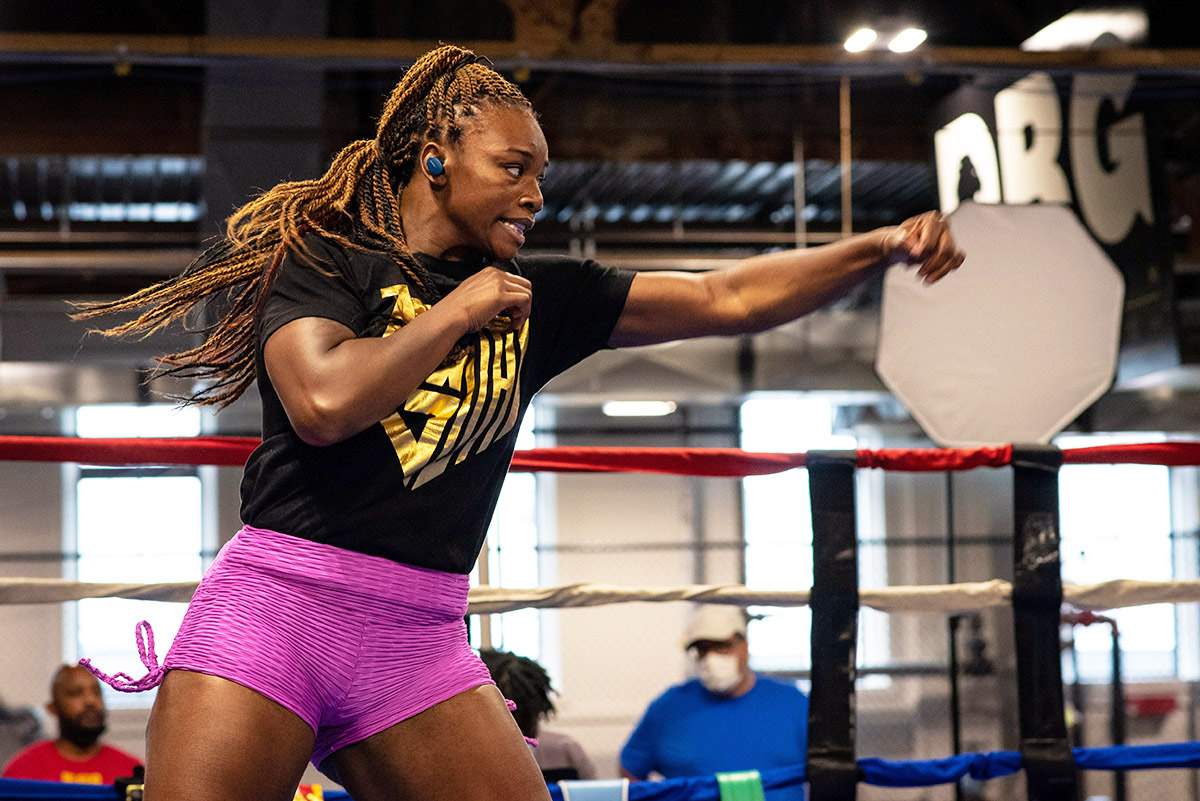 Fighter of the Year – Claressa Shields

For years, Claressa Shields has been telling us that she is the GWOAT (Greatest Woman of All Time) when it comes to her sport. Well, in 2022, she may have proved her point, because despite her two Olympic gold medals and a host of world titles in the pro ranks, there hasn’t been that defining fight for the pride of Flint, Michigan. But after another dominant effort in a unified middleweight title fight against previously unbeaten Ema Kozin in February, the 27-year-old Ring champ made the trip to London to face the only woman ever to beat her in a boxing ring, amateur rival Savannah Marshall, for all the belts at 160 pounds. Heading into the bout, many believed the fight was a pick-‘em affair, and it was competitive throughout, earning it a couple Fight of the Year nods. But for 10 rounds in her toughest test to date, Shields was brilliant. And though it was a close race for FOTY honors, Shields was the cream of the crop. 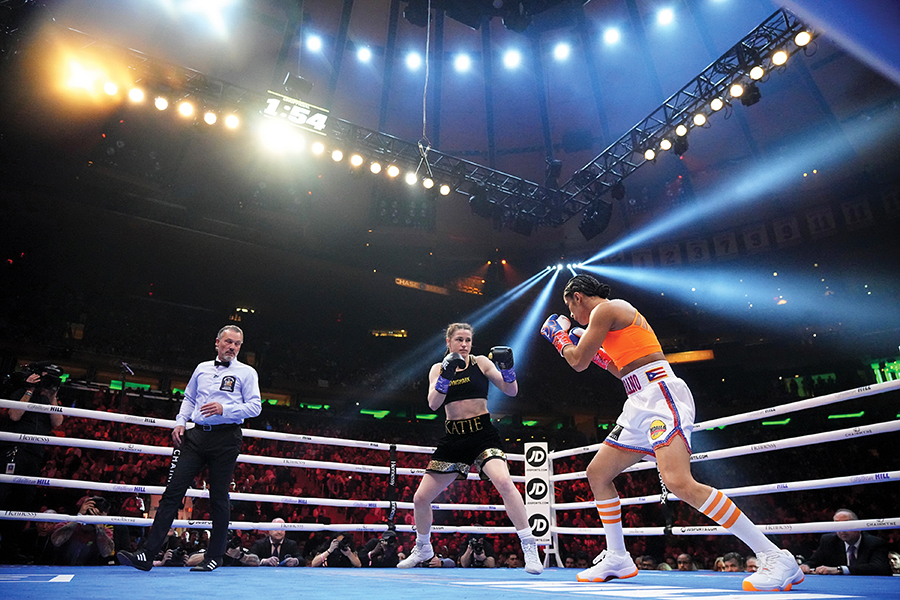 It’s a sad part of life as a boxing fan that the superfights often don’t result in, well, super fights. So the optimism that the Katie Taylor-Amanda Serrano bout at Madison Square Garden would deliver in April was cautious at best. But as soon as the ring walks began, the atmosphere in the Mecca of Boxing was something no one would ever forget, with Irish and Puerto Rican fans lifting the roof off the place with their cheers. Then the ladies took over and gave 10 rounds of heart, skill, grit and whatever other words you can come up with to describe not just the best women’s fight of 2022, but in this scribe’s opinion, the best fight of 2022. And though Taylor got the win via split decision, I’ll have to pull the old cliché out that there were no losers in this one. 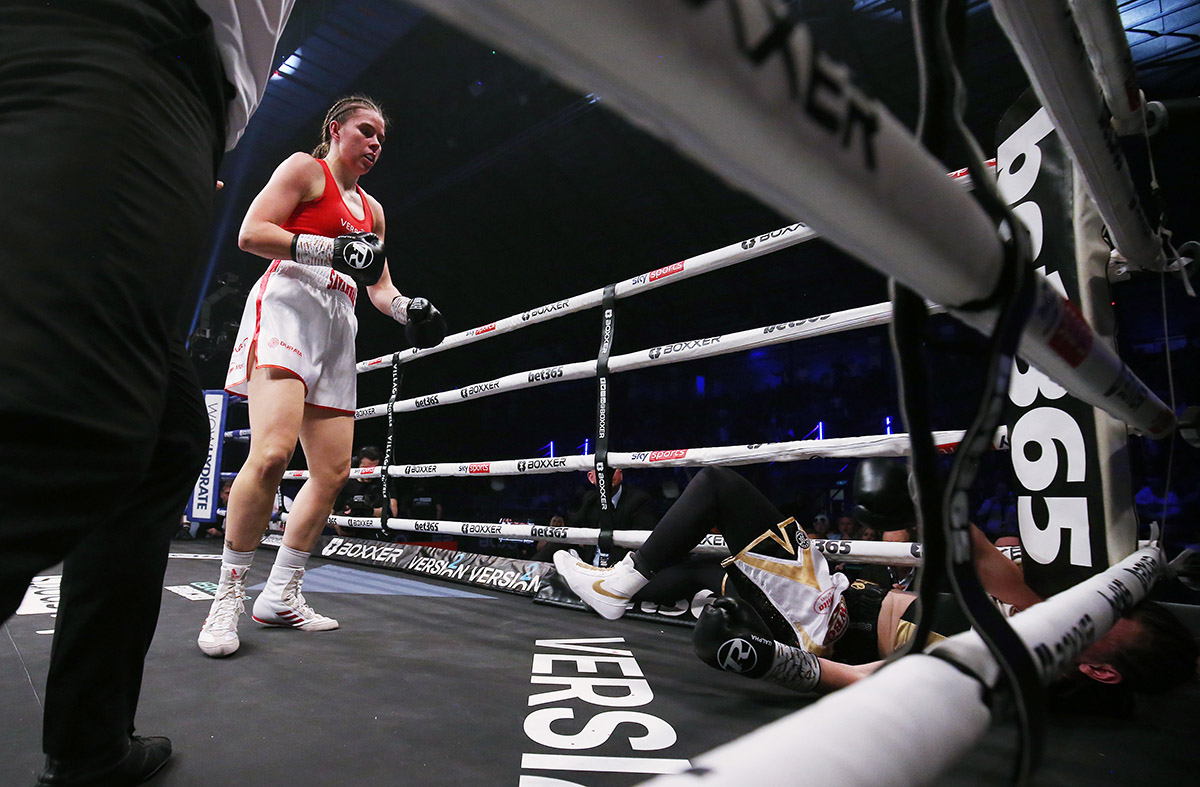 Want to know why many believed Savannah Marshall would beat Claressa Shields? Take one look at her April knockout of Femke Hermans and just nod your head and say, “Yes, I get it.” Already in total control against the veteran from Belgium, Marshall lowered the boom in the third round with a single left hook that ended the fight without even a count from referee Howard Foster. Considering Hermans had gone the distance with Shields and had never been stopped before, this was a statement. 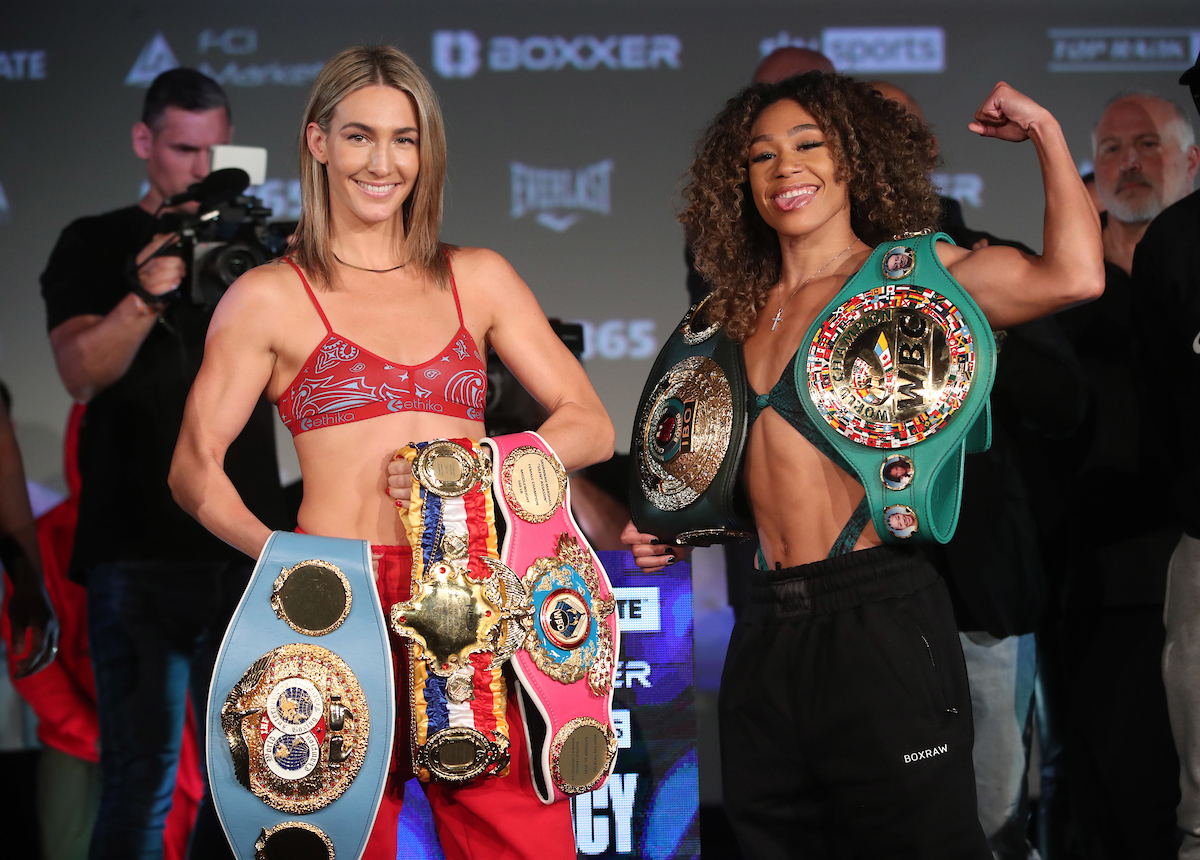 Mayer (left) and Baumgardner weigh in. (Photo by Lawrence Lustig)

It’s been a wild ride for Alycia Baumgardner since she turned pro in 2017. First she was the greatest thing since pizza, then a loss to Christina Linardatou in 2018 and injuries slowed her progress for nearly two years. She returned in 2021, stunned Terri Harper in November of that year to win the WBC belt at 130 pounds, and all appeared to be well. But there were still a lot of skeptics when she jumped into a unification fight with Ring/IBF/WBO champion Mikaela Mayer in October. But Baumgardner proved to be up to the task, and while her split decision victory was controversial in some circles, a win’s a win, and she proved that she belongs with the best in the game.

Round of the Year – 10th Round, Katie Taylor vs. Amanda Serrano

After giving everything they had for nine rounds, Katie Taylor and Amanda Serrano could have coasted in the final frame of their April fight and no one would have complained. But with the fight as close as it was, both assumed that the 10th might decide it, and they fought accordingly, going blow-for-blow until the final 30 seconds, when they turned it up a notch for an epic finish that nearly saw Taylor hit the canvas before the bell sounded. Watch it again and I dare you not to get chills.

Prospect of the Year – Caroline Dubois

Her brother Daniel may get the bulk of the attention for the family, but in 2022, former amateur star Caroline Dubois made her presence known in the pro ranks with five wins and four knockouts. The southpaw from London has been campaigning between 135 and 140 pounds, meaning that when she likely steps up her level of competition in 2023, there will be plenty of intriguing fights. And considering that she’s only 21, she may very well surpass her brother for bragging rights by the time it’s all said and done. 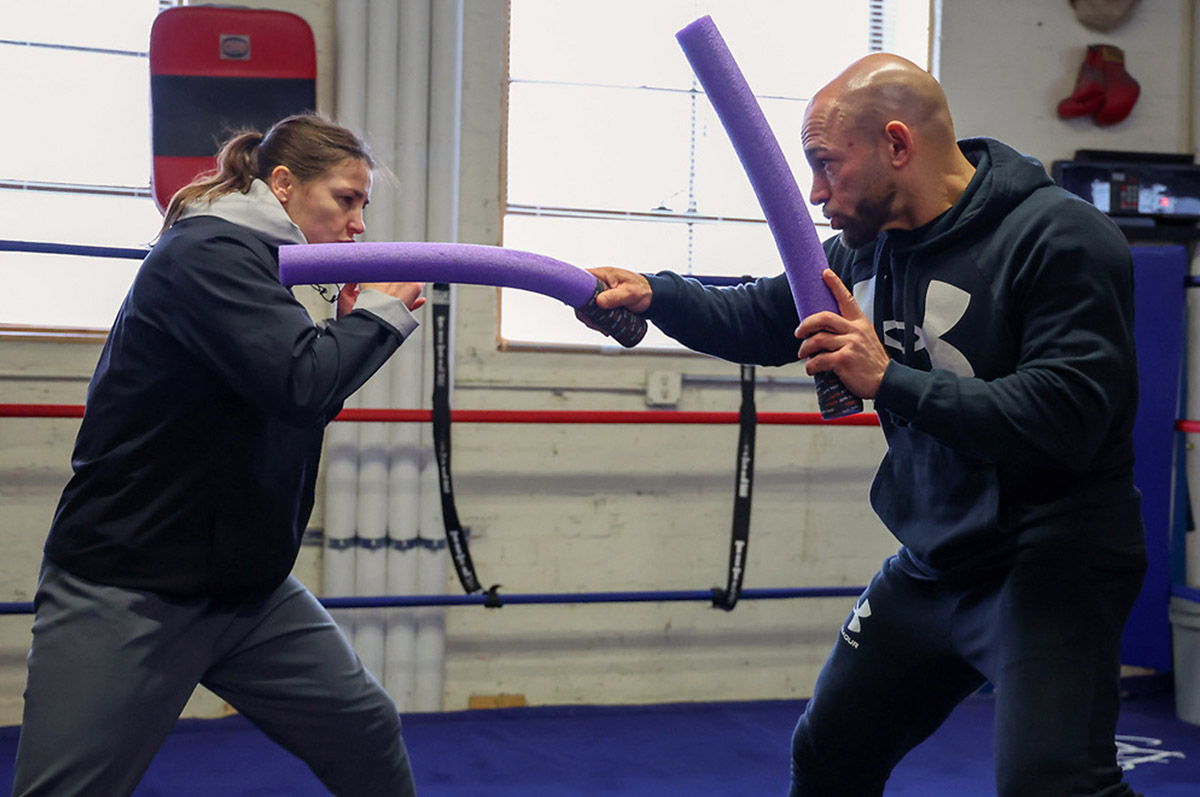 Trainer of the Year – Ross Enamait

As low-key as it gets in the “look at me” world of professional sports, Ross Enamait never goes looking for a camera, a microphone or a flashy social media post. The Connecticut trainer is all about the work, and that work is finally getting him some overdue praise thanks to the success of Katie Taylor, who had Enamait getting her through the rough patches in her Fight of the Year win over Amanda Serrano.

Event of the Year – Katie Taylor vs. Amanda Serrano at Madison Square Garden

The big fights have a certain buzz to them, not just on fight night but all week, and that was the case when Katie Taylor and Amanda Serrano came to New York City for a showdown that often looked like it never would happen. But it did, and when Saturday night rolled around, the Garden was as loud as it’s ever been, and when you add in the noise and the Irish and Puerto Rican flags waving to the war being waged between the ropes, it was something unlike anything seen in women’s boxing. Ever. 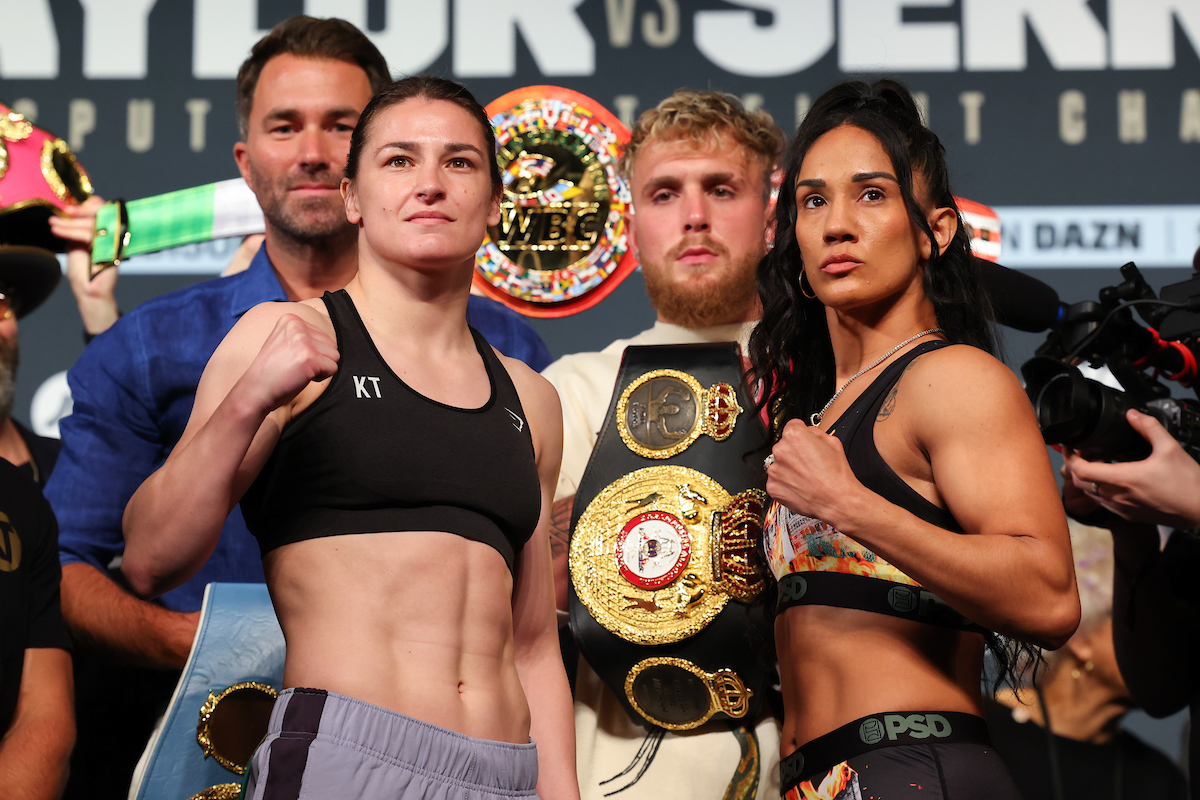 Taylor and Serrano at the weigh-in. (Photo by Ed Mulholland/Matchroom)

Controversy sells. Sex sells. Bad blood sells. But how did Katie Taylor and Amanda Serrano sell their April fight to the masses that packed Madison Square Garden and bought DAZN subscriptions to watch it? With their talent and their class. There was no pre-fight nonsense between these two, no post-fight cries about the decision from Team Serrano, just two fighters making history for their sport with the whole world watching. That’s not easy. But as Taylor told me the week after the fight, “I think we both elevated the sport and lifted it to a new level. Over the years, both of us have broken down so many barriers to get to this point, and this fight will have inspired so many young girls. That’s the most satisfying thing for me about this whole journey. Everyone talks about Ali and Frazier when it comes to boxing at Madison Square Garden, and now our fight will be included in those conversations as well for decades to come.”