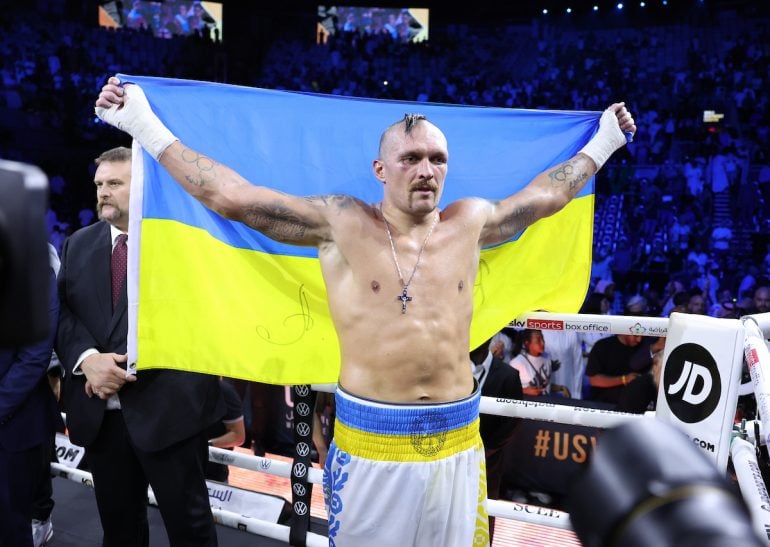 Photo above: Oleksandr Usyk raises the Ukrainian flag after his second victory over Anthony Joshua in Saudi Arabia. (Photo by Mark Robinson/Matchroom)

So many fighters say the same thing. “I’m ready to die if necessary,” they publicly pronounce, and some might even believe it. But while bravery is as much a staple of winning boxing as talent, answering the bell against even the most fearsome puncher is not the same as a soldier charging a machine-gun nest or engaging in hand-to-hand combat with an enemy who is actually trying to end his life, not just to knock him out. A fighter’s fortitude and strength of character certainly are tested in the ring, but all the convenient comparisons to war go way too far. Boxing is a sport, and not one for the faint of heart, but it is never a matter of kill-or-be-killed. At least it shouldn’t be.

I wrote that opening paragraph for a story I authored in November 2015, but the words eerily took on a chilling and more consequential meaning on February 24 of this year, when Russia launched its full-scale invasion of Ukraine, a conflict of nearly a year’s duration which to date has resulted in thousands of deaths, both civilian and military, and billions of dollars in property damage. But underdogs can and do win some fights, in the ring or outside of it, and the outgunned, outmanned Ukrainian defense forces valiantly have resisted the Russian army’s collective might and, in some instances, have driven back the invaders, earning the admiration of many in the global community.

For answering a call to duty borne of patriotic pride and love of their homeland, all Ukrainian boxers – a roll call which includes reigning world champions, former world champions and possible future world champions – can collectively claim another title: Most Inspirational Boxing Figures for 2022. The foremost names on that list include such celebrated fighters as Ring/IBF/WBA/WBO heavyweight champion Oleksandr Usyk, former three-division champ Vasiliy Lomachenko and retired former heavyweight rulers Wladimir and Vitali Klitschko, the latter serving as mayor of Ukraine’s capital city of Kyiv since 2014. 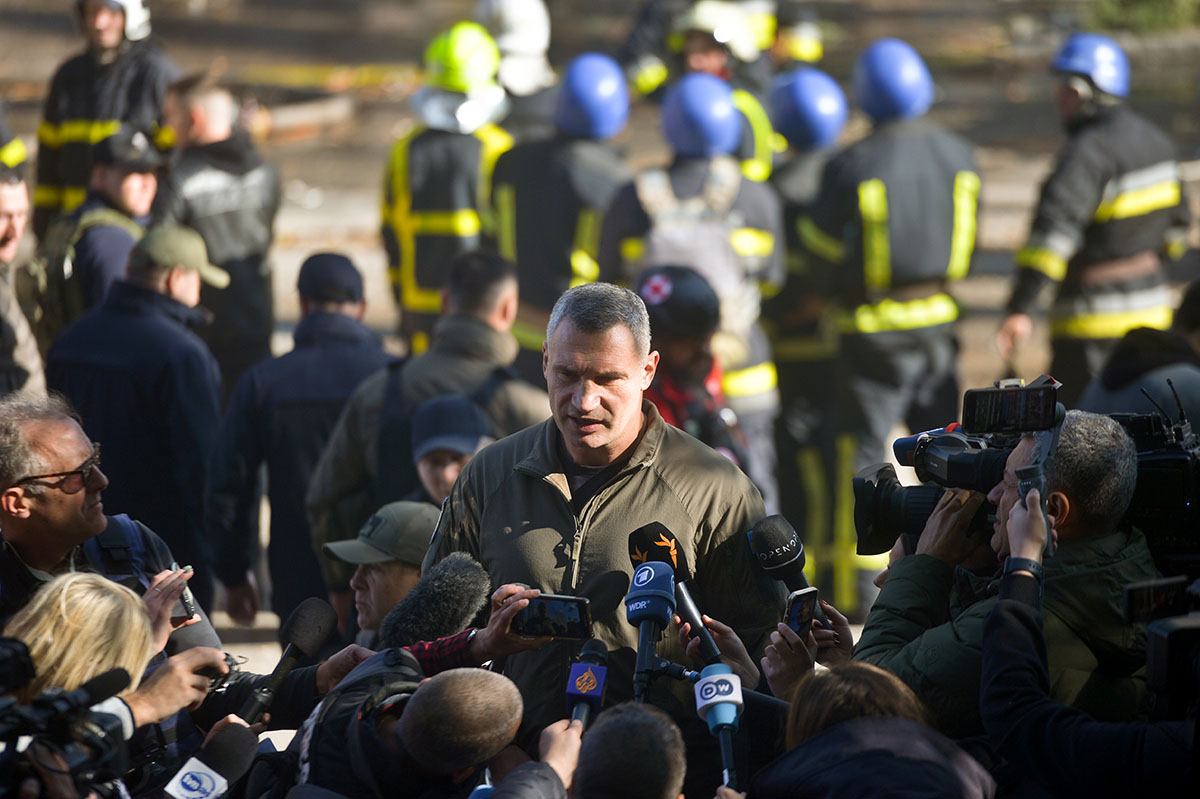 Vitali Klitschko speaks to journalists at the site of a Russian drone strike in Kyiv in October 2022. (Photo by Yevhen Kotenko / Ukrinform/Future Publishing via Getty Images)

They, and other Ukrainian boxers who aspire to someday achieve the professional success of the aforementioned national sports heroes, did not hesitate to leave the fight game with which they are so familiar to join a struggle that meant so much more to them than purses and the retention or gaining of a bejeweled title belt. It has been reported that Ukrainian boxers from gyms around the world express their support for their country by shouting “Slava Ukraini,” or “Glory to Ukraine” whenever their workouts conclude.

Asked by a reporter from a different nation why he had broken off training in the United Kingdom for his rematch in Saudi Arabia with the man from whom he had won his alphabet titles, England’s Anthony Joshua, Usyk reacted with righteous indignation.

“What do you mean, why?” Usyk replied. “It is my duty to fight to defend my home, my family.” 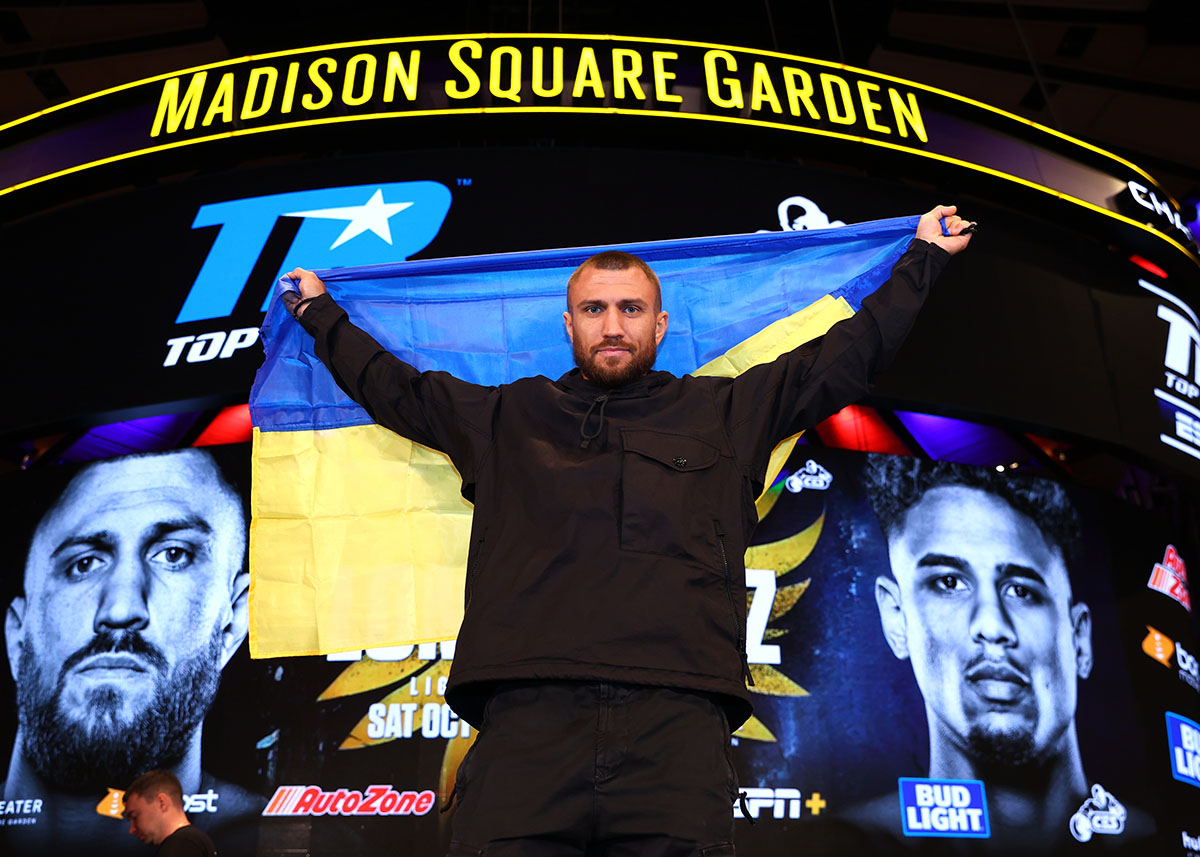 Vasiliy Lomachenko was never without the Ukrainian colors during his fight with Jamaine Ortiz. (Photo by Mikey Williams/Top Rank Inc via Getty Images)

Although Usyk left England to enlist in Kyiv’s territorial defense unit and spent months carrying a rifle on street patrols or finding places to hunker down in bomb shelters during the Russians’ incessant shellings, he was urged by Ukrainian President Volodymyr Zelenskyy to get back to his day job, and his repeat points conquest of Joshua likely did more for the morale of his countrymen and women than if he had become another casualty of an increasingly bloody war.

“It was important for my country, for my team and personally for me,” Usyk said after he added a second straight victory over the much larger Joshua on August 20. “I fought for my whole country and half the world. I devote this victory to my country, to my family, to my team, to all the military defending my country. Thank you very, very much.”

President Zelenskyy confirmed the emotional ramifications of Usyk’s retention of the heavyweight crown for a populace in need of something or someone worthy of being cheered.

Usyk’s second defeat of Joshua was, Zelenskyy tweeted, an “important and necessary victory. Defending the title of the world champion is a symbol of the fact that all Cossacks will not give up theirs, will fight for it and will definitely win.”

Not that the circumstances are exactly the same, but Ukraine’s determined resistance to a naked act of aggression calls to mind the hundreds of thousands of Americans who signed up for military service in the immediate aftermath of Japan’s surprise attack on Pearl Harbor on December 7, 1941, leading to the United States entering World War II in both the Pacific and European theaters. Such legendary athletes as Ted Williams and Yogi Berra were in the thick of the fighting, but other superstars, most notably heavyweight champion Joe Louis and Yankees centerfielder Joe DiMaggio, both of whom had sought assignment to combat zones, were kept away from the heaviest fighting so that they could serve as uplifting presences to the troops they visited who would soon go into battle. 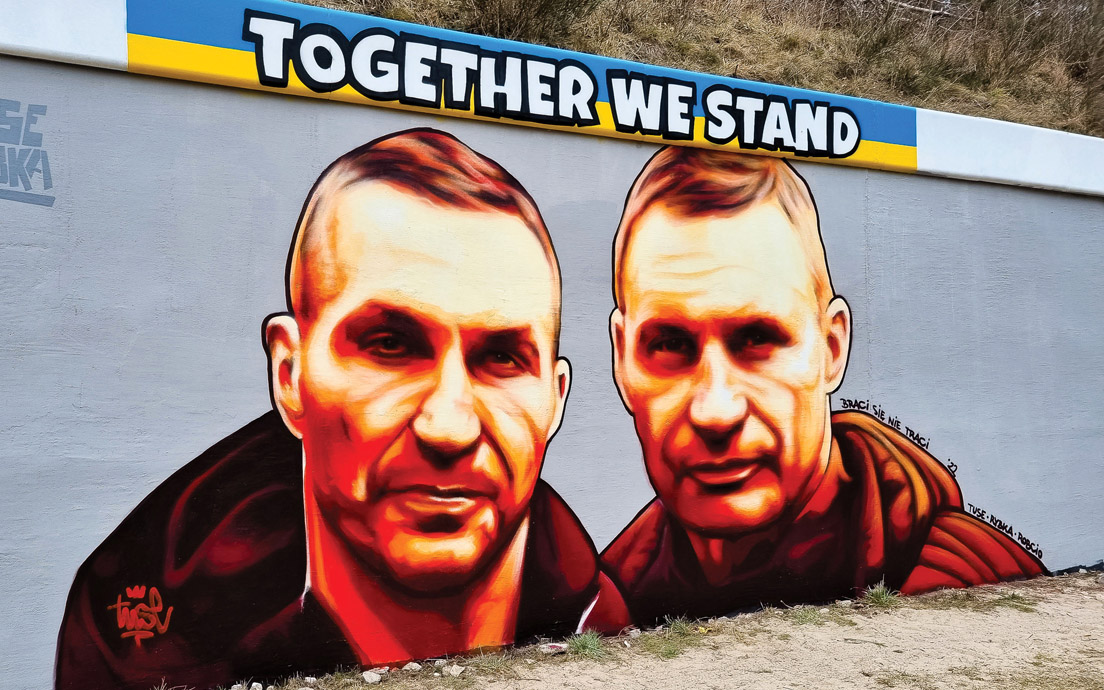 Lomachenko, like Usyk, did not hesitate to put his body on the line, and during his time in uniform he explained that, even more so than in boxing, moment-by-moment living is “very scary because your life could end just like that. Every time we saw a vehicle or an individual … you start imagining things about that individual or car, thinking it might be an enemy.”

But, as was the case with Usyk and Lomachenko, Ukraine’s boxing idols served a higher purpose by continuing to serve as living, breathing inspirational figures whose victories in the ring were not theirs alone, but served as sources of hope and pride for their country.

Ukrainian sports reporter Igor Nitsar described the returning boxers as fighters of a different sort thusly to CNN in March: “It’s really inspiring to see such famous people ready to protect our homeland with weapons in their hands. They had many chances to flee the country, but they stayed. I think it’s pure courage.”