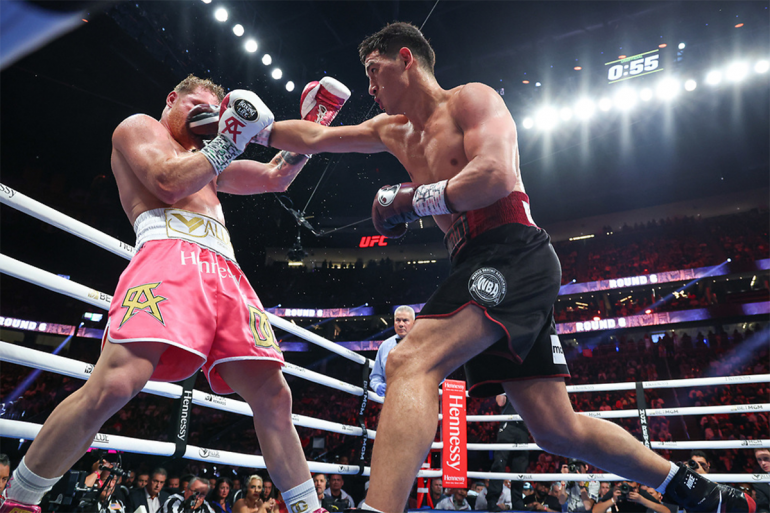 Photo above by Ed Mulholland/Matchroom

Earlier in his career, Dmitry Bivol was heavily marketed by HBO Boxing as an emerging star. With dominant performances over Sullivan Barrera, Isaac Chilemba and Jean Pascal, Bivol was viewed by many as the heir apparent in the light heavyweight division. But in boxing, narratives can change quickly. In March of 2019, Bivol was cracked late in his fight against Joe Smith. Although Bivol won that bout wide on the cards, he took almost a round to recover from being hurt, a potentially concerning sign. Furthermore, from 2019 to 2021, Bivol was out of the ring for almost 17 months, and when he returned, he won a closer-than-expected decision over the unheralded Craig Richards. Bivol’s performance didn’t match his past quality. He lacked the sharpness and gas tank to match his earlier efforts. 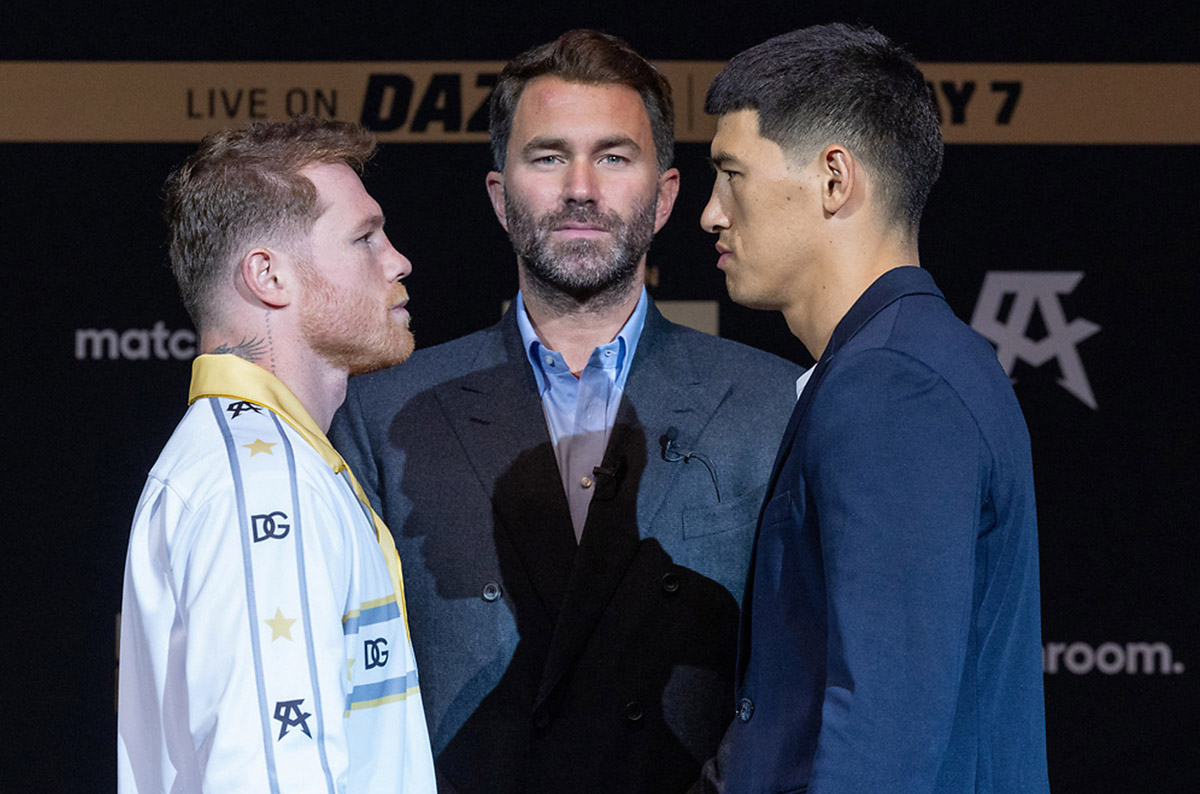 Even with his height advantage, not many people favored Bivol to win. (Photo by Ed Mulholland/Matchroom)

When a fight was announced for Bivol to defend his title against Saul “Canelo” Alvarez in May, there were many who doubted whether Bivol still possessed the elite skills and physicality needed to succeed at the highest level of the sport. And although Canelo would be moving up from super middleweight for the fight, he had knocked out light heavyweight titleholder Sergey Kovalev in November 2019 and had just completed a dominating run at super middleweight to become undisputed champion of the 168-pound weight class. All of this preamble is important because in boxing, context is everything. Bivol entered the fight with Alvarez as the significant underdog, and perhaps deservedly so, based on recent performances.

However, boxing is played out as a contest between two specific fighters in the ring on a given night, not on paper and not necessarily as a continuation of what has transpired in the past. And on this night in May, Bivol left no doubt about his supremacy over Canelo. In a genuine star-making performance, Bivol comprehensively outboxed his opponent, winning the fight at every range and neutralizing Canelo’s offensive output.

Even those who favored Canelo in the matchup conceded that Bivol’s speed and reflexes might give Alvarez problems in the early rounds, and that proved to be the case. Bivol used range expertly at the outset in the fight, taking away Canelo’s jab and his ability to land combinations. On offense, Bivol led with jabs and quick two-punch combinations. In addition, Bivol countered Alvarez with incisive left hooks and jabs. Canelo’s punch output in the early rounds was a trickle, and while that may not have been surprising, he wasn’t able to get much work done. 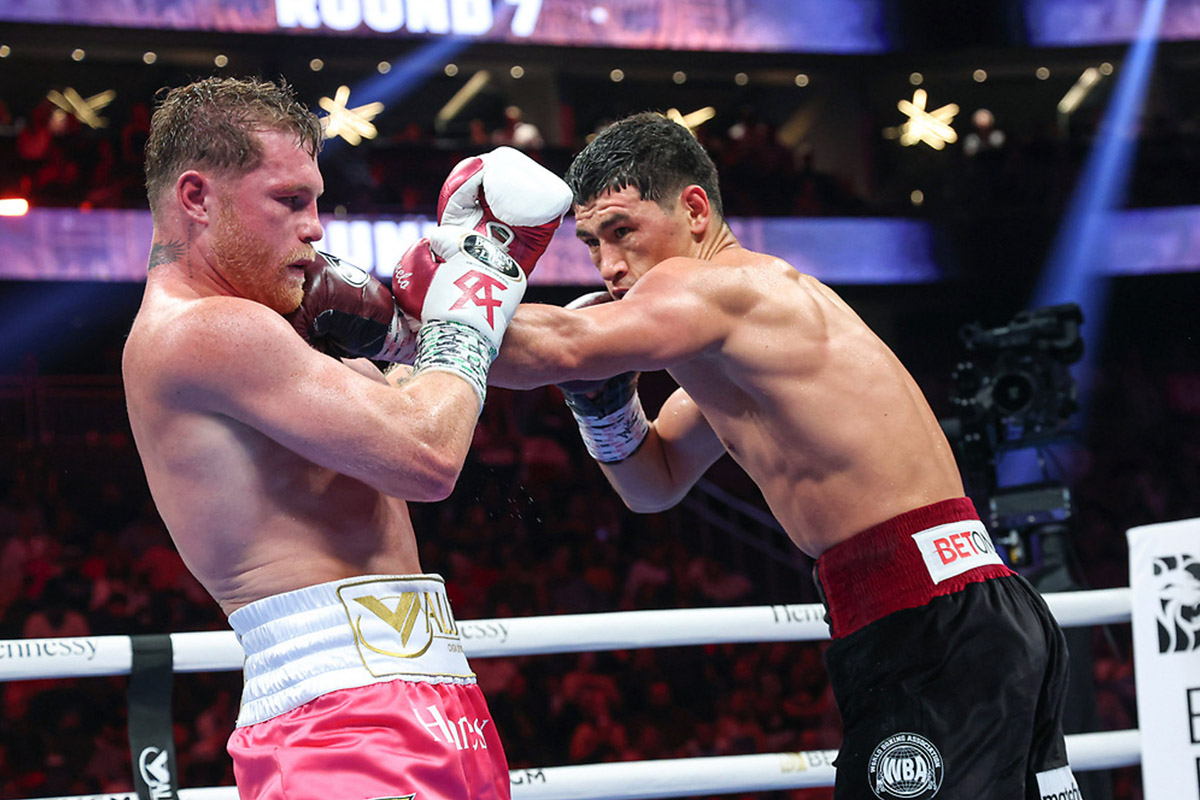 Bivol proved to be more than capable of handling Canelo. (Photo by Ed Mulholland/Matchroom)

Bivol faced his first real test of the fight at the end of the fourth round when Alvarez landed a pulverizing right uppercut with Bivol against the ropes. To the surprise of many, Bivol took the shot without any issues, and after that moment the calculus of the fight changed, because if Canelo couldn’t hurt Bivol, then his path to winning the fight would diminish; he certainly was having trouble banking rounds.

Bivol’s dominance in the center of the ring was the prevailing theme throughout the fight, but his performance included far more facets than that. Alvarez shifted tactics in the middle rounds, going to the ropes in hopes of picking Bivol off coming in to engage. But Bivol routinely bested Alvarez at that range too, beating him with volume and punch placement yet refusing to get dragged into a war. 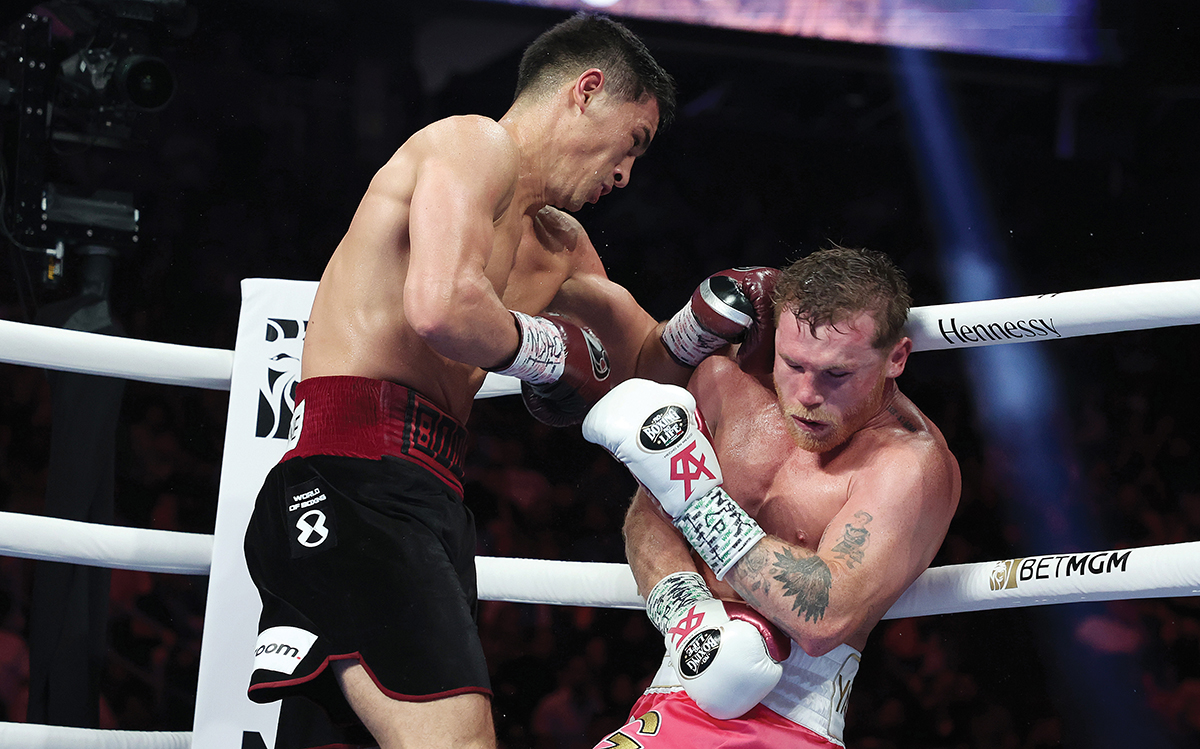 Canelo tried baiting Bivol into the ropes, but Bivol took control there as well. (Photo by Al Bello/Getty Images)

As the fight progressed into the final third of the fight, Bivol demonstrated further wrinkles in his game. Although he dominated Alvarez when he was boxing on the back foot, he also found opportunistic moments to charge forward with quick combinations, and Canelo couldn’t match his hand speed or counter effectively. Bivol could do seemingly whatever he wanted in the ring, and he made one of the best fighters in the sport look plodding and predictable.

Canelo did start the final round aggressively, using a rare two-handed attack. He landed a ferocious left hook in the opening moments and scored with a number of power punches. But ultimately, the story played out the same. Canelo was left hoping that one of his big shots could end the fight, but he didn’t land enough of them or put them together effectively to trouble Bivol in a meaningful way.

Bivol wound up winning the fight by closer-than-expected margins of 115-113 on all three judges’ cards, but I think everyone who watched the fight believed that the scores should have been far wider and that Canelo received some overly generous support from the officials. Nine rounds to three in favor of Bivol seemed to be closer to reality. And while Bivol did take a couple of hellacious power punches during the fight (enough to give Alvarez a few rounds), his expert boxing was more than enough to carry the day.

Later in 2022, Bivol turned in another masterful performance in dismantling undefeated former super middleweight champion Gilberto Ramirez. Overall, Bivol demonstrated in his two fights in 2022 that he is one of the top fighters in the sport. But as comprehensive as his victory over Ramirez was, it was his dominance over Canelo that changed his status in the sport. Handing Canelo the second loss of his illustrious career, Bivol put down a marker. Canelo might have had the big name, the popularity with judges and the flashy power shots, but they wouldn’t be enough. Not for Bivol.

Adam Abramowitz is the founder and head writer for Saturday Night Boxing and a member of the Ring Ratings Panel and the Transnational Boxing Rankings Board. He can be contacted at [email protected]com.