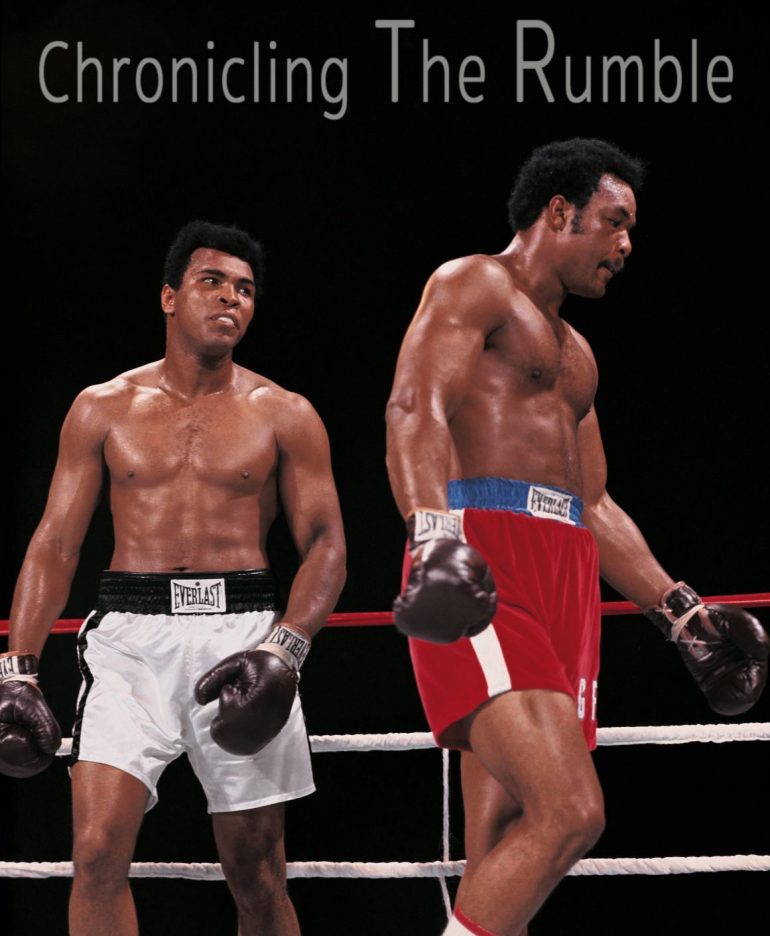 Neil Leifer was – and still is – a Muhammad Ali fan.

Yet the legendary photographer admits that rooting for “The Greatest” almost cost him when he was ringside shooting “The Fight of the Century” between Ali and Joe Frazier on March 8, 1971.

“As much as I adored Joe Frazier, I didn’t think there was any way Joe Frazier was gonna win that first fight in Madison Square Garden,” Leifer admits. “And I was ringside; I was on the apron, and I was so convinced that Ali was gonna win that whenever Joe would throw a punch, even if it was a really good punch, I wouldn’t shoot. I would shoot Ali. So I’m guessing I got to around Round 10, maybe Round 11, and I was in Frazier’s corner, I could hear Yank Durham and Eddie Futch talking to him – and I realized they think he’s winning the fight. Maybe he is, but I had a great set of pictures of Ali beating Joe Frazier. But no editor is looking for a picture of Ali landing a Sunday punch; they’re looking for the left hook.”

Leifer laughs, and he can do that now, but at Madison Square Garden, it was no laughing matter when Frazier landed the left hook heard ’round the world in the 15th round, sending Ali to the canvas. 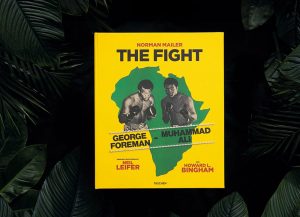 “Of course, I was in the wrong seat that night, and when he knocked him down in the 15th round, he had his back to me. So I couldn’t see Frazier’s face at all, and the referee sort of walked in and obliterated half my frame. I still got a picture that the magazine ran, but I wasn’t in a lucky seat. I had a very good night, I had good pictures, and then bingo – the 15th round comes and it happened in the wrong place in the ring for me. I had no chance to get a good picture, and the 14 rounds before that don’t mean anything. Every editor in the world is looking for Ali on the canvas and Frazier glaring down at him, and I didn’t have that.”

It’s the curse of the photographer. Writers have a delete button on their keyboards and some time – even on deadline – to gather their thoughts before filing a story. A photographer has to get it, and get it right, immediately. There are no do-overs, no delete button, no replays. That’s pressure. And if you think Frazier knocking Ali down is the only shot Leifer has missed, it isn’t.

“Today, you put in a digital 128 gig card, you’ve got 2,000 frames,” Leifer explains. “Even if you’re shooting five, 10 frames a second, you’d have plenty of pictures to take. In those days, you have 36 pictures in a roll. And yes, I had an assistant reloading a second camera so as soon as I finished, I could hand the assistant the camera just behind me and I would switch to a new camera that was full. But it’s very easy to be on frame 35 when the knockout happens, and then you’ve got nothing.” 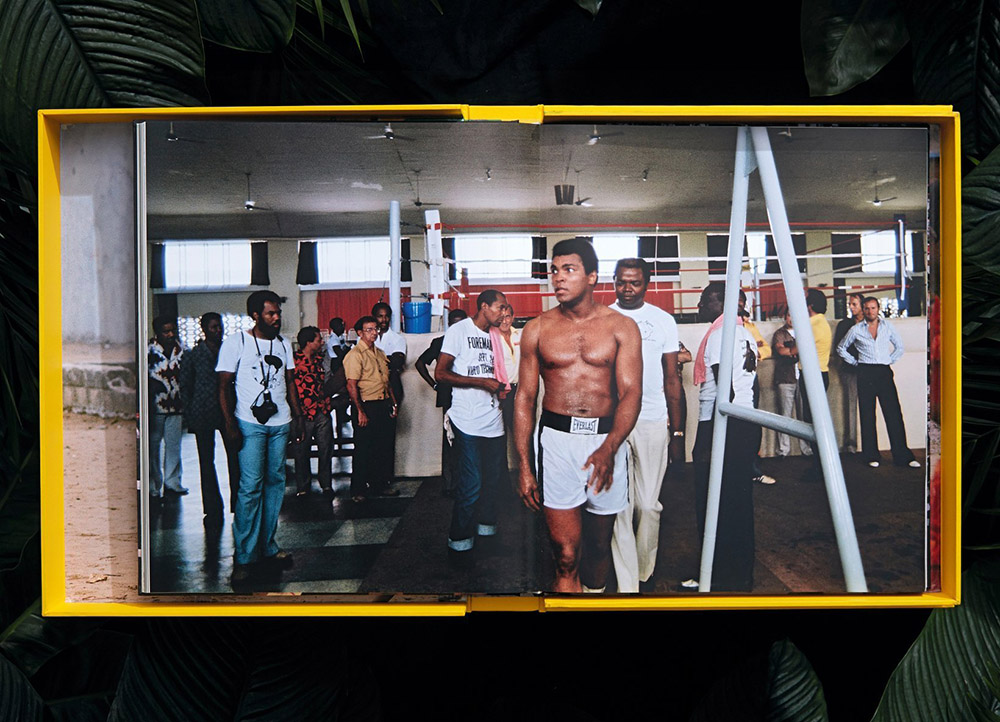 So how did he get around all these things seemingly conspiring against him? Fast forward three years to 1974, and “The Rumble in the Jungle” between Ali and George Foreman, a fight featured in the Taschen book The Fight, which contains photos by Leifer and Howard Bingham and text by Norman Mailer. Leifer was as much of a fan of Ali as he ever was and he wanted to see him shock the world again by regaining the heavyweight title in Zaire, but when it came to fight night, he was going with his gut. He didn’t even pick Ali to win in an informal poll taken on site.

“I’m a huge Ali fan and I was certainly rooting for Ali,” he said. “They did a thing in the book where there was a poll taken of all the journalists that came over for the fight, and they printed both pages of it. And I was rooting for Ali big time, but I picked Foreman by knockout in the fourth round.”

That wasn’t a surprise, and legend has it that seemingly everyone was picking “Big George” to leave Kinshasa with his title intact while many feared for Ali’s safety against the intimidating puncher. But if you look at this poll in The Fight, Ali was favored 13-11. An Ali win would have been music to the ears of Leifer, but he didn’t see it happening. 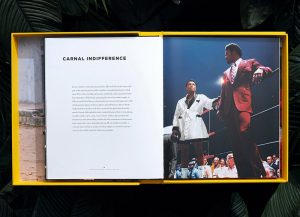 “I photographed Foreman in the Olympics; I was at the (Ken) Norton fight when he just creamed Norton; I was in Kingston when he beat Frazier; and I just thought with Ali, enough time had passed. I thought Foreman was younger, and I picked him in the fourth round because I thought Foreman was one of those fighters that when he gets his punch in, he’s gonna knock you down, you get up and he knocks you down again. Foreman didn’t have a lot more going for him, even against Frazier, other than the fact that Joe was a fighter who sat right in front of you. If you or I got in the ring with Joe Frazier, we’d have no trouble hitting him. The problem is taking what he was dishing out. And the thing that George Foreman had better than anyone that was fighting at the time was he could punch, and when he hit you, that was the end of the fight.”

Then came fight night, and while the photos and text in The Fight take you to Zaire, it’s the photos of the actual bout that put you in the ring like never before. With each passing round, heeding the lessons of Frazier-Ali, Leifer stayed neutral, but he also saw what was happening.

“If you told me that Ali was gonna lay on the ropes for those rounds, I would have said he’s gonna get killed,” he said. “But he (Foreman) never landed a clean blow on Ali. Ali had his arms up in front of his face, and he just kept hitting them.”

In the eighth round, Ali knocked Foreman out. It was one of the most memorable fights – and finishes – of all time, and Leifer captured it all, staying cool in the midst of what he says is the hardest part of shooting sports – especially boxing. 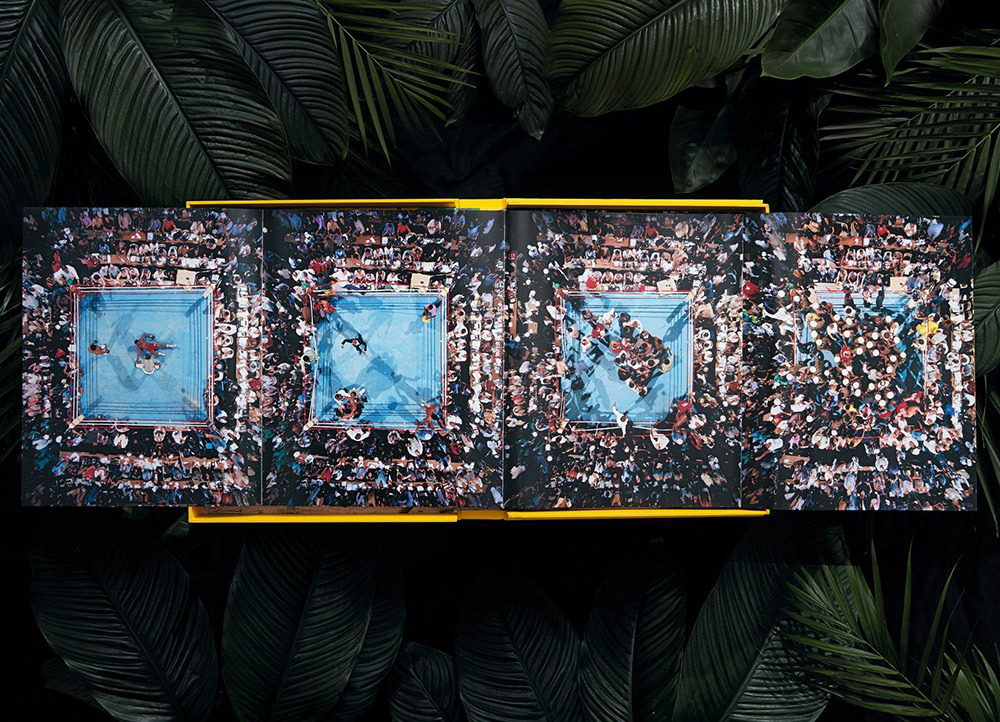 “The writer does have the ability after the fight ends to realize what happened and write the story so it fits the event that just unfolded in front of you,” he said. “The photographer has to do it at the moment. You can’t replay the second or third or fourth round when you get to six or seven. I think the hardest part about shooting, whether it’s a football game or a baseball game or even more important at a fight, is that you have to remain neutral. That’s very hard to do when you’re a fan. I’m a fan. I rooted for Ali.  But it’s like horseracing. You don’t isolate the favorite and then you suddenly discover the favorite comes in second and you don’t have the winner. Same thing with boxing. You don’t sit there and decide I’m only gonna shoot when Foreman punches because I think he’s gonna knock Ali out. You shoot every single punch that you think you can get and hopefully you’re in the lucky seat when the punch that matters comes.”

Leifer may disagree, but there’s nothing lucky about what he does.

“I have never met a modest photographer, so don’t misunderstand the word ‘luck,’ but you have to be very lucky,” he laughs. Again, I’ll disagree, and all it takes is one look at Leifer’s work to see that if there was a Mount Rushmore for sports photographers, he would be on it. The same goes for boxing and the man he covered that night in 1974, and for those of us who showed up after Ali retired, we’re all a little jealous that we didn’t get to cover him the way Leifer and his peers did.

“This was this rare guy,” he said of Ali. “You didn’t have to be Howard Cosell or Dick Young or Red Smith or Neil Leifer. You could be from a high school newspaper, and Muhammad never said no to anybody. You went to the 5th Street Gym when he was training and you waited for him to finish, you went over and said, ‘Mr. Ali, can I get five minutes with you?’ And if he said ‘No, I gotta run now, but come back tomorrow,’ you got it. He never said no to anybody. And with me, he always had the same line: ‘All right, Neil, how much time do you need now?’ And I’d tell him I want 20 minutes. And he’d say, ‘You took advantage of me last time – you got 10 minutes.’ And an hour later, he’d be suggesting poses. (laughs) The access to Ali was like nobody else.” 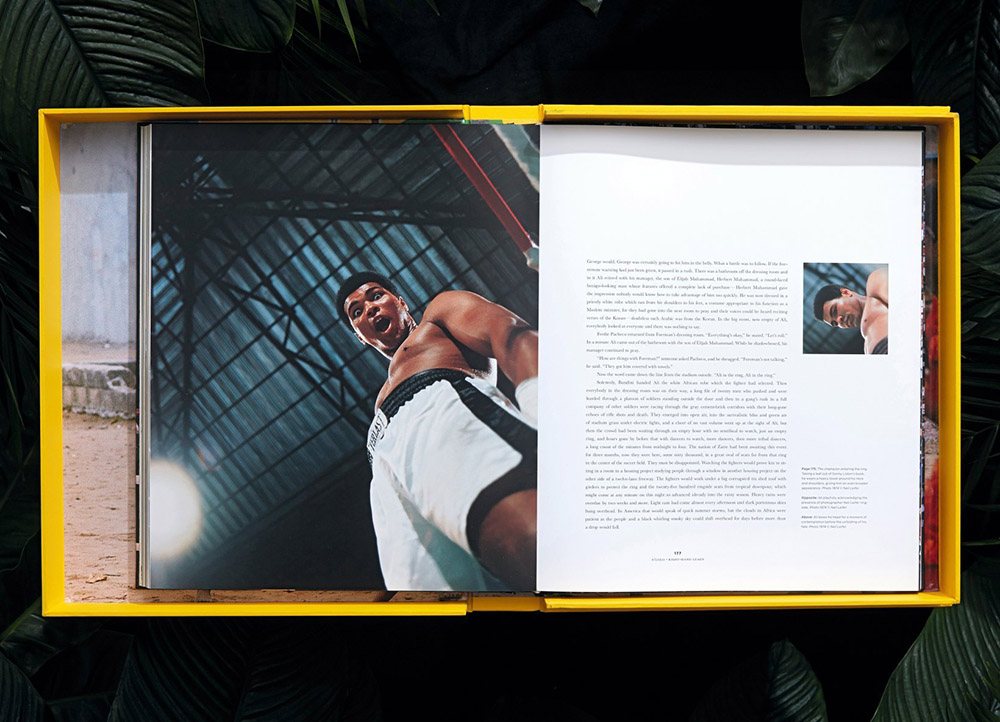 Luckily for us, Leifer was there to document moments like that for us. And he’s still doing it.

“You got the best seat in the house. The challenge is fun. I like taking pictures, and I like boxing,” he said, humbler than anyone with his body of work has the right to be. But Leifer is still as competitive to get the big shot as any of the athletes he covers.

“You want to win every time.”

For more information on The Fight, visit taschen.com.