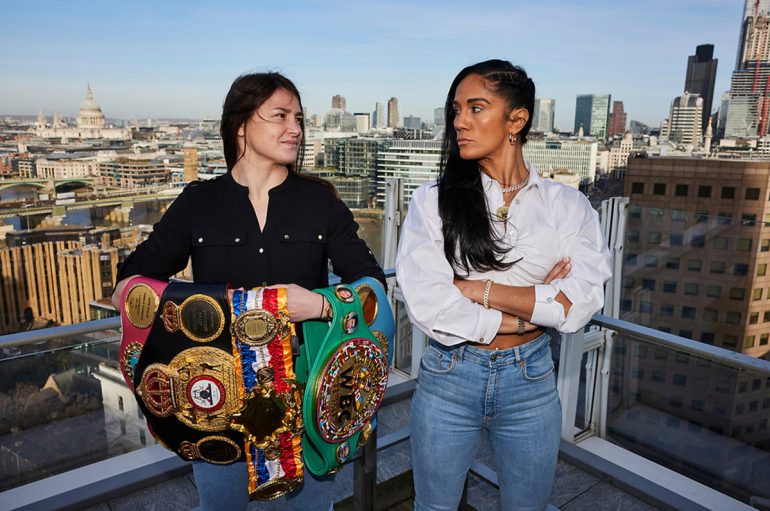 Photo above by Mark Robinson/Matchroom Boxing

The sound emanating from the rabid sellout crowd of 19,187 in the fabled Madison Square Garden was so deafening that at times people inches away from each other could not have a conversation. That’s how big the excitement was around the historic Katie Taylor-Amanda Serrano fight on April 30.

Taylor, the undisputed lightweight champion, won a 10-round split decision over Serrano that night, retaining her Ring, WBC, WBO, IBF and WBA titles. In truth, though, women’s boxing was the real winner. 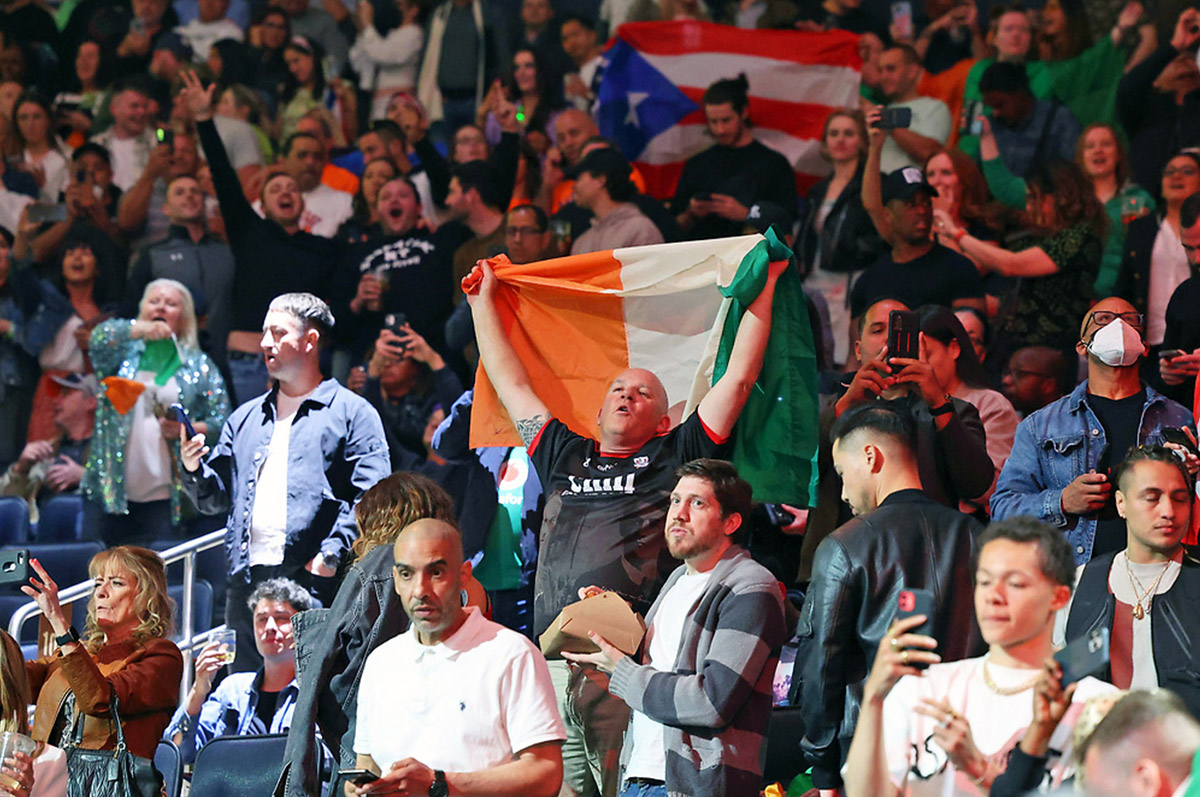 Both sides were well-represented by the fans who flocked to Madison Square Garden. (Photo by Ed Mulholland/Matchroom)

It’s a fight that hauled in $1,450,180.60 in ticket sales and set a new women’s boxing viewership record, pulling in an unparalleled audience of 1.5 million globally on DAZN. What was also unique is that the event outdueled its male counterpart taking place the same night: the Shakur Stevenson-Oscar Valdez battle for the WBC junior lightweight title and the vacant Ring championship at the MGM Grand Arena in Las Vegas, which drew a live crowd of 10,102.

Perhaps above all else is that Taylor-Serrano backed up what was advertised – the best female matchup on paper delivered an amazing fight. It’s been universally accepted as the 2022 female Fight of the Year, but it was also so much more. The attention beforehand erased lines rarely crossed. There were no gimmicks. It was just two elite fighters, whether male or female, that the world wanted to see, and they did not disappoint.

Even Matchroom head Eddie Hearn was stunned by how far the fight surpassed his usual ballyhoo.

“We just saw one of the best fights in boxing history at the mecca of boxing,” Hearn said afterward. “Unbelievable. What a performance. What heart from both girls. Just the most stunning fight I’ve seen. To see it here at MSG, in this kind of environment … amazing. 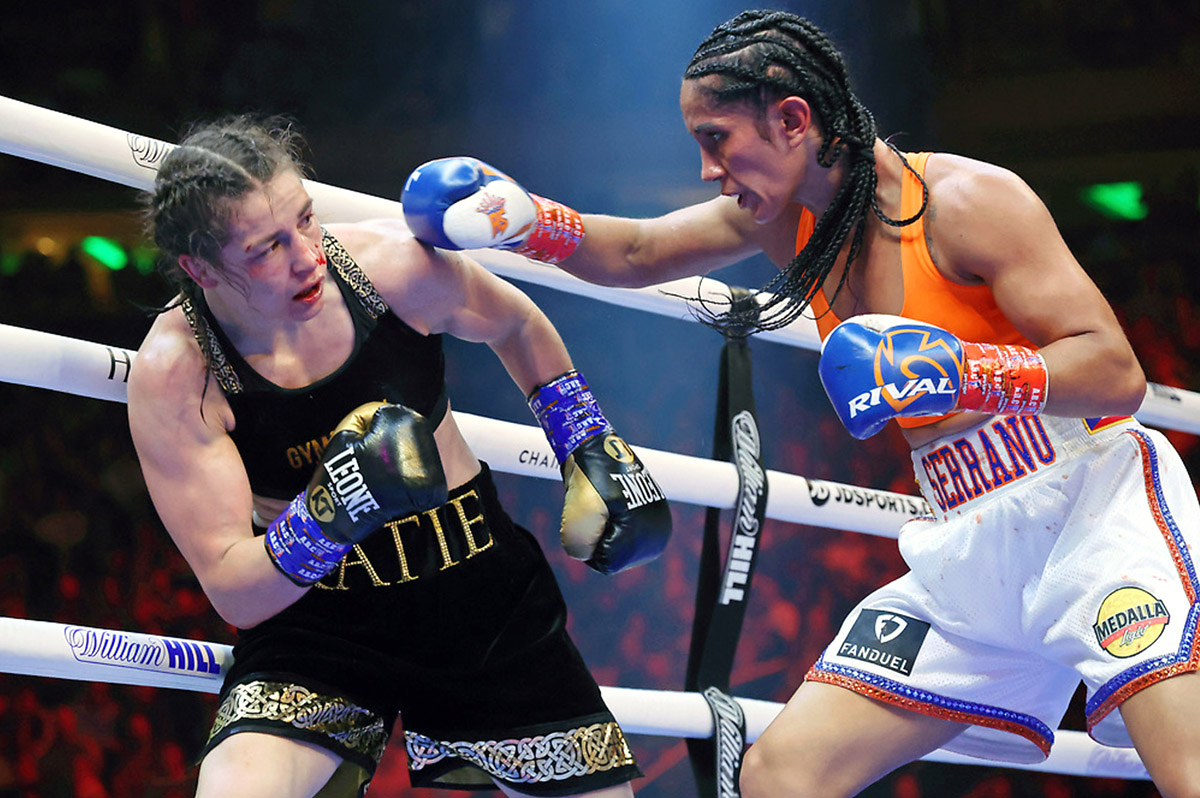 Serrano was always in forward gear. (Photo by Ed Mulholland/Matchroom)

“Katie Taylor is one of the biggest legends in Irish sport. Both women deserve so much credit. I think now, tonight is the night we stop talking about women’s and men’s boxing and we talk about just boxing, because that was one of the best fights I ever witnessed live.”

Fueling the drama was how constant and fiercely contested the action was. It was anything but a blowout.

“It was a close fight,” said Hearn. “I thought [Taylor] won it by a round or two, or maybe a draw, but I didn’t feel like Serrano won the fight. But I could see the draw. I was so pleased to see her win, but we have to run that back, because it was so good.” 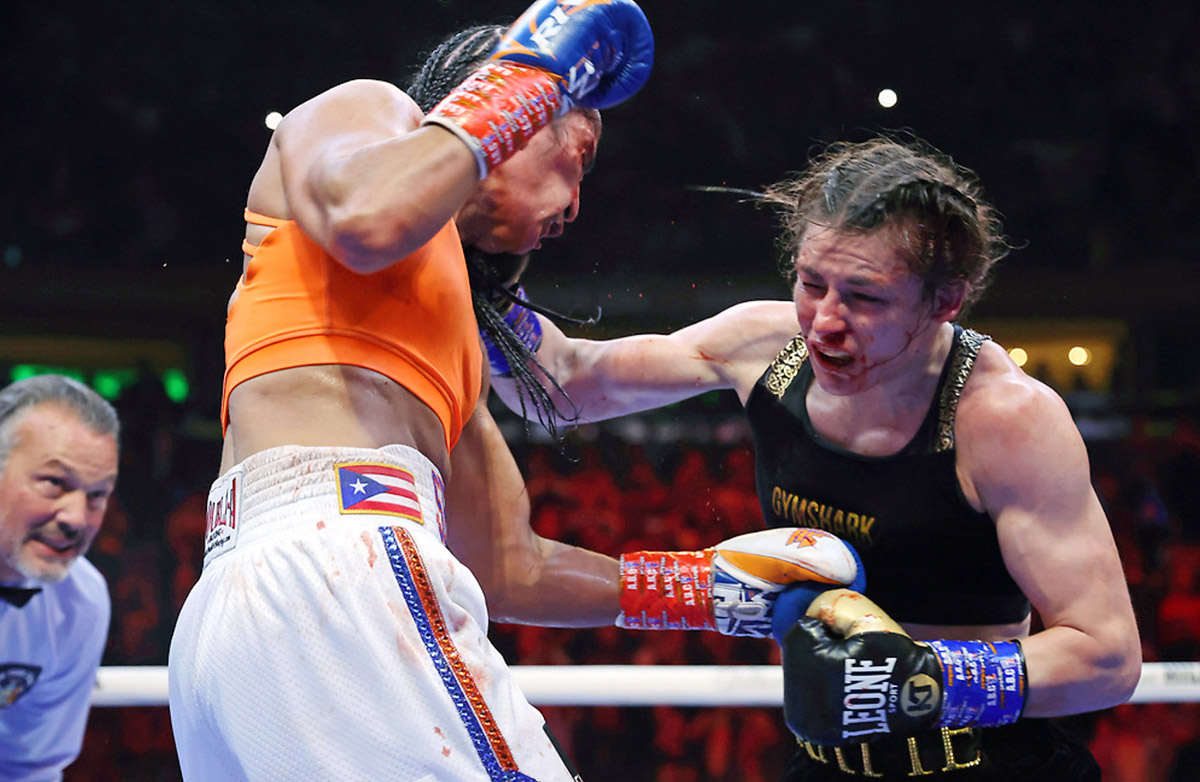 The momentum switched throughout the fight, but the intensity of both fighters never wavered. (Photo by Ed Mulholland/Matchroom)

No one was arguing that. The split decision in favor of Taylor (22-0, 6 knockouts) was almost irrelevant.

After six, Taylor was down 57-56 on judge Guido Cavalleri’s scorecard, 59-55 on Benoit Roussel’s sheet, while Glenn Feldman had it even at 57-57, with eight minutes to fix it.

The Serrano strategy was working wonderfully, luring Taylor into the pocket and forcing her into a street fight. 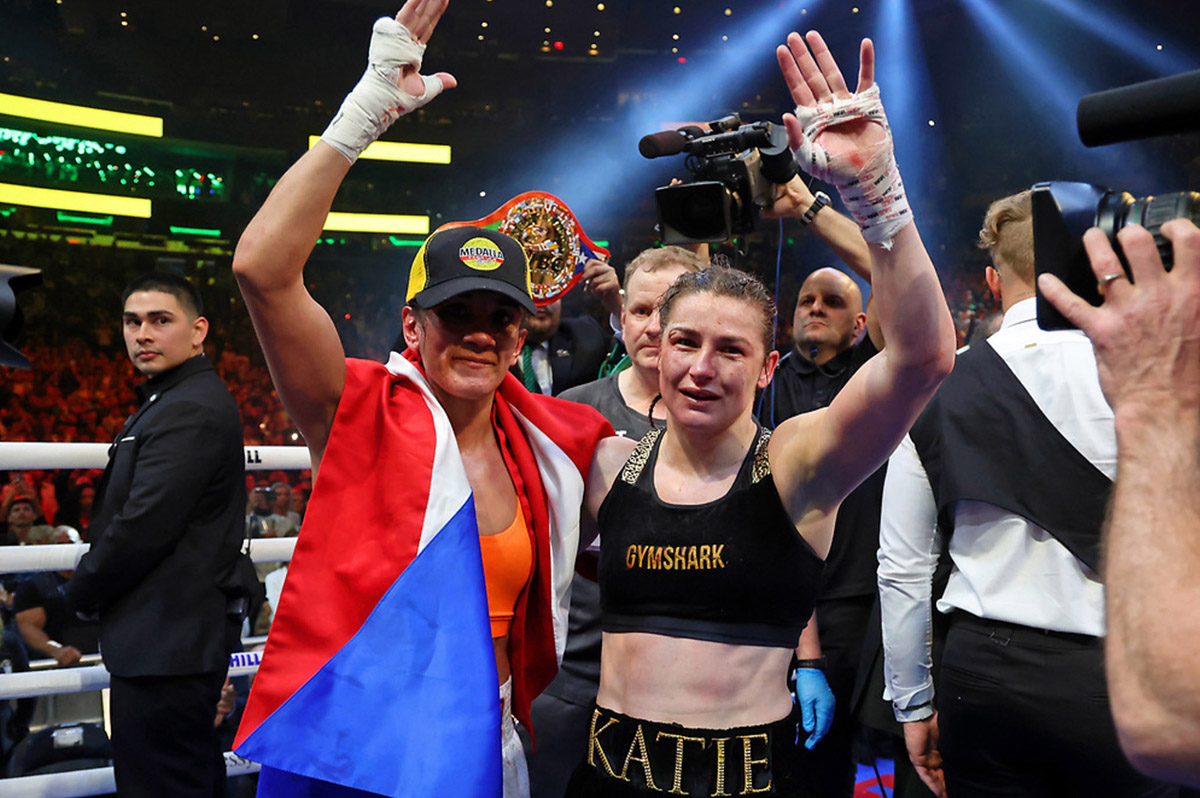 “That really was [the plan],” said Serrano. “She kind of folds under pressure, and that’s what we were trying to do. I wanted her to feel my power.”

Taylor found a higher gear and won three of the last four rounds on Roussel’s card and all of them in the eyes of Cavalleri and Feldman.

The two fighters never got out of each other’s way. Serrano, the southpaw, was always coming forward; Taylor was always there to meet her. The Irishwoman probably endured the single most damaging round of punishment of her career during the fifth. She was even rocked a few times.

“I wasn’t as hurt as people may think,” Taylor said afterward. “I wasn’t worried. I knew [the fifth] was a tough, tough round. I knew that was Amanda’s round. But I knew I was OK; I knew I was stable coming back to the corner. I just had to regroup and reset, and I actually won the next round.”

Serrano (42-2-1, 30 KOs), No. 3 in The Ring’s female pound-for-pound rankings and the No. 1-ranked lightweight behind champion Taylor, was talking about a rematch just minutes after the epic fight had ended.

After everyone regained their hearing, no one objected.