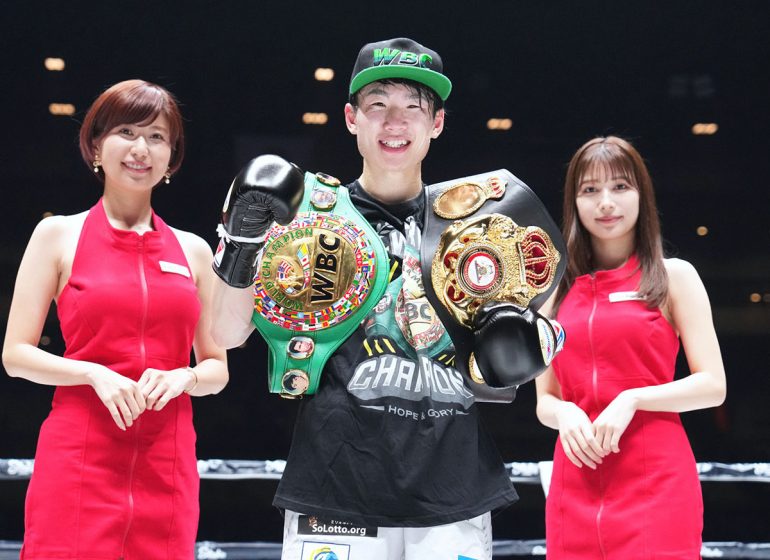 When WBC titleholder Kenshiro Teraji met mandatory challenger Masamichi Yabuki in September 2021, most expected it would amount to little more than a stay-busy fight for the incumbent.

The two had been scheduled to meet on September 10, but after Teraji caught COVID, the fight was postponed. Surprisingly, it was only moved back 12 days. It looked like an unnecessarily quick turnaround, and that proved to be the case.

Teraji struggled to find his usual rhythm from the start. He was a shadow of himself as the fight unfolded and was behind on all three scorecards when the referee stepped in to save him from further punishment in the closing seconds of the 10th round.

Teraji, who had successfully defended his title eight times during a four-year reign, admits that he took being world champion for granted, and admits that the loss had him contemplating a change of profession.

“I had always made up my mind that if I lost, even once, I would quit fighting,” Teraji (20-1, 12 knockouts) told The Ring through Hank Hakoda. “I was seriously thinking about retirement after my unexpected loss. I was looking for what I would do next in my life, including [attending] a school to become a sushi chef.” 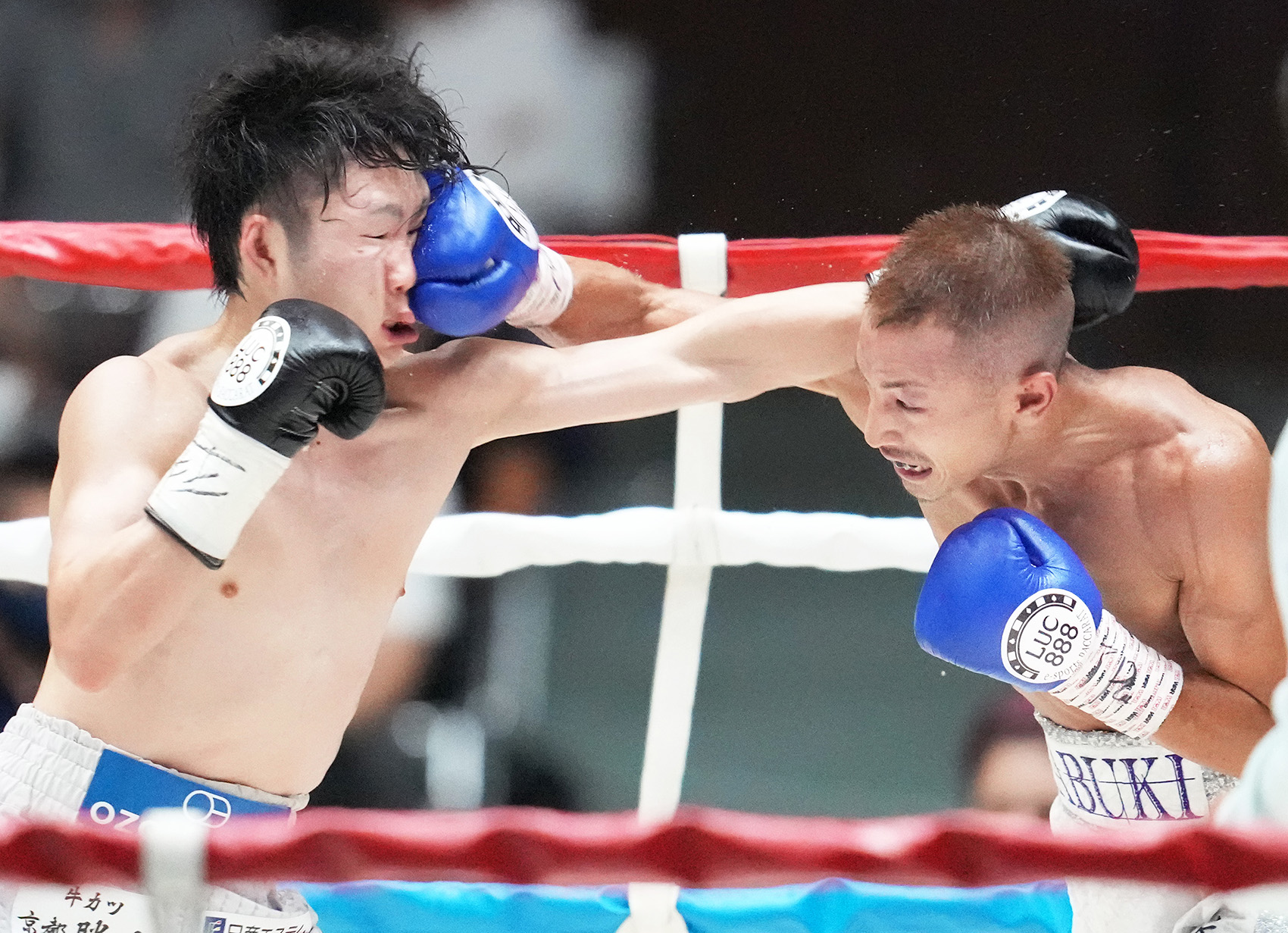 However, after a period of reflection, the proud Teraji doubled down and signed on to face Yabuki again.

“I will come back stronger,” he said confidently ahead of the rematch. “I want everyone to witness. I will become a champion again. I promise you a fight that should make you feel touched with my soul-stirring performance.”

Six months after the first fight, the pressure was on Teraji as he stepped into the ring at the City Gym in Kyoto. He was surely aware that a second consecutive defeat to his countryman would leave his career in tatters.

It was widely expected that Teraji’s game plan would be a return to being the smooth boxer who expertly used his jab to measure distance while employing excellent footwork to get into range and then out without incident. 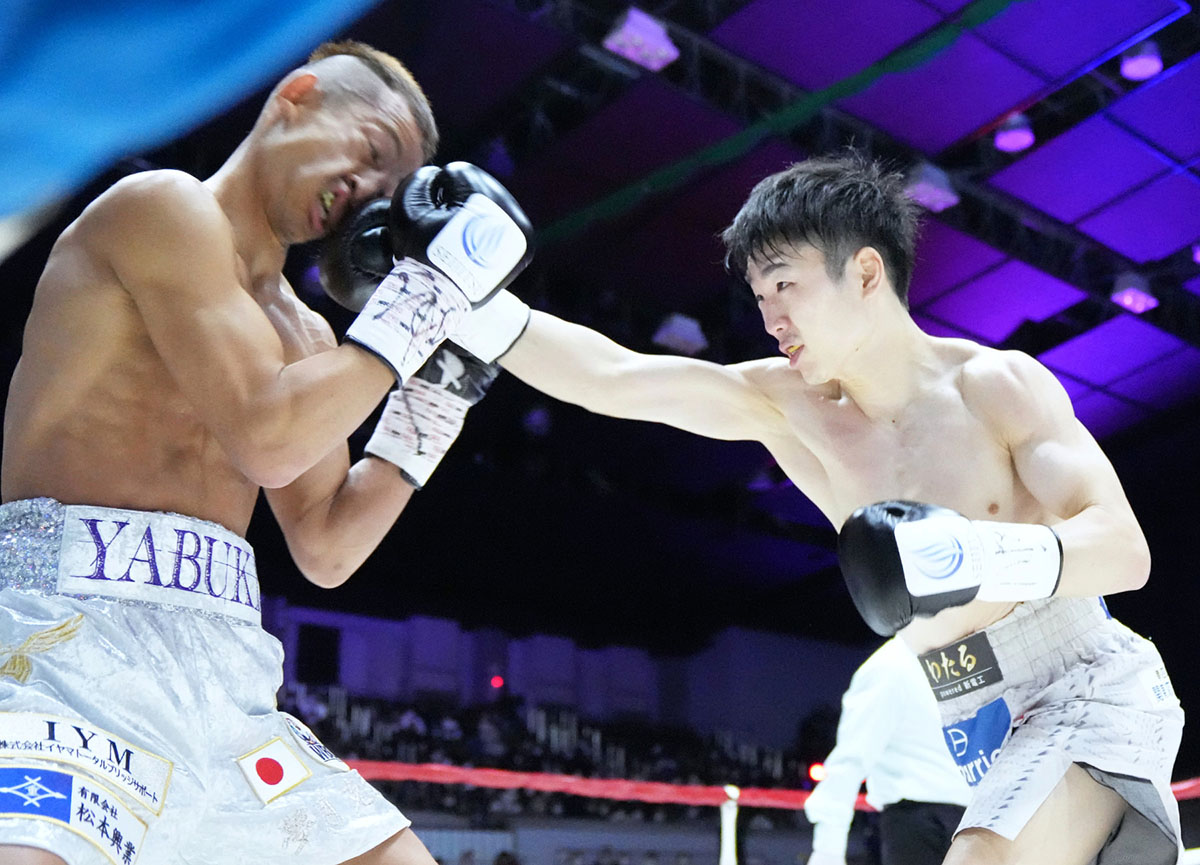 Teraji wasted no time and came out strong in the rematch. (Photo by Naoki Fukuda)

What we saw was a Teraji more driven than ever before. He had the bit between his teeth and didn’t let up from the opening bell.

The 30-year-old veteran showed what a healthy Kenshiro can do by demolishing Yabuki in three rounds, breaking down his nemesis with body shots and flooring him with a long right cross to regain the WBC title.

Teraji’s performance evoked memories of when former heavyweight champion Lennox Lewis rebounded from a knockout loss to Hasim Rahman by beating his former conqueror in even more brutal fashion.

At that point, Teraji could have been forgiven for facing lesser challenges, but instead he sought out former amateur rival Hiroto Kyoguchi, who held the Ring and WBA titles. Thus the stage was set for a huge unification to definitively crown the best junior flyweight in the world.

The counterparts met at the Saitama Arena on November 1. The eagerly anticipated matchup was seen by most as a 50/50 fight; 20 experts polled for a RingTV “Fight Picks” story gave Teraji a slight 11-9 advantage, while Kyoguchi was the bookmakers’ 8/13 (-163) favorite. 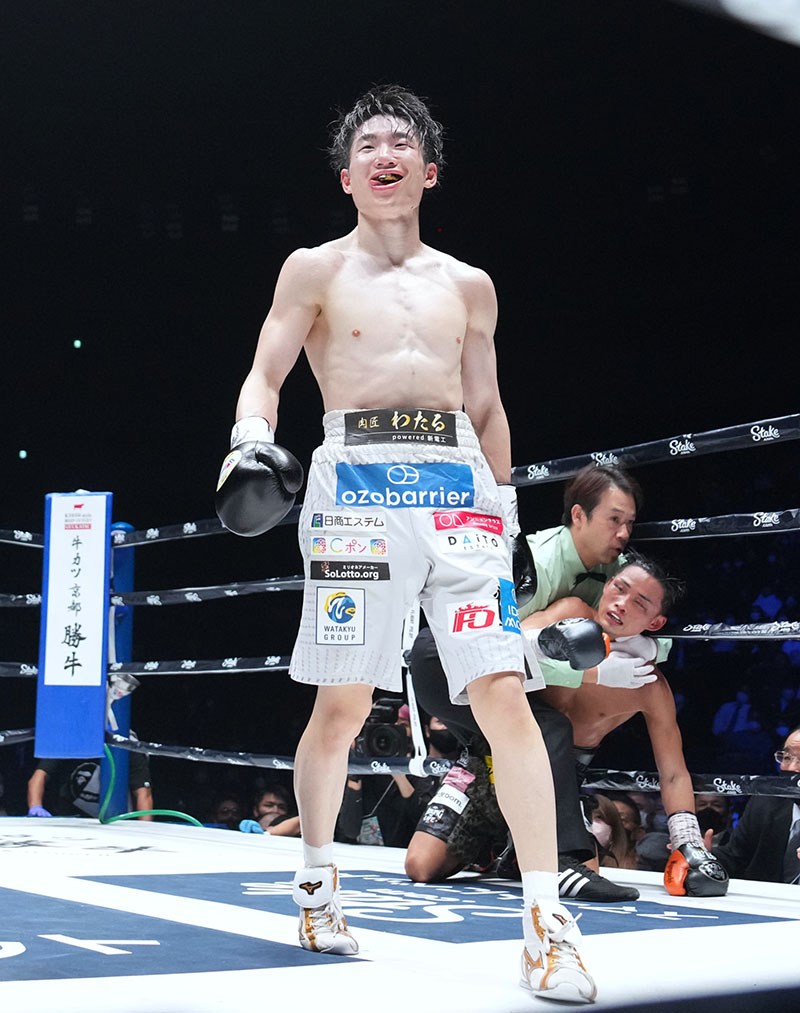 Kyoguchi succumbed in Round 7. (Photo by Naoki Fukuda)

What we saw was anything but close. Teraji dominated the action from Round 1, got more aggressive in the fourth and stunningly dropped Kyoguchi at the start of the fifth. Kyoguchi roared back late in the session to mark it as a contender for the Round of the Year.

It proved to be a final act of defiance from Kyoguchi. Teraji regained his stranglehold on the fight, tenderizing his rival in the sixth before closing the show with a one-two that sent Kyoguchi reeling backward and nearly through the ropes in the seventh round.

“Kenshiro tripped but bounced back and came back better,” said Hernandez. “The discipline, focus, and we can’t forget the desire to be great. He has earned his place in the history books of boxing as one of Japan’s great fighters of this era.”

But with two sanctioning body belts still in others’ hands, Teraji isn’t content with his unified champion status.

“I want to collect all the major four belts,” he said. “I just want to continue on and win the next belt. It would be a perfect scenario if another unification opportunity with the winner comes to me in my next fight.”

To do that, he would have to face Jonathan Gonzalez, the WBO titleholder whose greater experience helped him best Shokichi Iwata on the Kyoguchi-Teraji undercard. Or Teraji could face Sivenathi Nontshinga, who traveled from his home in South Africa to edge past Hector Flores (SD 12) in Mexico to annex the vacant IBF title.

At the recent WBC convention, former Ring champ and unified beltholder Hekkie Budler was named as Teraji’s next mandatory and could be next, if a further unification doesn’t supersede it.

That’s for next year. For now, Kenshiro Teraji has bounced back strongly from a first career defeat to enjoy an excellent year and is The Ring’s 2022 Comeback of the Year.

Our correspondent Hank Hakoda translated quotes for this feature.