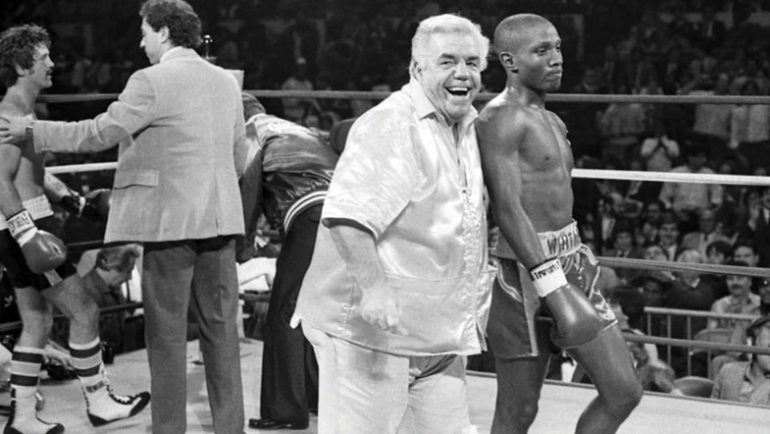 And oh what a face it was.

Duva, who passed away on March 8 in his hometown of Paterson, New Jersey, at the age of 94, trained and managed 19 world champions, but he cajoled and catered to many more and loved them all. Whether they had the talent and the will to become what Evander Holyfield and Pernell Whitaker once were, which is to say among the greatest fighters of their time, or just the grit of Eddie Hopson and Raul Marquez, who became more than their gifts would have predicted, or were just some unknown four-round kid with a dream but little else behind it, Lou Duva loved them equally because he loved nothing more in the world than family and fighters.

To him they were one and the same, which is why they so often sat at his dinner table on a Sunday and why he fought so hard for every one of them, both figuratively and literally. Lou Duva went to his grave knowing who he was. His fighters also knew. To the end, he was a fight guy and a fighter’s friend.

“His life was boxing,” recalled Marquez, who was 15 and still an amateur training at Kenny Weldon’s gym in Houston when he first met Duva. Later, Duva would lead him to a world championship and stay loyal to him come hell or high water. In boxing that’s saying something because there is plenty of both.

“He was real,” Marquez continued. “He wasn’t a bullshitter. If he said he’d do something for you, he’d do it and he didn’t mind if you reminded him of what he’d promised because he delivered.

“His life was boxing, even late in his life. I called him once a month when he was in assisted living in New Jersey. He could only talk for five or 10 minutes because he had trouble breathing but he always wanted to know how my family was doing and if I had any young fighters.

“I was a young kid so he was old to me the first day I met him. Here was this guy getting into fights with referees and telling off young people. I thought, ‘He’s crazy but he’s tough. Nothing’s gonna stop that guy.’ He wanted to help us all.

“Lou knew how to push your buttons when things were going bad. He was one of the most honest people in boxing. I’m not saying that because he’s passed. I’m saying it because it’s the truth. Everybody needs a guy like Lou in their corner.”

Exaggeration was sometimes a necessity because he was in the business of selling tickets, from his early days promoting small shows at Ice World, a hockey rink in Totowa, New Jersey, to his peak as one of the most influential managers in the sport after he and his family joined forces with a former music promoter named Shelly Finkel to form Main Events and signed Holyfield, Whitaker, Mark Breland, Meldrick Taylor, Tyrell Biggs and Virgil Hill from the 1984 U.S. Olympic team.

But in boxing, exaggeration is not dishonesty. It’s business, and few loved the business more than Lou Duva.

“HBO used to have a saying that they were the heart and soul of boxing,” recalled Duva’s longtime friend and fellow trainer, Teddy Atlas. “That really belonged to Lou Duva. From the 1970s on he was one of the faces of boxing and the Duvas were bigger than anyone for a long while.

“All those great fighters they had did business with his son, Dan, who was brilliant. But they signed with Lou. He made those kids believe in him. He had some of the greatest fighters of the 1970s and 1980s, the last era when boxing was truly healthy. He was the face you saw in their corner and it was the kind of face you’d expect to see in a corner.

“It was a rugged, tough face but there was something else behind it: humanity. He was in the trenches with his fighters. When you looked at that face you thought, ‘This is a boxing guy.’”

Duva craved nothing more than that. Unlike so many in the sport whose egos exceed their abilities, Duva willingly admitted his son was the business brains and for many years George Benton was the training brains behind their many champions. Lou’s job was different.

He was the recruiter, the master motivator and, on fight night, the man willing to fight for them. He fought with referees, promoters, commissioners and even opponents. One night he exchanged punches with then-world champion Roger Mayweather after Mayweather had given Duva’s fighter, Vinny Pazienza, a rough time of it. Duva left the ring looking worse than Paz, a gash dripping blood from his cheek.

‘IT WAS A RUGGED, TOUGH FACE BUT THERE WAS SOMETHING ELSE BEHIND IT: HUMANITY.’
– Teddy Atlas

He did it most memorably after heavyweight Andrew Golota was rightfully disqualified for repeated low blows against Riddick Bowe. When the fight was stopped a near-riot broke out as Bowe’s supporters attacked Golota. Lou ended up in the middle of it, throwing punches and insults and defending Golota until he collapsed in the ring with what was feared to be a heart attack.

He was carried out of the ring on a stretcher, the only time people could remember a cornerman going out on his shield. He’d been felled by a shock from a portable cardiac stimulator he wore as a result of a heart attack several years earlier that was set off by the stress of the melee. He’d gotten overwrought, which on fight night was a normal occurrence for Duva.
When his fighters became a staple of HBO Boxing in the 1980s, the network finally had to step in and ask him if he could tone down his language in the corner. His appeals to guys like Holyfield and Taylor often were profane and always pointed.

He agreed, but not totally. He began cursing in Italian instead. That didn’t help the international broadcast but it helped out HBO. Hard to know what it did for the fighters but they understood him in the way a kid understands his sometimes volatile but always loveable uncle.

“It’s important to a fighter to have someone who believes in you when the wolves are at the door and it’s about time to leave the locker room and you’re wondering if you’re good enough,” Atlas said. “In those moments, Lou Duva was right there for his fighters to tell them, ‘Kid, you can be champion of the world. There’s nothing to worry about. I’m here with you.’
“Every fighter needs that but they don’t all get it. Every one of Lou’s fighters had that. Whether he really believed it or not is another matter, but he’d convince the fighter. That was his job and he was better at it than anyone I ever saw.

“A great cornerman can win a fight and Lou was a great cornerman. Angelo Dundee was too. Angelo did it for Ali in the first Liston fight and against Henry Cooper when he was hurt and suddenly his glove was split and they had to take time to find another one. By the time they got it, Ali’s head was clear and he knocked Cooper out.

“Lou did the same thing for Johnny Bumphus. Bumphus was near the back end of his career and he was having a tough night. The fight was on national TV and they were experimenting with open scoring.