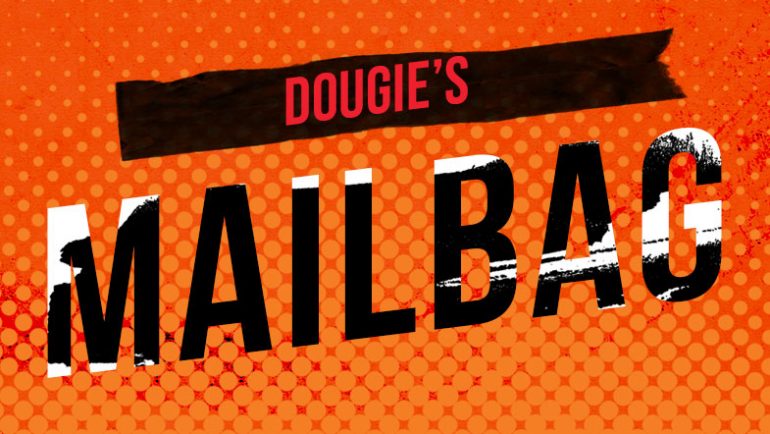 Since 2001, RingTV.com Editor Doug Fischer has held an ongoing dialog – which occasionally becomes heated debate – with boxing fans from around the world in “Dougie’s Mailbag.” The following excerpts are from the March 20 edition of the Monday mailbag.

JUAN, from Tijuana, says Gennady Golovkin deserved to retain his three major middleweight titles against Daniel Jacobs on March 18, figuring the odds/media favorite “did enough to win six or seven rounds” but believes the undefeated KO artist “let go several rounds looking for openings” while trying to keep his knockout streak alive. He gives Jacobs a lot of credit for getting up from a fourth-round knockdown and nearly unseating Golovkin, but thought the middleweight boogeyman could have gone to the body more. GGG’s saving grace in the fight, according to Juan, may have been his rock-solid chin.

DOUGIE’S reply: Golovkin’s chin is arguably the best in the sport. I agree that he was headhunting too much with single power shots against Jacobs, but I’m going to give the Brooklyn-born challenger credit for neutralizing GGG’s aggression to an extent with lateral movement and sporadic offense that kept the defending titleholder on his toes and always ready to take a step back.
Golovkin definitely needed to go to the body more than he did, especially after scoring the only knockdown of the bout in Round 4, but Jacobs fought an excellent fight according to his game plan, and he really dug deep in the late rounds. Jacobs and his team – which obviously had a great training camp – should be proud of the effort he put forth against Golovkin.

TOM, from Pennsylvania, thought Jacobs did a good job of neutralizing and frustrating Golovkin but believes the defending titleholder won the fight clearly, scoring it 115-112 for the Kazakhstani star. He was curious about Fischer’s opinion on both middleweights’ performances and what each does next. Tom also thought Roman Gonzalez clearly beat Srisaket Sor Rungvisai and wonders what Chocolatito will do next in the wake of his razor-thin majority decision loss to the underdog Thai veteran (hoping the Nicaraguan hero goes for a big-money fight against Japanese wunderkind Naoya Inoue before he completely burns out).

DOUGIE’S reply: I’ve read that Gonzalez wants an immediate rematch with Sor Rungvisai and I think he has a right to try to regain the WBC 115-pound title after suffering what most viewed as a controversial decision loss. If Inoue were to suddenly challenge Gonzalez and record money was put up for that fight, maybe that’s a course Chocolatito would take, but I don’t see that happening any time soon.

Like you (and most observers), I thought Gonzalez clearly beat Sor Rungvisai, scoring eight rounds to four in favor of the four-division titleholder (or 115-111 given the opening-round knockdown and later point deduction from Sor Rungvisai). Gonzalez simply outworked and out-landed the game challenger. However, Sor Rungvisai’s fighting spirit and resolve cannot be overlooked. Thai fighters are seldom victorious here in the U.S. but they’re usually uncommonly durable and well-conditioned, and he lived up to that tradition. Now that I think about it, Sor Rungvisai’s victory against Gonzalez (whom most view as a future Hall of Famer) has to be the biggest Thai upset on U.S. soil since Saman Sorjaturong stopped Hall of Fame-enshrined Humberto “Chiquita” Gonzalez at The Forum in Inglewood, California, back in 1995 (a fight I attended as a fan).

Regarding Golovkin’s performance against Jacobs, I thought it was solid and effective but unspectacular. I give him credit for quickly finding range with his jab and landing it consistently all night (without getting tagged too much in return). I didn’t care much for Jacobs’ holding tactics but it was effective in that it prevented Golovkin from getting off on the inside and the odds favorite didn’t seem to have an answer for it.

Jacobs moved well, did a good job of staying off the ropes and was able to nail Golovkin with some solid shots, but I also thought he missed a lot and often landed on GGG’s gloves and arms. (I also thought his technique fell off as his activity grew in the later rounds). If he had taken more chances earlier or stood his ground more down the stretch, maybe he could have won the fight on the official cards.

Where do they go next? Golovkin’s plan is to unify all of the major sanctioning organization titles against remaining beltholder Billy Joe Saunders in June and then go for lineal/RING champ Canelo Alvarez in September. I still favor GGG to win those fights but many will view the potential matchups as more competitive (especially the Canelo showdown) after Jacobs’ bold stand.
I have no idea what Jacobs does next but I hope he doesn’t sit idle for six to nine months. Jacobs’ adviser, Al Haymon, and management team need to take advantage of the career momentum he has right now and maneuver him into a significant middleweight (or super middleweight) match. Chris Eubank Jr. is out there (running his mouth on Twitter as usual). There’s the winner of the proposed Hassan N’Dam-Ryota Murata fight for the WBA’s No. 1 spot (so if Danny were to beat him, he’d position himself for a rematch with GGG). There’s also David Lemieux, Rob Brant, Willie Monroe Jr. and Sergey Derevyanchenko. There are legit contenders and solid up-and-comers for Jacobs to fight.

TAKU, from Japan, proposed two interesting mythical matchups: Salvador Sanchez vs. Julio Cesar Chavez at 130 pounds in 1984 (and he wonders what would have happened to Chavez’s legacy if Sanchez hadn’t died tragically before that fight could be made), and the version of Golovkin that fought Jacobs vs. the best version of Sergio Martinez at 160 pounds. He also had some thoughts on the Gonzalez-Sor Rungvisai fight and the 115-pound division. Though he thought Gonzalez beat Sor Rungvisai, he won’t call the decision “a robbery” since it was “legitimately close, and it’s clear that at 115 (pounds Gonzalez) isn’t the beast that he used to be at 108/112.” He wishes Gonzalez would have stayed at flyweight. He also hopes Inoue will move up to 118 pounds, where he can fight fellow Japanese star Shinsuke Yamanaka now that the 115-pound division is without another dominant force.

DOUGIE’S reply: I think Sanchez would have outpointed Chavez in a very close, hotly contested fight, and maybe done so in a rematch that would have shortened the Mexico City native’s career. But I think Chavez still would have gone on to become a legend of the sport.
I can see the best version of Martinez outworking and outmaneuvering Saturday’s version of Golovkin to a close points win, but my pick would be GGG by late TKO. I think Golovkin’s steady pressure, stiff, well-timed jab, accurate power shots, and Maravilla’s own warrior spirit would get the better of the Argentine southpaw in a very good fight. Unlike Jacobs, who may have been 10-15 pounds heavier than Golovkin, Martinez didn’t have the size to withstand the pressure for 12 rounds.

Regarding Gonzalez-Sor Rungvisai, don’t call it a robbery if you think that’s being extreme (just call it a gift for Sor Rungvisai). Of course, Gonzalez isn’t at his best at 115 pounds. He began his career at 105 pounds and he’s had a lot of hard championship fights over the past 8½ years. But the fact that he doesn’t dominate as much at 115 as he did the lighter divisions does not negate the fact that he soundly outworked, out-jabbed, outslugged and out-landed the Thai challenger.
I agree that Gonzalez was more dominant at junior flyweight and flyweight, but had he stayed at 112 pounds or immediately returned to flyweight after beating Cuadras last year, you know as well as I do that all those hardcore nutcakes hanging out there in comment sections and the Twitterverse would claim he’s avoiding your boy Inoue and a rematch with Cuadras.

Regarding what Inoue does next, I wouldn’t put it past the 23-year-old phenom to take on the Thai veteran despite the high-risk-low-reward stakes the two-time beltholder brings to the table. Inoue doesn’t lack confidence. Sor Rungvisai has the WBC belt, which holds a lot of weight in Japan, and a Japan-Thailand rivalry exists. I can see Inoue going for a WBO/WBC title-unification bout, or allowing Gonzalez to try to avenge his loss and then taking on the winner of the rematch. Although I’m sure he’s beginning to struggle to make 115 pounds, I don’t think he’s done with the junior bantamweight division yet. Along with Gonzalez and Sor Rungvisai, there are attractive matchups against Cuadras and Juan Estrada. And with his talent, size and youth, Inoue would likely be favored to win those fights.

Having said that, a showdown between bantamweight king Yamanaka and Inoue is a passing-of-the-torch match that I’d love to see. It would be the first time an all-Japanese matchup was between two pound-for-pound-rated fighters with a RING title on the line.