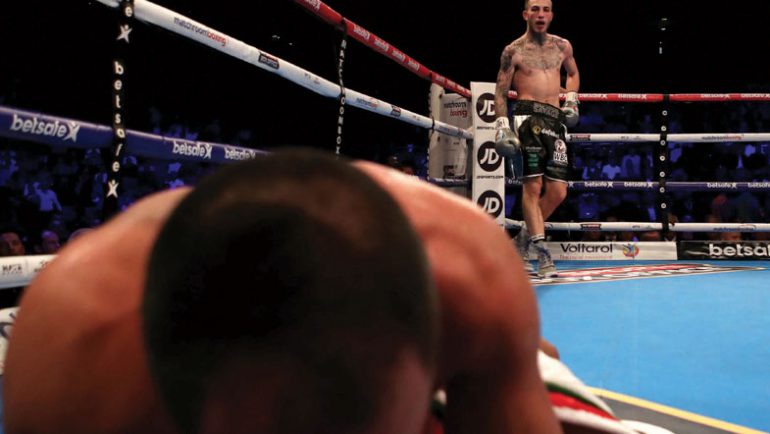 Paulie Malignaggi got knocked out by a body shot in the eighth round of his March 4 fight against Sam Eggington in London. The image of Malignaggi lying on the canvas in agony, unable to rise, wasn’t pretty.

When Malignaggi was in his prime, Eggington wouldn’t have been able to hit him with a handful of rice. But Paulie, 36, is far removed from his prime. On March 4, he looked as out of place in the ring as a 50-year-old man dating a 20-year-old woman.

I like Paulie. I’ve always liked Paulie. I met him when he was 20 years old and chronicled his career in boxing as he moved from infancy to an old man as a fighter.

I was glad the Eggington fight ended on a body shot and not a concussive blow to the head. But punches to the liver add up too.

On December 11, 1981, Muhammad Ali fought Trevor Berbick in the last bout of The Greatest’s illustrious ring career. By that time, Ali was a shell of his former self. Maryum Ali, Muhammad’s oldest child, later told me, “I wanted him to lose. I wanted him to win but I didn’t because, if he won, he’d keep fighting and I didn’t want him to fight anymore. I was in the last row of the first level of the stadium that night. I remember saying to myself, ‘If he loses, he won’t fight again and I’ll be happy. But if he wins, he’ll go on and on.’”

Those were my sentiments when I turned on the television to watch Malignaggi fight Sam Eggington.
Paulie understood the folly of what he was doing. In May 2016, he sat for an interview I conducted for a documentary entitled “Ali: A Life.”

“Ali, Sugar Ray Robinson, Joe Louis; they all fought long past their prime,” Paulie told me. “I think the message in that is, no matter how much greatness you achieve, it will pass and so you have to learn to let it go. Sometimes you want to hold on to it so tight and it has to be ripped from you. The same ego that made you great can also cost you. The ego is the reason you become great. It’s what drives you. But it’s also what makes you stay around too long, and there has to be a way to release it gracefully as opposed to having it ripped from you and shredding you in the process. Trust me, it’s easier said than done. But when you’ve seen it right in front of you in the cases of those great fighters, it doesn’t become any more reality than that.

“There are situations where you have achieved so much and it’s hard to walk away,” Paulie continued. “And there are situations where you might have achieved enough but want more. When you have achieved greatness, like Ali, you become addicted to the fame. You become addicted to the power it gives you. You become addicted to the success. Then there are situations like with myself where I’ve achieved a lot but I feel like I could achieve just a little bit more and maybe my name will get a little bit more respect in history. You start to believe that you can summon this out of you if you really, really believe in it because your self-belief is what got you there in the first place. Obviously, it’s not the case. Nature is nature. We all get old, so both situations present a very harsh set of circumstances, a very harsh set of decisions you have to make that will make your head spin. They really will make your head spin because, when you go, you’re never coming back. And the way you felt last year, you can never feel like that again. The way you felt two years ago, you will never feel that again. You’re only getting older and you’re only going to feel less good.”

Over the years, I kept writing this-is-the-end columns about Paulie. And I always had to write another. “There’s still a bit of coming to grips with the fact that you’re not going to fight anymore,” he told BoxingScene.com. “People think you’re weird that you can’t come to grips with something that to them is so simple. But in reality, it’s not so simple. You want to dream for just a little bit longer. The sun’s coming up, though. It’s almost time to stop dreaming.”

All of us take risks in varying degrees. We don’t eat as well as we should. We don’t exercise enough. We indulge in alcohol or recreational drugs. Paulie exposed himself to the risks inherent in continuing to fight because he craved the high he got from fighting.

“I don’t need the money,” Paulie explained in a piece that aired last year before a fight against Gabriel Bracero on Showtime. “I don’t need the fame. But I still need to fight. Even my friends think I’m a little crazy, and maybe I am. I know fighters don’t age gracefully. I know fighters get hurt. But I also know in my heart, I’ve got to fight at least one more time. Why? Love. Not the normal kind. More like a bad girlfriend. She’s broken my heart; she’ll do it again. And I keep coming back for more. My mind knows better; my heart doesn’t. You see, boxing loved me when no one else would. I was a kid from Sicily, a high school dropout. Boxing gave me things I couldn’t imagine. Boxing let me dream. That’s what I want. That’s what I’m fighting for. That chance to dream again.”

But the losses continued to mount and the purses got smaller. After Malignaggi lost to Eggington, my fear was that, several months from now, Paulie would say, “I can’t end my career on the canvas. I want to go out a winner. All I want is one more fight against a guy who doesn’t pose much of a threat. Then I’ll quit, I promise.”

Part of me is still afraid that will happen. But two days after losing to Eggington, Paulie sent me an email that read, “I will most definitely focus on [commentating] now. No more coming back.”

Later that day, he officially announced his retirement.

I’m still worried. Paulie is an expert boxing analyst for Showtime and Sky Sports, one of the best in the business. But every blow to the head he took in fights and in sparring had the potential to cause incremental brain damage. That’s boxing’s often-unspoken fear. One doesn’t have to reference Muhammad Ali to make the point. Go to a big fight and there are reminders everywhere. Former fighters, including more than a few world champions who slur their words and don’t connect their thoughts as well as they used to.

Meanwhile, let’s celebrate what Paulie accomplished. He won 36 professional fights and held both the IBF 140-pound and WBA 147-pound titles. So many of today’s fighters talk tough and disappear when it’s time to sign a contract. Paulie didn’t talk tough but he went in tough. Look at the fighters who beat him before Eggington: Miguel Cotto, Ricky Hatton, Juan Diaz, Amir Khan, Adrien Broner, Shawn Porter and Danny Garcia. Paulie fought all of them when they were in their prime.

So give Paulie credit for his ring skills and heart, his fighting through the pain of a broken orbital bone and multiple broken hands. Smile when you think of his ever-changing hair and sense of style. Appreciate his honesty and self-deprecating sense of humor.

“The good thing,” Paulie told me not long ago, “is that I’m in some historic boxing highlight reels that people will watch forever. The bad thing is that I’m getting knocked out.”