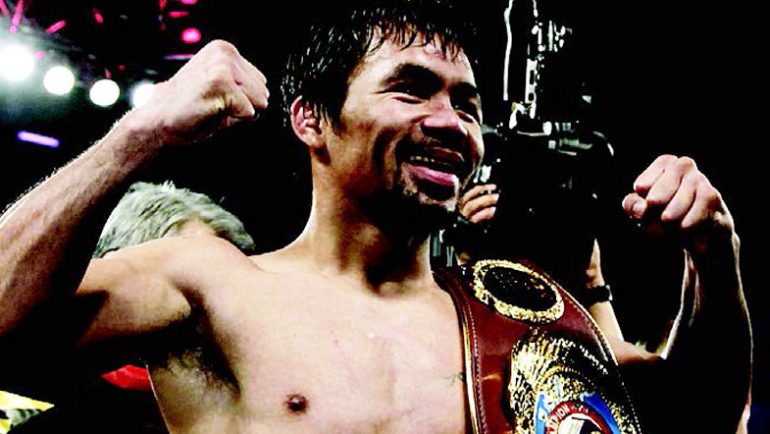 Remember when it was fun to watch Manny Pacquiao? Not his fights – those still at least have the potential – but the hype. The goofy duets with Jimmy Kimmel, press conferences at the Beverly Hills Hotel, helicopter shots of Manny training on the roof at the Wild Card Boxing Club (because … why NOT?), and all of it peppered with Manny’s make-the-people-happy mantra. He did make us happy.

Not so much anymore. In the new paradigm of Mayweather-Pacquiao and now Mayweather-McGregor (no, not going there this month), the quest to secure Pacquiao’s next payday has been a tedious series of ons, offs and why-do-we-cares.

First it was supposed to happen in April against Australian Jeff Horn – a relative unknown who has never fought outside his home country – in Australia. Then, seemingly out of nowhere, word dropped in February that Pacquiao’s adviser, Michael Koncz, was negotiating to face Amir Khan in May … in the United Arab Emirates. Pacquiao’s promoter, Bob Arum, initially said it was news to him, but, presumably after hearing of mysterious investors offering $38 million to finance the fight, he changed his public position to, “That’s what we’re concentrating on – the fight with Amir Khan at the UAE.”

And so for a couple weeks the talk was all about Pacquiao-Khan until Arum announced the deal wouldn’t go through because the investors couldn’t come up with the cash.

Khan, who apparently was instrumental in the Middle East connection, continued to say the money was there, make it happen. Arum said maybe someday, hopefully in November, but where? Dubai? U.K.? He dismissed the U.S. as uninterested in Pacquiao’s next fight (at the same time, conservative organizations like Americans for Tax Reform seized on Arum’s stance as proof of the United States’ unreasonable income-tax laws).

At the end of the day – or at press time, at least – Khan was out and another name was brought up: Horn. In Australia. In July. Who will broadcast it is anyone’s guess. Are we having fun yet?

Nicola Adams, who won a flyweight gold medal at the 2012 Olympics, will make her much-anticipated pro debut on April 8. Marlen Esparza, who stood next to Adams on the podium in London wearing a bronze medal, successfully made her pro debut in March. But the two will never fight, or even spar, Adams told The Mirror in March, because they are now in a relationship. “It’s the perfect partnership,” she said, adding that there would be a healthy competition to see who can win more world titles.

Patty Jenkins, who directed the upcoming “Wonder Woman” movie, confirmed in mid-March on Twitter that the role of Artemis will be played by former two-division titleholder and notorious James Kirkland-tormentor (in a positive way) Ann Wolfe. For those of you who aren’t comic nerds like our own Doug Fischer, Artemis is basically a badass Amazon warrior, so we’re probably looking at a lock on every Best Casting award.

Former undisputed middleweight champion Rodrigo Valdez, best known for a pair of fights against Carlos Monzon, in 1976 and ‘77, died on March 14 in Colombia at the age of 70. Valdez lost both encounters against Monzon but both fights went the 15-round distance and the second was the last, and arguably one of the toughest, of the Argentine Hall of Famer’s career. Valdez retired in 1980 with a record of 63-8-2 (43 knockouts).

Ali’s son, Muhammad Ali Jr., was detained in late February at an airport in Florida after returning from Jamaica, where his mother, Khalilah Camacho-Ali, had given a speech on black history. A family spokesman said Camacho-Ali avoided detention by showing a photo of herself with her late husband, but Ali Jr. was held for two hours and questioned about being Muslim. Customs and Border Protection released a non-specific statement saying its officers are “guided by the highest ethical and moral principles.”

According to the Albuquerque Journal, DNA tests discredited a man long claiming to be the father of the late Johnny Tapia, who will be inducted into the International Boxing Hall of Fame this year. The tests were ordered after Tapia’s widow sued Jerry Padilla for using the boxer’s name for profit.

A week after burglars allegedly broke into Floyd Mayweather Jr.’s Las Vegas home and took items worth $150,000 as he was out celebrating his 40th birthday, “Money” was hit again, this time in Birmingham, England. While Mayweather was at a fan event, somebody broke into his TMT-branded van, doused it with accelerant and burned it to a crisp. Police are still investigating and the biggest question remains: Mayweather had a van?