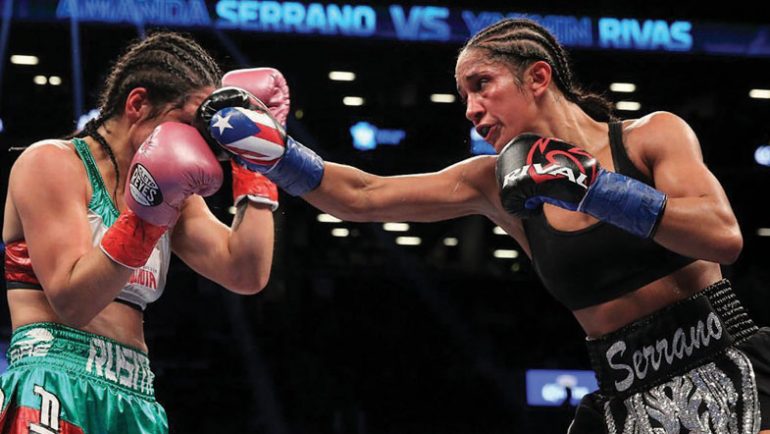 Amanda Serrano had been here before. She had heard the promises and then saw them broken so many times before, so when the first defense of her WBO junior featherweight title against Yazmin Rivas was slated to be broadcast January 14 on Showtime Extreme – making it the first nationally televised women’s title bout in nearly 10 years – she was understandably skeptical.

Even on fight night.

“It wasn’t until I was in the locker room the night of the fight that I actually knew this was happening,” Serrano said with a laugh. “We heard so many stories in the past and we had our hopes up, and it never came through. But finally, when the night was over and I was finally on Showtime Extreme, we could finally say, ‘Wow, it happened, we did it.’”

When Serrano says “we,” she isn’t just referring to her family and her team. On that night at Barclays Center in Brooklyn, her hometown, the 28-year-old was fighting for every woman who laces up the gloves and wants the recognition and paydays they deserve. This was a big deal, and it wasn’t lost on the four-division world champion.

“I tried not to put too much pressure on myself because then I wouldn’t perform the way I did, but in the back of my mind, I was like, ‘Yes, this is for women’s boxing and this is for me.’”

She delivered, scoring a clear-cut decision win over Rivas. It wasn’t a typical Serrano result, as she has ended 23 of her 31 pro wins by knockout. But after injuring her hand in the first third of the fight, she went to Plan B and showed she could box if necessary.

And when the final bell rang, Serrano heard it from the fans, as well as her peers.

“I had a lot of positive feedback,” she said. “Even girls that wanted to fight me in the past were saying, ‘Wow, you did a helluva job, I’m so proud of you.’ And that’s a great accomplishment because this is hard work and we’re all doing it for the same reasons and trying to get recognition, and it finally happened.”

Serrano’s appearance on Showtime Extreme was the first salvo in what is shaping up to be the most important year in the history of women’s boxing. Two-time Olympic gold medalist Claressa Shields headlined Showtime’s ShoBox event on March 10, European Olympic stars Katie Taylor and Nicola Adams are making noise overseas and pound-for-pound queen Cecilia Braekhus will face another member of the P4P list, Erica Anabella Farias, in June.

The talent level in the sport is higher than it’s ever been, a point that isn’t lost on Serrano’s longtime trainer and manager, Jordan Maldonado.

“The game is over because now you have real talent coming up,” he said. “In order to compete with Katie Taylor, Claressa Shields, Marlen Esparza and Nicola Adams, you’re gonna need more than to be a female with a sports bra and boxing gloves. These girls are legitimate fighters. They’re not taking on these 1-17 fighters. These girls are coming right away and they’re talented enough to take on really good fighters. So you step up or move out of the way because within the next six or seven months, all these other girls are not even going to be remembered because they’re going to get lost in the reality of the sport.

“The sport is requiring that the real fighters step up.”

Serrano is one of those real fighters and a secret no longer. She made it through the hard times, held off the temptation to make a move to mixed martial arts and now she will get her platform to show what she can do under the bright lights. So who’s her ideal dance partner?

“I would definitely love to fight Jelena Mrdjenovich,” she said without hesitation. “She’s a great fighter, a great champion and people compare us because we have a lot of power and a lot of knockouts.”

I reminded her that a RING column last year listed Serrano- Mrdjenovich as one of the fights that needed to happen now. Two other matchups on that list – Hardy- Vincent and Braekhus-Farias – have already happened or are signed to take place. The Serrano-Mrdjenovich fight could have joined them in January but Mrdjenovich reportedly turned the bout down over money issues. Serrano admits that she “was pretty disappointed” but she’s also hopeful that the fight with the Canadian star can happen soon. If not, there’s always the pursuit of a fifth divisional crown at 118 pounds and the realization that whatever happens from here, at least the world will be paying attention.

“There were times when I didn’t even want to do it anymore because I was doing all this hard work and nothing was paying off,” she said. “But you have to endure all that for what’s happening now. Now it’s exciting and I can’t wait to see where this can take all the females.”

FIGHTER OF THE MONTH

It could have been a letdown for Cecilia Braekhus, the perfect opportunity for Sweden’s Klara Svensson to swoop in and remove four major welterweight titles from the grasp of the “First Lady.” Instead, following the emotional high of her first fight in her home country of Norway last October, Braekhus kept her foot on the gas with a near shutout win over Svensson. Next up for Braekhus is a June 9 superfight against Argentina’s Erica Anabella Farias, a 140-pound world champion who is making the move up to 147 pounds.