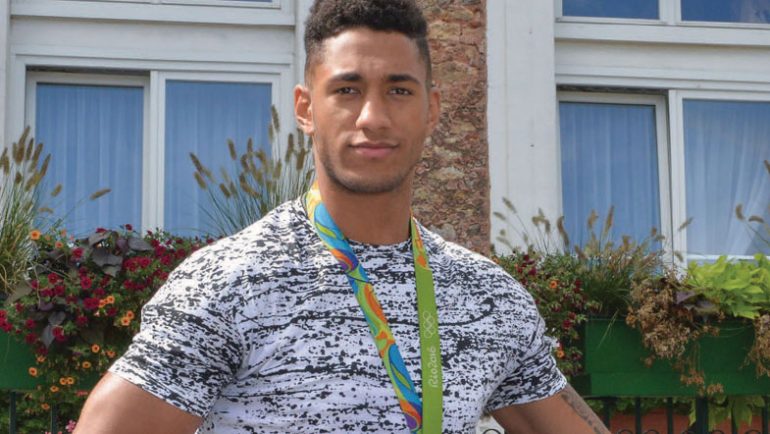 The 2016 Olympic super heavyweight champion from France is 6 feet 7 inches and 230 pounds, as well as charismatic and handsome. But on March 2 in a Manhattan hotel ballroom, Yoka sat on a small couch against a wall basically unseen. A few feet away, welterweight champion Keith Thurman fidgeted at a wide table, engulfed by reporters as he held court on his coming battle with Danny Garcia.

Yoka, 24, was recognized by a lone reporter who spotted him sitting with his fellow 2016 Olympic gold medalist and fiancee, Estelle Mossely. Despite his momentary anonymity, Yoka radiated confidence, serving notice to the top professional heavyweights – including titleholder Anthony Joshua – that he doesn’t plan on being a bit player.

“They don’t have the skill,” Yoka said of the division in general, speaking barely above a whisper so as not to disturb Thurman. “Joshua … I’m happy because he’s working. So now he has skill. He’s powerful. My skill? I’m born with it and also with speed. I know I’m the fastest heavyweight in the world.

“I’m the most skilled heavyweight, and I move in the ring with my legs; I don’t just fight. I will take my time and when I’m ready, you will know it.”

Yoka smiled as he spoke, reveling in the big-fight atmosphere a few feet away, knowing his time will come. He already has a highpowered team behind him. He signed in January with former Golden Boy CEO Richard Schaefer, who has scheduled his pro debut for June 2 in Paris. He has a deal in place with French broadcaster Canal+. And he’s guided by Andre Ward trainer Virgil Hunter, completing the all-star lineup.

“I think I have the best coach for my career,” Yoka said. “Richard has a big history. A lot of promoters wanted to sign me. I met a lot of people. When I fight, I need to feel unique. I need my promoter to be focused on me. And Richard showed that he really wanted me. He came to Paris many times. He doesn’t live in France but he came. He showed me that he really wanted to work with me.”

Yoka is jumping into a revitalized heavyweight division led by Joshua (a fellow Olympic gold medalist to whom he is often compared), Joseph Parker, Deontay Wilder and Wladimir Klitschko. He’s familiar with all of them. Yoka called Joshua a friend and Wladimir Klitschko someone who has imparted advice. He beat Parker in the finals of the 2010 Youth Olympics in Singapore “and I know he wants revenge,” Yoka said with a laugh.

Despite the friendship with Joshua, Yoka would still fight him. “We’ve been friends for a while,” Yoka said. “He’s very good and has made progress with every fight. But I’ve been boxing since I was born. Really, for real, I’m not afraid of anybody. “I’m coming,” Yoka continued.

“I know they’re watching me, too, because they know I’m coming. It’s just sports, nothing personal.”

Yoka already is well-known in France, the result of his amateur success, but he also wants to conquer the U.S. He spoke of making his U.S. debut later this year, possibly in December after fighting three times in France.

“I know that I’m not a star here,” he said of the U.S. market. “I need to build my career. I have a big, big fan base in France. I need to fight there to be a star in my country and then come to the U.S.”

Then Yoka got up, shook hands with the reporter and exited the room. No one seemed to notice. That is likely to change in the coming months.

Conceicao (3-0, 2 KOs) is a highly touted prospect, having captured a gold medal this past summer in the 2016 Rio Games for his native Brazil at lightweight and signing with Bob Arum’s Top Rank. He’s a sharpshooter, adept at counterpunching, as he showed in a second-round stoppage of Aaron Hollis on March 17 at Madison Square Garden’s Theater.

The Abel Sanchez-trained Bohachuk (3-0, 3 KOs), of Ukraine, remained undefeated with a third-round stoppage of Yasmani Pedroso on March 18 on the undercard of Gennady Golovkin- Daniel Jacobs. Bohachuk is a master of distance and has a slicing overhand right, which he uses off the jab. He’s aggressive, but not carelessly so, constantly measuring and probing his opponent for openings before unleashing his attack.

McGoldrick, a 2010 Commonwealth Games champion and 2014 bronze medalist, signed a promotional deal with Matchroom Boxing in March. He is a compact fighter with an aggressive style, an educated left hook and good counter right. He’s usually the one initiating the action, which should make him a fanfriendly fighter in the paid ranks.