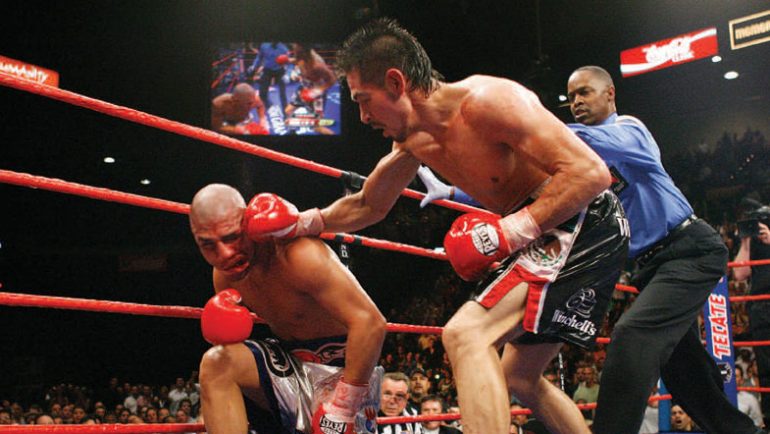 Collection Of Essays Provides Fresh Perspective On ‘The Bittersweet Science’

“The Bittersweet Science” is a collection of 15 essays about the sport and business of boxing by contemporary writers. Some of the pieces have been previously published. Others were written exclusively for this book. As with any anthology, some entries are better than others. Ten of the pieces merit particular praise. Listed alphabetically by author, they were written by Robert Anasi, Brin- Jonathan Butler, Donovan Craig, Charles Farrell, Rafael Garcia, Gordon Marino, Hamilton Nolan, Carlo Rotella, Sam Sheridan and Carl Weingarten.

In an introduction to the book, Rotella and Ezra write, “The more you know about boxing, the more you discover that you never truly know what’s going on. No matter how many layers of meaning you peel away, there will always be others beneath them.”

In that regard, the essays go beyond what the editors call “the usual sports-page concern with winners, losers, and athletic drama.” They cover a wide swath of boxing territory from the opinionated and knowledgeable Charles Farrell writing unapologetically about fixing fights to Brin-Jonathan Butler’s indepth exploration of Roy Jones Jr.’s psyche. There are dramatic accounts of ring action at the professional and amateur levels and a look at long-ago ring history.

The book also serves the purpose of introducing boxing fans to some good writers they might not know. One of these scribes is Rafael Garcia.

“The truth is,” Garcia writes, “there’s no purity in boxing. Not all we see is real, and we’ll never see it all.

“Seen from a distance,” Garcia continues, “boxing is a deceptively simple spectacle: two men beating on each other until cunning, physical prowess, or a combination thereof produces a winner. Many who watch boxing never move past their romantic notion of the sport, constantly framing what they see in terms of concepts such as courage, valor, honor, and pride. Yet these same notions are hammered into irrelevance by forces significantly more pressing to the fighters and the suits promoting and managing them; namely money, power, and influence.”

Viewing boxing through the prism of the first fight between Miguel Cotto and Antonio Margarito, Garcia observes, “You can’t just jump to the end of a fight and skip everything that happens in between. To do that would be to miss everything that makes boxing boxing. More than in any other sport, how and why one fighter wins and the other loses is of the utmost importance and can have massive consequences for each one’s future.”

Garcia’s description of the seventh round of Margarito’s now-tarnished victory over Cotto is particularly good writing: “It was either brutal or thrilling to watch, depending on whom you were rooting for or what side of your brain was calling the shots. It was at this moment that what had been billed as a fight became a rite, as there was little question from that point on as to who was the stronger fighter causing the damage and who was the one getting hurt. Cotto kept fighting, of course, after the turn of the tide in round seven. But for the rest of the night, Margarito’s most significant enemy was no longer Miguel Cotto but the timekeeper. The contest was decided in that brutal round. As Margarito walked back to his corner at the end of the seventh, his face and torso and back splattered with Cotto’s fresh blood, he nodded to the fans celebrating at ringside. It was clear that thereafter all Margarito had to do was keep hacking and chopping away at Cotto, keep grinding him down and keep hammering him with those heavy fists until Cotto couldn’t take it anymore. Then, at some point, Cotto would stop fighting, and that would be it. That’s exactly the path the contest took. Cotto went from sharpshooter to prey, just as Margarito went from lumbering target to heartless hitman.” Garcia then asks the question, “What does it say about us that we’re willing participants – and paying customers – in this sort of blood spectacle in which someone as hurt and helpless as Cotto was for a large part of the contest had to endure so much physical punishment from a man who was obviously going to defeat him that night. The question is not novel in any way, but that doesn’t take away from its sting. Fans of boxing have tried to deal with it for a long time, and all of us who enjoy the sport have learned that a corollary of our love for it is that we have to make peace with more than a few ugly truths.”

Finally, Garcia notes, “There are times when boxing matches resemble more a bullfight than they do a sports contest, when only a deus ex machina will do in changing the outcome. Bullfights are all about the journey and not the destination. The inevitable outcome is that of a bull lying dead even though there are many ways to arrive at that outcome.”

In “Why I Fixed Fights,” Farrell begins with the premise that “no sport is romanticized more than boxing.” But the truth of the matter as he sees it is, “Boxers are born poor and they usually die poor. For their short spell in the business, they inhabit a place in its professional hierarchy that all but guarantees they’ll remain poor even during their active careers.”

Getting to the heart of his subject, Farrell writes, “Why did I fix fights? I fixed fights because it was the smart thing to do.” He then recounts setting up a fight for Leon Spinks in the dying years of Neon Leon’s ring career against a novice named John Carlo, who was making his pro debut. Farrell engaged in all manner of chicanery, including the creation of a fictitious 13-2 record for Carlo. But he ruefully acknowledges, “I failed to take the one step needed to guarantee the result. I didn’t fix the fight.”

Carlo knocked Spinks out in the first round.

“In the real world,” Farrell concludes, “boxers and their managers prearranging the outcome of fights, working collusively against a hostile system, makes sense. Fixing fights, even at the expense of the public, isn’t just good business. It’s a survival strategy for the disenfranchised class in boxing: the fighters themselves.”

Sam Sheridan weighs in with an essay entitled “What Boxing Is For.” Among the thoughts Sheridan shares are:

• “Not all men are created equal in boxing, and we know it.”
• “Professional boxing is about money. If it’s about anything else, you probably shouldn’t be doing it.”
• “Fighting is a little like losing your virginity. Before you do it, there is a lot of speculation, a lot of anxiety, some wild flights of imagination. Then you start doing it and you find, ‘Oh, this is fighting. I’m still me.’ You aren’t transformed into something else. It’s not some dark door you pass through. The world is still the world.”
• “[Watching a fight] has to be live. Tape it and watch it later, and it’s like reading about a fine wine versus drinking it. It has to be happening in the moment. We’re all discovering it together, the tick of seconds, the real-time surge of real wonder in the crowd.” A sampling of other worthwhile thoughts in “The Bittersweet Science” include:
• Gordon Marino: “It’s as though the crowd gets its red badge of courage with the fighter’s blood.”
• Donovan Craig: “Usually a street fight is over so quickly that you don’t have time to appreciate it. In a boxing match, you have time to appreciate what’s going on.”
• Brin-Jonathan Butler: “If you’re looking for happy endings for your heroes, boxing remains one of the worst places in America to look.” “The Bittersweet Science” is a good book.

Thomas Hauser can be reached by email at [email protected] His most recent book – “A Hard World: An Inside Look at Another Year in Boxing” – was published by the University of Arkansas Press. In 2004, the Boxing Writers Association of America honored Hauser with the Nat Fleischer Award for career excellence in boxing journalism.