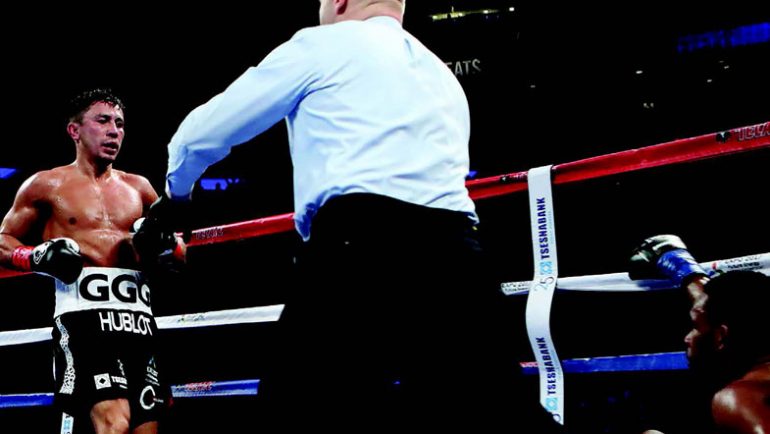 It was a different Gennady Golovkin. One nobody had ever seen. But there he
was, in a round he had never experienced. The 12th had been scheduled many times. But GGG never got there. He just didn’t need it.

Daniel Jacobs changed all of that, forcing Golovkin to go the distance and into the nerve-wracking experience of having to hear his fate determined by subjective scores announced after the final bell.

GGG still prevailed, his perfect record as firmly in place as the initials that serve as his nickname. His long-term goal of finally unifying all of the middleweight titles is still there, possibly against WBO beltholder Billy Joe Saunders at home in Kazakhstan in June. He got the decision, unanimously: 115-112 on two cards and 114-113 on the third.

Less unanimous, however, is the undisputed aura he possessed before the opening bell. Back then, he was more than unbeaten. He was considered unstoppable. That’s not so clear anymore, mostly because the resilient Jacobs, who at fight time was bigger at an estimated 180 pounds and, despite getting knocked down in the fourth with a couple of right hands, looked stronger in shaking off just about everything Golovkin threw.

That knockdown seemed to presage the stoppage that had become almost a GGG routine. Golovkin (37-0, 33 knockouts) had scored 23 successive KOs. No. 24 looked inevitable. But Jacobs, nicknamed “The Miracle Man” after overcoming cancer in 2011, looked at GGG after the knockdown and smiled as if to say he had faced a lot worse.

“After the knockdown, I told him he had to kill me,” Jacobs told reporters during a post-fight news conference when he also said he thought he won the fight. “He’s not this boogeyman, this knockout artist. When I got up, I thought: ‘This is all he has?’ There were many times during the fight I went toe-totoe, because I knew I could.”

Jacobs’ performance might have left some other people wondering whether they could do the same and maybe more. People like Canelo Alvarez. For the last couple of years, there’s been a lot of futile talk about a Canelo-GGG showdown. That fight has yet to happen, in part, say Canelo’s critics, because Golden Boy Promotions hasn’t been willing to risk a loss for their 26-year-old cash cow against the dreaded GGG.

But maybe Jacobs stripped away that alleged fear. If so, Jacobs might have done Golovkin a big favor. “We hope the other fighters think that Gennady’s not as dangerous anymore, so now they’ll sign a contract instead of just talking about fighting,” said Golovkin promoter Tom Loeffler, who didn’t name anybody in particular and didn’t have to.

In the end, GGG could have emerged from the close contest smarter and wiser. It’s hard to be a championship fighter with so few championship rounds on the resume. In hindsight, CompuBox also seemed to support the judges. In total punches, GGG landed 56 more than Jacobs. In jabs, it was no contest: GGG landed 74 more than his rival, displaying some slick versatility and durability few have ever seen.

Then again, nobody had ever seen him go 12 rounds, either.

Feb. 18, Cincinnati (Showtime)
“AB,” Adrien Broner’s mocked monogram, moved onto the alphabet’s third letter. That’s “C” for comeback. It’s a step Broner never envisioned when his initials and ambition were About Billions. But after flushing away cash and nearly his career amid trash-talk and jail time, he left no other option.
The restart came against Adrian Granados in a fight tougher than anticipated. Broner (33-2, 24 KOs) injured his left hand early and then battled to win a split decision over Granados (18-5-2, 12 KOs), a longtime friend.
“Adrian is world class,” said Broner, who won on two cards, 97-93 and 96-94, and lost on the third, 97-93. “Guys duck him.”

Question is, would Broner duck a rematch? Granados earned one. But Broner has name recognition. He already was being mentioned as a possibility for Terence Crawford, Manny Pacquiao, Keith Thurman and Ricky Burns.

After a close four rounds, Alvarez finished Bute with successive right hands at 2:22 of the fifth.

“I’ve been practicing that move for a long time,” Alvarez said.
He’ll have more time to practice.

The victory was supposed to set Alvarez up for a shot at WBC light heavyweight champ Adonis Stevenson. But Stevenson already has plans for an April 29 bout against Sean Monaghan in New York. In mid-March, Alvarez agreed to step aside for an undisclosed sum.

Feb. 25, Birmingham, Ala. (Fox)
Mention Deontay Wilder and there’s an immediate debate about what’s missing. From footwork to tactical skill, it’s a long list. But there’s something else missing. Losses.

That “0” adds up to the reason Wilder is so compelling. His right hand is a dramatic equalizer, even after surgery.

It landed once again, staggering Gerald Washington (18-1-1, 12 KO) and leaving him defenseless for a left that would set up the ending at 1:45 of the fifth round. It lifted Wilder, the WBC champ, to 38-0, including 37 stoppages, a 97 percent KO rate that ranks as the best in history among elite heavyweights.

With attention on the Anthony Joshua-Wladimir Klitschko bout, it also was a sure sign that Wilder, who trailed on two cards, is still a player despite surgery on his right hand and biceps after a July victory over Chris Arreola.

Feb. 25, Birmingham, Ala. (Fox)
Jarrett Hurd was studying a different kind of fighting as a volunteer fireman five years ago. Then he decided to give up one tough trade for another.
As a full-time student in the sweet science, Hurd quickly became a hot prospect and is now the hottest fighter in the junior middleweight division.
Hurd’s constant pressure had already taken its toll when his right hand floored Harrison late in the ninth round. Harrison got up just in time but made it clear he didn’t want to continue by spitting out his mouthpiece. And just like that, Hurd won his first major title, one that had become available when Jermall Charlo moved to middleweight.

March 2, Tokyo (Nippon TV)
Shinsuke Yamanaka must feel blessed. After all, he calls his best punch “God’s Left.” But that blessing isn’t limited to just one hand. Turns out, Yamanaka is blessed in a lot of ways.

At least he was against Carlos Carlson, who was overwhelmed by blessed lefts, rights, three-punch combos and who-knows-what-all in a one-sided loss to Yamanaka (27-0-2, 19 KOs) in the bantamweight’s 12th successive defense of his WBC belt – the second-longest title reign in Japanese history
Referee Ian John Lewis said last rites to the scheduled 12-rounder after Carlson (22-2, 13 KOs), of Tijuana, hit the canvas for the fifth time at 57 seconds of the seventh.

“In the seventh round, my right was good from the beginning, and when I use my right better, it usually leads me to land my left,” said Yamanaka, a 34-year-old fighter who has never fought outside of Japan.

Thurman played it safe, winning a split decision in a fight that beforehand had promoters talking about Sugar Ray Leonard-Thomas Hearns in 1981. The WBC and WBA titles were at stake then, too.

But those belts were just costume jewelry in the bigger drama played out in Leonard’s victory, a 14th-round stoppage. That one is remembered for what happened. Titles were incidental.

But there was no debate about the CBS telecast. It was clear a victory: a peak of 5 million-plus viewers, a rare success story for boxing in Saturday’s prime-time slot.

March 4, London(Sky Sports)
Tony Bellew had a role in “Creed,” a 2015 “Rocky” sequel. But it was no act. Boxing is only a role for fools and fakers. Bellew is neither. He’s real at any weight.

Bellew, the WBC’s cruiserweight titleholder, stunned David Haye (28-3, 26 KOs), knocking him down in the seventh round and finishing him in the 11th. Before the opening bell, Haye talked trash. In the sixth round, he ruptured his right Achilles tendon. After the bout, he talked about how he had endured and why he wants a rematch. Haye is always talking, being the celebrity that Bellew is not.

“One guy trains to have a beautiful body and one guy trains to fight to the finish, and that showed,” said Bellew (29-2-1, 19 KOs) after overcoming a broken hand with sustained power that drove Haye through the ropes, prompting his corner to surrender at 2:16 of the 11th.

March 11, Verona, N.Y. (HBO)
It was scary. It was beautiful. One punch from David Lemieux defined the singular expression of what power means and can do.

Lemieux (37-3, 33 KOs) landed a left, a shot as sudden as it was precise and so loaded with danger that it left Curtis Stevens unconscious and seemingly in peril to an anxious crowd not sure whether to cheer or mourn.
“Joy and relief,” Lemieux manager Camille Estephan told the Montreal Gazette of his feelings at the moment – 1:59 of the third round – when Lemieux’s blow sent Stevens crashing onto the canvas. “Then, serious concern. I thought he could be dead.”

Minutes later, Stevens (29-6, 21 KOs) regained consciousness. He was carried out of the ring

on a stretcher and released from a hospital later that night.
“I’m good y’all,” Stevens said in a tweet. “I got caught real good.”
Real good to hear, too.

March 11, Ludwigshafen, Germany (Sky Sports)
Demetrius Andrade did what he hasn’t been doing for the last three years. He got busy.

Andrade, who fought only three times in more than three years, was a whirlwind, scoring often enough for a split-decision victory over former amateur rival Jack Culcay.

According to CompuBox, Andrade threw 953 punches over the 12 rounds.
“I thought I did everything that I needed to do,” said Andrade (24-0, 16 KOs), a Providence, Rhode Island, fighter who was stripped of a title in 2015 for inactivity.

At 29, Andrade knows it’s time to get busy against the best in the junior middleweight division.

NO. 4 SRISAKET SOR RUNGVISAI MD 12 NO. 2 ROMAN GONZALEZ
March 18, New York (HBO PPV)
It was controversial. It was even a little sad. It was also a reminder about why there are weight classes. It was a lot of things. Mostly, it was the end of Roman Gonzalez’s improbable pound-for-pound reign.

The skills were evident, yet not enough against Srisaket Sor Rungvisai (42-4-1, 38 KOs), who dropped him in the first round, bloodied him in the third with a head-butt and somehow did enough over the next nine to win a majority decision, 114-112 on two cards and 113-113 on the third.

How anybody loses while landing 441 punches, according to CompuBox, is anybody’s guess. But that’s what happened in Gonzalez’s only defeat in the ex-flyweight’s second bout at junior bantamweight.