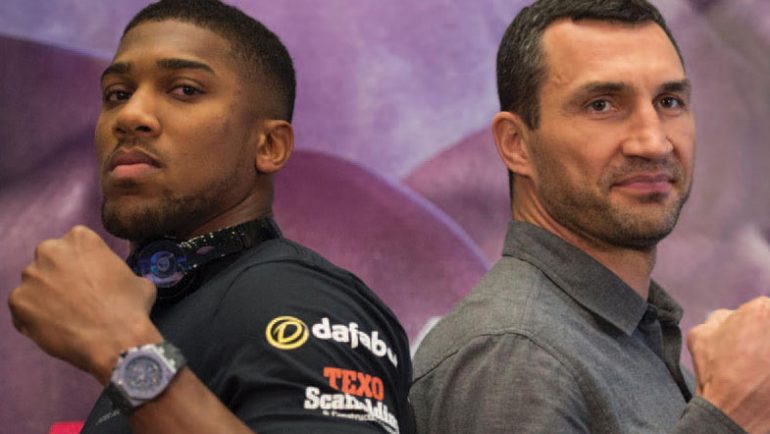 ANTHONY JOSHUA VS. WLADIMIR KLITSCHKO
Date: April 29
Location: Wembley Stadium, London
Division: Heavyweights (for Joshua’s IBF and vacant WBA titles)
RING Ratings: Klitschko No. 1; Joshua No. 5
TV: Sky Box Office (U.K.)
Watchability rating (up to five stars): *****
Also fighting: Katie Taylor vs. TBA, lightweights.
Significance: This fight could determine the immediate future of the division. If Joshua (18-0, 18 KOs) wins, a new era will have begun in earnest. If Klitschko (64-4, 53 KOs) wins, the division will look a lot like it did for a decade. Joshua has rolled over his foes but has never faced anyone near Klitschko’s ability. Klitschko looked his age in a one-sided loss to Tyson Fury in his last fight, in November 2015. That’s a long layoff, particularly for a 41-year-old.

CANELO ALVAREZ VS. JULIO CESAR CHAVEZ JR.
Date: May 6
Location: T-Mobile Arena, Las Vegas
Division: Super middleweights (catchweight of 164.5 pounds)
RING Ratings: Alvarez C middleweight, No. 1 junior middleweight, No. 8 P4P
TV: HBO Pay-Per-View
Watchability rating (up to five stars): *****
Also fighting: David Lemieux vs. Marcos Reyes, middleweights; Lucas Matthysse vs. Emmanuel Taylor, welterweights; Joseph Diaz Jr. vs. Manuel Avila, featherweights.
Significance: Canelo (48-1-1, 34 KOs) sets up a showdown with Gennady Golovkin if he beats his Mexican rival in a huge fight among Mexican fans. And most believe he will. Canelo has all the advantages except size. Chavez (50-2-1, 32 KOs) is not known for his work ethic but he’ll be motivated for this one. A victory would turn his career completely around.