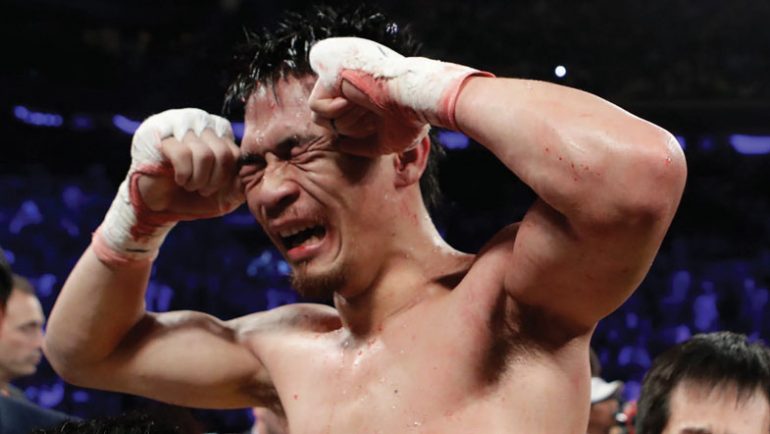 I thought Roman Gonzalez did more than enough to earn the victory against Srisaket Sor Rungvisai on the Gennady Golovkin-Daniel Jacobs card March 18 in New York. The majority of observers agree with me.

The reality is this, though: The veteran Thai fighter upset the No. 1 fighter in the world poundfor- pound, which is a significant accomplishment.

Sor Rungvisai’s previous seven fights were six-rounders against nobodies in Thailand. The former 115-pound titleholder hadn’t engaged in a real fight since he stopped Jose Salgado in May 2015.

So we really didn’t know what to expect from him against Gonzalez.

What we got was an absolute beast. Sor Rungvisai, who was stopped in his first two fights but never again, took an astounding number of hard punches from Gonzalez, hardly blinked and never stopped attacking his gifted, more noted opponent.

Indeed, from a purely physical standpoint, Sor Rungvisai was impressive. I thought during the fight, “Who the hell is going to want to fight this guy after witnessing this?”

Gonzalez battled through a firstround knockdown and two bloody cuts to land more punches than Sor Rungvisai did, including a division record 372 power shots, according to CompuBox, but the judges evidently rewarded Sor Rungvisai for his relentless aggression.

Two judges scored the fight 114-112 (seven rounds to five) while the third had it 113-113, giving Sor Rungvisai the WBC junior bantamweight title and altering pound-for-pound lists around the world.

Everyone knows who Srisaket Sor Rungvisai is now.

POUND FOR POUND: After reattaching our jaws following Srisaket Sor Rungvisai’s upset (and for some, upsetting) win over Roman Gonzalez (No. 1 last month), the list was adjusted accordingly. Gonzalez dropped to No. 4 below Gennady Golovkin (No. 4 last month), who narrowly passed his test with a decision over Daniel Jacobs (unrated) and rose to No. 3. Subsequently, the shift elevated Sergey Kovalev one spot to No. 2 and – cue “Hail to the Chief” – Andre Ward to No. 1.

HEAVYWEIGHTS: Dominic Breazeale (unrated last month) provided some welcome entertainment en route to a fifth-round knockout of Izuagbe Ugonoh (also unrated) on the Deontay Wilder- Gerald Washington undercard. Breazeale got the No. 10 spot as a result, replacing Jarrell Miller. Breazeale moved up to No. 9 and Miller returned, however, after David Haye (No. 7 last month) lost to Tony Bellew (No. 3-rated cruiserweight) and dropped out.

MIDDLEWEIGHTS: Curtis Stevens (unrated) is the only person who won’t remember the third-round knockout punch delivered by David Lemieux, who was lifted from No. 4 to No. 3 by the nightmare-inducing win.

JUNIOR MIDDLEWEIGHTS: There was a shakeup after Jermall Charlo (No. 2 last month) went up in weight and Jarrett Hurd (No. 9 last month) grabbed a very solid win and the IBF title with a ninth-round stoppage of Tony Harrison (unrated). Everybody previously below Charlo moved up a notch except for Liam Smith, who stayed at No. 8 after Hurd jumped over him to No. 7. The resulting vacancy at No. 10 was filled by Germany’s Jack Culcay. Culcay was then replaced by 2016 RING Prospect of the Year Erickson Lubin, who TKO’d Jorge Cota (unrated) in four rounds.

WELTERWEIGHTS: Lamont Peterson found his way back to the ratings at No. 10, replacing Russia’s Konstantin Ponomarev after defeating David Avenesyan (unrated) by a unanimous decision. At the other end of the list, Keith Thurman won a title-unifying split decision against Danny Garcia and went from No. 2 to No. 1. Garcia (No. 7 last month) slipped to No. 8.

JUNIOR FEATHERWEIGHTS: Rey Vargas climbed from No. 4 to No. 3 after winning a vacant belt with a majority decision over unrated Gavin McDonnell.

BANTAMWEIGHTS: Tomoki Kameda (No. 8 last month) took another fight well above 118 pounds and was dropped from the list. With his departure, the empty spot at No. 10 was inherited by Venezuelan Liborio Solis.

JUNIOR BANTAMWEIGHTS: With Gonzalez’s somewhat controversial loss to Sor Rungvisai, he dropped from No. 2 to No. 3 and the Thai underdog jumped from No. 4 to No. 2. Carlos Cuadras (No. 3 last month), who struggled but eventually beat David Carmona (unrated) on the same card, slipped to No. 4.

FLYWEIGHTS: Former strawweight title challenger Juan Hernandez (unrated last month) knocked No. 7-rated Nawaphon Por Chokchai out and off the list, picking up the No. 10 spot and a shiny green belt for his trouble.