2016 Ring Awards: Finalists for Fighter of the Year 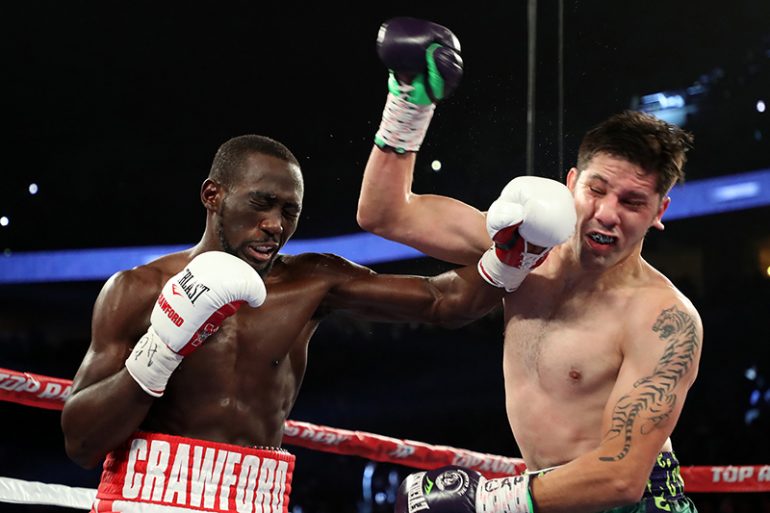 Photo by: Mikey Williams/Top Rank
16
Jan
by The Ring

Leading up to the announcement, we will give you the five finalists in one category each day. Day 10: Fighter of the Year.

TERENCE CRAWFORD Crawford remained one of the hottest fighters on the planet with three more impressive victories, including a unanimous-decision wipeout over then-unbeaten Viktor Postol in what some saw as a 50-50 fight. Crawford also beat Hank Lundy and John Molina.

CARL FRAMPTON Frampton started his 2016 campaign by scoring a 12-round split decision, which should have been unanimous, over Scott Quigg. In doing so, he unified two junior featherweight titles before moving up in weight to outpoint WBA 126-pound belt holder Leo Santa Cruz.

ROMAN GONZALEZ The current pound-for-pound king had another good year. He nearly shut out an overwhelmed McWilliams Arroyo and then moved up in weight to face talented titleholder Carlos Cuadras. Gonzalez had to work hard but emerged with a major belt in a fourth weight class.

VASYL LOMACHENKO No one dazzled fans in 2016 more than the gifted Ukrainian, who remained on his impressive run by stopping Roman Martinez and Nicholas Walters in five and seven rounds, respectively. The imposing Walters was so baffled, so frustrated, so beaten down, that he simply quit.

MANNY PACQUIAO Pacquiao isn’t the fighter he once was but he is still getting good results. The eight-division titleholder bounced back from his loss to Floyd Mayweather Jr. in 2015 by outpointing Tim Bradley in their third fight and doing the same against Jessie Vargas seven months later.

THE RING year-end award winners for 2016, including our Fighter of the Year, will be announced tomorrow.