2016 Ring Awards: Finalists for Trainer of the Year 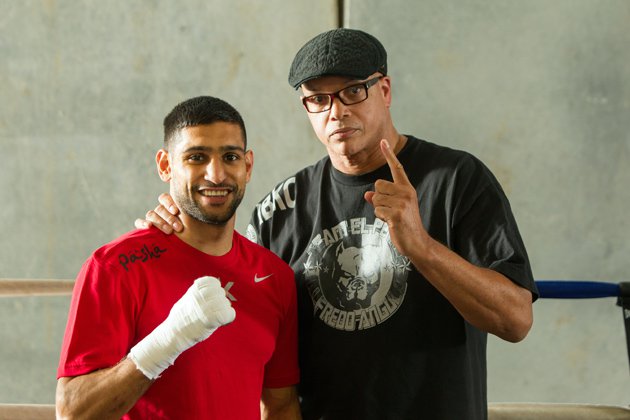 Khan and Hunter.
13
Jan
by The Ring

Leading up to the announcement, we will give you the five finalists in one category each day. Day 7: Trainer of the Year.

VIRGIL HUNTER We’ll never forget the way Hunter yelled in Andre Ward’s ear between rounds of his tough bout with Sergey Kovalev. Ward struggled that night but came away with a close but unanimous decision victory, as well as the IBF, WBA and WBO light heavyweight title belts. Did Hunter’s exhortations help Ward win? In such a competitive fight, we’ll bet they did.

SHANE MCGUIGAN Not only has he been able to sidestep comparisons to his famous father, McGuigan has also established himself as an innovative and sought-after coach. Younger than many of his fighters, McGuigan’s success with the undefeated Carl Frampton has attracted such recent clients as George Groves and David Haye.

ARNULFO OBANDO He was a brilliant trainer, and in Roman Gonzalez, Arnulfo Obando coached the best pound-for-pound fighter on the planet. “Chocolatito” defended RING and WBC flyweight titles against McWilliams Arroyo before moving up to junior bantamweight to capture the WBC title at the expense of Carlos Cuadras. Tragically, Obando died in November at age 53 after suffering a stroke.

EDDY REYNOSO Handling Mexico’s most beloved fighter is a major responsibility, but Reynoso guided Canelo Alvarez to even more success in 2016. Along with Alvarez’s knockout wins over Amir Khan and Liam Smith, Reynoso steered IBF strawweight titleholder Jose Argumedo to a unanimous decision win over Julio Mendoza and a third-round KO of Jose Jimenez.

ABEL SANCHEZ As Gennady Golovkin will tell you, he likes to fight “Mexican style.” Much of that can be attributed to his longtime partnership with Sanchez. Sanchez once described the young “GGG” as “fighting like a Klitschko.” Since those early days, Golovkin has become a crowd-pleasing KO artist.