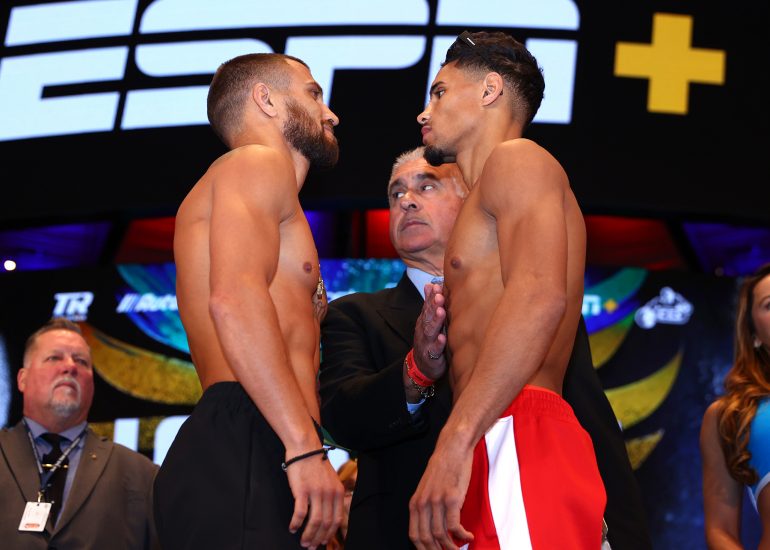 Vasiliy Lomachenko and Jamaine Ortiz face off at the weigh-in prior to their lightweight fight on October 28, 2022, in New York City. (Photo by Mikey Williams/Top Rank Inc via Getty Images)
29
Oct
by Ryan Songalia

Jamaine Ortiz might be viewed by many as just another opponent for Vasiliy Lomachenko, but he can’t envision anything other than victory this Saturday.

Not after the sacrifices he has made to pursue his boxing dream.

Long before the 26-year-old was scheduled to headline an ESPN card at The Theater at Madison Square Garden, Ortiz was just another youngster from Worcester, Mass. who dreamt of making it big as a prizefighter. His mother began bringing him to the local Boys & Girls Club at age 7 to learn how to box in hopes that he’d do his fighting in the ring and not in the schoolyard.

Jamaine was just 14 years old when his mother was sentenced to prison time. Ortiz’s father came up from Florida to bring Jamaine and his brother to come live with him in Orlando, but Jamaine refused. He had lived with him previously, but his father was only able to take him to the boxing gym three days a week, and that wouldn’t fit the level of dedication he had in mind.

Instead, Ortiz stayed in Massachusetts, house-hopping between an aunt and his best friend. Some would see that as an unstable way to live, but for Ortiz, there was nowhere he felt safer than at that Boys & Girls Club.

“Boxing has been a long road; any fighter can tell you that. It’s part of the process and it’s all worth it. All the sacrifices I’ve made, look where it’s gotten me today. I’m fighting one of the best in the world to become one of the best, and headlining ESPN at the Mecca of Boxing,” said Ortiz (16-0-1, 8 knockouts).

“I’m a vision of hope for all the kids around my city and in New England who have seen me come up to where I am today. They’ve seen the sacrifices that I’ve made, to continue to pursue my passion and not let anybody bring me down.”

Ortiz has been in this position before. His last outing, a 10-round unanimous decision win over Jamel Herring in Las Vegas, saw him once again cast as the up-and-coming underdog against a former champion on the rebound. Ortiz made his statement, out-hustling Herring and sending the former Olympian into retirement.

That win led to him facing Lomachenko (16-2, 11 KOs), a former champion in three weights who has been seen as one of the pound-for-pound best fighters for the past decade. A win for Lomachenko puts him in position to challenge undisputed lightweight champion Devin Haney, who is fresh off of back-to-back dominant wins over George Kambosos Jr.

Ortiz envisions that opportunity going to him instead.

“I think they’re really underestimating me. I understand the caliber of level of Lomachenko and what he’s done, but I’m gonna show the world that this wasn’t a tune-up, this wasn’t a warm-up, and Lomachenko is in for a fight. After this, they won’t be saying that about me anymore,” said Ortiz, who is trained by Isaac “Rocky” Gonzalez.

“After I beat Lomachenko, I’ll fight for the undisputed championship and continue to make history and become a legend in this sport.”

Ortiz already has experience fighting some of the best in the world, just not as a professional. But as an amateur, Ortiz faced Jaron Ennis, Gary Antuanne Russell, Richardson Hitchins and Teofimo Lopez, among others. His greatest amateur highlight was competing in the 2015 U.S. Olympic trials in Baltimore, he says.

Despite his amateur experience, Ortiz says only local promoter Jimmy Burchfield of CES Boxing showed any interest in signing him to a professional deal. Ortiz turned professional in 2016 and built his record on smaller shows in New England before getting his first significant exposure on the undercard of the Jake Paul-Nate Robinson pay-per-view in 2020, when he knocked out Sulaiman Segawa in seven rounds. He showed in his next fight he could respond to adversity, overcoming two knockdowns and a bloodied nose to hold Joseph Adorno to a majority draw. He followed that up with a unanimous decision over Nahir Albright in February before upsetting Herring. 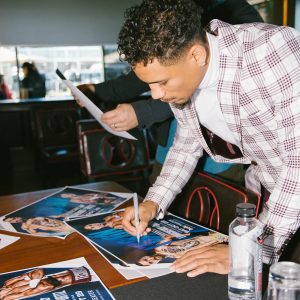 Ortiz has had the benefit of fighting three southpaws in his last four bouts, but knows Lomachenko is a different beast altogether.

“I haven’t seen another fighter like him,” said Ortiz,Who weighed 134 pounds, just .6 of a pound less than Lomachenko.

“I’m just preparing to be the best Jamaine Ortiz to face the best Lomachenko.”

Lomachenko, 34, is coming off two dominant wins over Masayoshi Nakatani and Richard Commey, following his loss to Teofimo Lopez in 2020. Lomachenko hasn’t fought in nearly a year, having been inactive in part due to the ongoing war in his native Ukraine. Ortiz knows that Lomachenko is hungry to do something he’s never done before, which is become undisputed champion. He also knows how big a win for him would be.

“That will be the talk. It’s always been Lomachenko but once I beat him, who knows if he’ll still be fighting.”

MORE: Lomachenko says heart is in Ukraine but focus is on Jamaine Ortiz