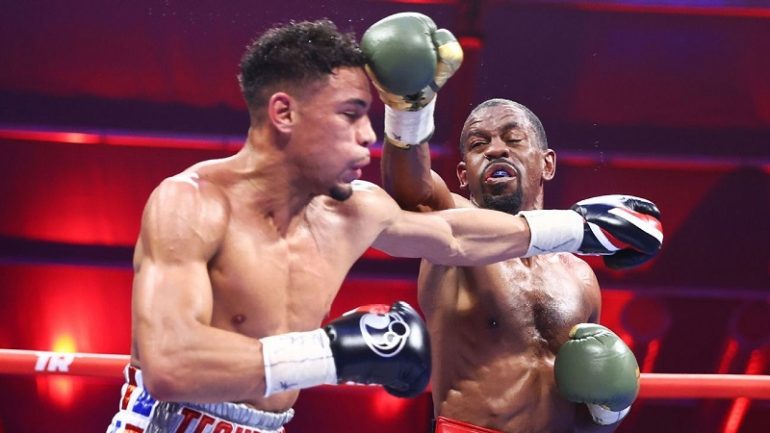 “I still got a lot of work to do,” Ortiz (16-0-1, 8 knockouts) said after the fight, “but I’m not afraid of challenges and I’m here to prove that I’m the best to myself, not anybody else.

“Much respect to a former world champion. I hope people recognize me and I get higher-profile fights after this fight. I think I might move up to 140 pounds but if there is a good fight at 135 for a world title, I’ll stick around.”

“[Ortiz] was just quicker on the trigger. He had a better output. I wasn’t tired or anything; he just beat me to the draw.”

When asked about retirement, Herring wouldn’t commit to an answer but definitely dropped hints. “I have to think about it but, after tonight, I just don’t think I’m where I need to be at.”

After a quick start from the former 130-pound titlist in the opening round, Ortiz immediately worked his way back into the fight in the second. Things were tight in the third and fourth but Ortiz seemed to find his rhythm in the middle rounds. Meanwhile the veteran appeared to be slowing down toward the end of the bout.

Ortiz made a statement in the final two rounds, landing 90 punches in the ninth and 10th. His 46 connects in the final round were the most ever landed by a Herring opponent.

Ortiz vs. Herring served as the co-main of the Janibek Alimkhanuly vs. Danny Dignum card. The Top Rank card was broadcast on ESPN.

In the TV opener, welterweight prospect Delante “Tiger” Johnson made short work of Agustin Gerbaldo Kucharski, stopping him in the third round of a six-round bout. Johnson (4-0, 3 KOs), a member of the 2020 USA Olympic Team from Cleveland, Ohio, dropped Kucharski (8-5-1, 3 KOs) twice in the third to score the TKO 3 victory.

Other undercard results as follows:

Carlos Balderas improved to 13-1 (11 KOs) with a unanimous decision win over Ruben Cervera (13-3, 11 KOs) in a six-round junior lightweight bout.