Teofimo Lopez pulls off the shocker by dominating Vasiliy Lomachenko 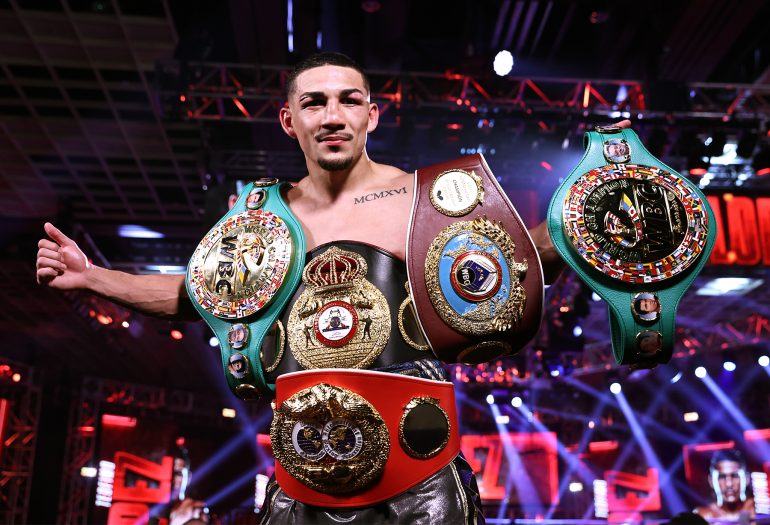 Teofimo is the man at 135 pounds and now considered one of the 10 best boxers, pound for pound, by Ring Magazine.
17
Oct
by Joseph Santoliquito

Teofimo Lopez promised ‘a takeover.’ He screamed from the boxing mountain tops to anyone willing to listen that he was going to do something no one else thought he could do: Beat the untouchable Vasiliy Lomachenko.

Lopez called Lomachenko “a diva.” He mocked “Hi-Tech,” saying he was too old; too small to hurt him. He sneered at Lomachenko’s ability, that this complex riddle, this human knuckleball can be hit.

Then “The Takeover” took over.

Teofimo “Takeover” Lopez placed himself on boxing’s pantheon with a resounding unanimous 12-round decision over Lomachenko, becoming at 23 the youngest four-belt title holder in boxing history Saturday night at the MGM Grand in Las Vegas.

“I had to dig deep, and I thank God, and I did dig deep and it feels good,” Lopez said. “I knew he was coming. I could bang, too, I can take one to give one. You just gotta to keep pressuring him; press the gas, stick the jab and don’t really give him that opportunity to set up. And anytime he wanted to throw, I had something ready for him.

“That kind of stopped his momentum. On top of that, he was coming off a 14-month layoff. I knew it would take him a long time to catch up. I wanted to stay composed through the whole course. I wanted to keep him from throwing so many punches. What I did successfully was counter him.”

The fight went against almost everything Lomachenko does well. For the first six rounds, he looked like an old 32-year-old who was unsure of himself. He stood in front of Lopez almost the entire 12 rounds, playing right into Lopez’s punching zone. The two-time Olympic gold medalist looked tentative for the first half of the fight, giving Lopez a great deal of respect. Known for using his feet to find openings and punching from awkward angles, Lomachenko sporadically displayed the very techniques that made him one of boxing’s pound-for-pound best.

Instead, it was Lopez who patiently whittled down an unusually stationary Lomachenko the first six rounds.

“I expected more (from Lomachenko),” Lopez said. “He was pretty basic. I fought the guy who everyone said was the pound-for-pound (best). He’s going to the Hall of Fame for being a three-time (division) winner. Facing someone like him and doing what I did, you haven’t seen anything yet. I don’t fear no man. I’m in there to fight. He thought he could take me to the later rounds. He failed. I noticed with him starting to huff and puff. I was two steps ahead of him.” 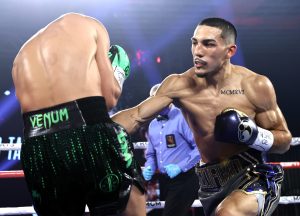 Teofimo Lopez had dominated the first portion of the fight, going to the body (Photo by Mikey Williams/Top Rank).

Lopez again was the aggressor in the third. Lomachenko seemed to be pacing himself. Lopez was more active, while Lomachenko may have been checking his levels and doing little of anything else.

The fourth round was fairly uneventful—but after four, it was easy to see Lopez ahead, 4-0.

Lopez seemed to have his left eye get a little reddish. Two-thirds into the fifth round, Lopez had thrown 174 punches to Lomachenko’s 40.

Into the sixth, Lopez’s confidence was growing. He finished the sixth with a right uppercut to Lomachenko’s chest. After six, Lopez appeared to be throwing a shutout.

“I think in the first half of the fight, he got more rounds than I did, but in the second half of the fight, I took it over and I was that much better,” Lomachenko said. “I want to go home and see what I can do better. I’m definitely not agreeing with the scorecards. I thought I won the fight, but the results are the results, and I’m not going to argue it right now.

After the seventh, Teofimo Lopez Sr. could be heard saying, “It’s a blowout; told you!”

Sensing he was behind, Lomachenko fought with more urgency in the eighth. Lomachenko attacked with the jab, then followed with two lefts to Lopez’s face, forcing the younger fighter back for the first time in the fight. The eighth marked the first time Lomachenko landed double-digit in punches, connecting on 19/38.

In the last 10 seconds of the ninth, Lomachenko closed with a straight left to the chest. Between the ninth and the 10th, Anatoliy Lomachenko told his son to keep the combinations coming.

Lomachenko began stepping more toward Lopez, more willing to fight in the pocket in the 10th. With :01 left in the 10th, referee Russell Mora ruled a Lopez beltline right was a low blow, and gave Lopez a warning. 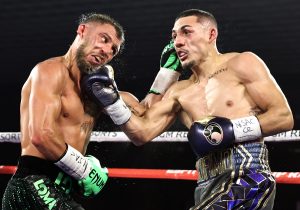 Lomachenko, feeling Lopez was slowing, went back on the attack again in the 11th. Lopez came on late in the round, but Lomachenko made it a far closer affair, staying in the pocket and landing on Lopez’s face and body. Lomachenko had his most productive round, connecting on 29/62, with 19 power punches.

Lopez started the 12th very well, landing rights to the body. With :10 left in the fight, Mora stopped the action with a cut on Lopez’s right eyelid, caused by an accidental headbutt. Lopez landed 50/98 (51%) punches in the 12th, again another major first for a Lomachenko opponent.

After the fight, Lopez walked over to Lomachenko’s corner and shook hands with the marked-up Ukrainian.

“It’s the takeover, it’s time for the new generation to come up and it was up to me to lead the way for everybody,” Lopez said. “I knew I won the fight. I outboxed him, and I beat him for most of the rounds. Loma is a hell of a fighter, he knows what he’s doing, but his time is over. There was no rematch clause for a reason. They gave me a contract on the side. Now it’s time for us to take over and move forward. Out with the old, in with the new.

“The moment I stood my ground and started pressing him back, he gave up. He literally gave up and I saw it in his eyes. I fought who people say was the pound-for-pound (best) and I outboxed him. His time is over.”