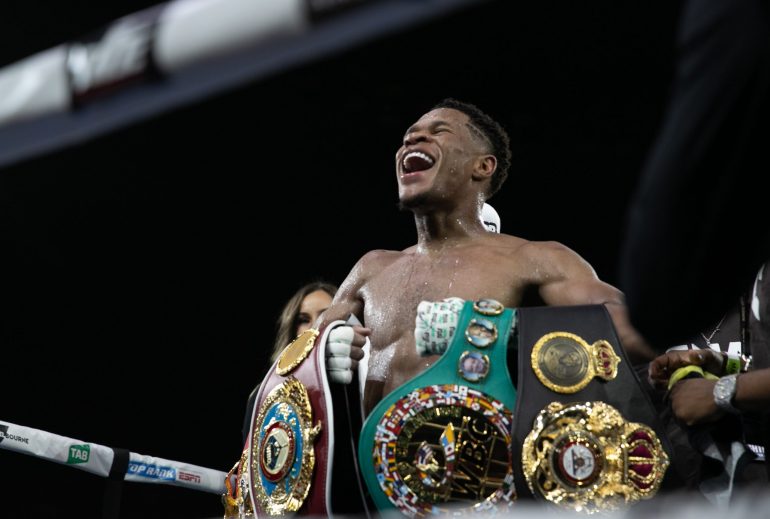 The 23-year-old from Las Vegas withstood a more spirited challenge from the former champion Kambosos, whom he had defeated in a more one-sided fight in June to win the title.

Haney (29-0, 15 knockouts) sat down more on his punches than he did in the first fight, using his right hand to dissuade the hard-charging Kambosos (20-2, 10 KOs), who had success early on switching stances and coming forward aggressively.

“When he first came out, I didn’t expect him to be switching. But I caught on to his timing and his angles, and I started to pick my shots more,” said Haney.

“He’s a warrior. I take my hat off to George Kambosos and all the Australian fans that came out. Thank you guys for giving me so much hospitality here.”

Kambosos showed his courage, but was outclassed as the fight progressed. Haney poured on the punishment in the tenth round, landing at will with the right hand as blood streamed down Kambosos’ face.

Jason Moloney punched his ticket to a third world title opportunity by defeating Nawaphon Kaikanha by unanimous decision in the co-featured bout by the scores 118-110 on two cards and 119-109 on the third in their twelve-round bantamweight bout.

The loss was the first for the Thai contender since his third round TKO loss to Juan Hernandez in 2017 for the vacant WBC flyweight title.

Moloney, 31, is now the next logical challenger for the 118-pound title held by Naoya Inoue, the unified champion who knocked out Moloney in seven rounds in 2020.

Moloney’s twin brother, Andrew, also cruised to victory on the card, defeating former title challenger Norberto Jimenez by unanimous decision. The scores were 97-90, 98-88, 98-89, all for Moloney (24-2, 19 KOs), who has now won won four straight since losing a decision in his third bout against Joshua Franco.

Jimenez (31-10-6, 16 KOs) of the Dominican Republic was dropped twice, once in the first round on a hook, and in the second on a less clear punch. He also lost a point for hitting on the break, which compounded the situation further.