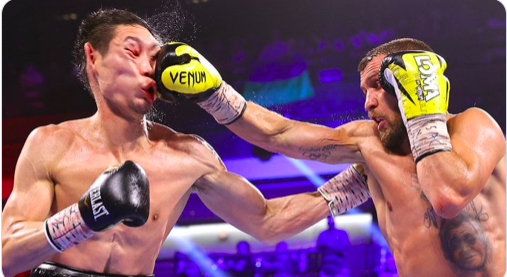 Loma's not as explosive as Tank, but he's equally punishing to his opponents.
26
Jun
by Dan Rafael

Lomachenko wanted for people to compare his performance against Nakatani on Saturday night to the one Teofimo Lopez had against him.

The result was a one-sided ninth-round knockout victory for Lomachenko in the main event of the Top Rank Boxing on ESPN+ card before a capacity crowd of 2,072 at the Virgin Hotels Las Vegas, and it was a far more dominant victory than the one his rival Lopez authored against the Japanese boxer in 2019. 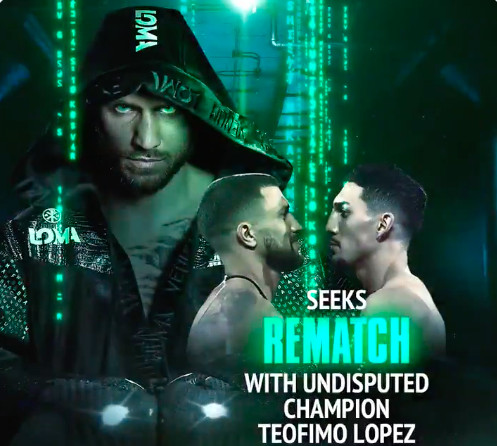 Question: After seeing how Loma looked Saturday, how do you think a Lomachenko v Teofimo rematch would play out?

Last October in Las Vegas, Lopez outpointed Lomachenko in a big upset to unify their lightweight world titles. Lomachenko, who did not have a rematch clause, had started very slowly, giving away most of the first six rounds before coming on. He had come into the fight with an injured right shoulder that required surgery for the second time a couple of days after the bout.

The taller and longer Nakatani had gone on to enhance his resume in December when he survived a pair of knockdowns and rallied for a ninth-round knockout of Felix Verdejo. But on this night Lomachenko looked like the same fighter who had ascended the pound-for-pound rankings and won world titles in three weight classes from featherweight to lightweight.

From the outset, Lomachenko, who is listed generously at 5-foot-7 and looked tiny compared to the 5-11 Nakatani, took command. He was aggressive and his hand and foot speed were dazzling, leaving Nakatani with no answers to his onslaught.

“I’m happy because I won,” Lomachenko, The Ring’s No. 1-rated lightweight, said after. “All the strategies that we developed with my team (worked). I reached all my goals. I won and now I’m back on track.”

An accidental head butt in the first round left Lomachenko with a cut on his hairline and blood dripping down his face but cutman Russ Anber kept it closed throughout the fight and it was never an issue.

With the cut under control, Lomachenko, a southpaw, did what folks have grown used to seeing from him. He peppered Nakatani with shots from all angles and landed many stiff straight left hands.

Nakatani, The Ring’s No. 9-rated lightweight, resorted to a lot of holding and grappling to keep from getting hit, but it did not work. In the fifth round Lomachenko backed Nakatnai up and landed a combination, including a right hand that dropped Nakatani. He beat the count and then the bell rang to end the round.

The 33-year-old Lomachenko (15-2, 11 KOs), the two-time Olympic gold medalist from Ukraine regarded by many as the greatest amateur boxer ever, came out fast in the sixth round and laid a beating on the loser. By the end of the round Nakatani was bleeding from the nose and from a cut over his right eye because Lomachenko had unleashed numerous shots from both hands, including a head-snapping straight left during the sustained attack. The first half of the round was especially one-sided as the crowd began chanting “Loma! Loma!”

By the end of the seventh round, Nakatani’s right eye was severely swollen in the same area that had previously been broken.

Lomachenko rocked him repeatedly with clean left hands in the ninth round. It was so one-sided that Nakatani (19-2, 13 KOs), 32, of Japan, was staggering on jelly legs and seemed on the verge of going down multiple times. Finally, when Lomachenko hammered him with another series of punches near the ropes, referee Celestino Ruiz stepped in to wave it off at 1 minute, 48 seconds and then caught Nakatani as he was falling to the canvas.

At the time of the stoppage Lomachenko led 80-71 on two scorecards and 78-83 on the third.

Lomachenko’s dominance was illustrated in the CompuBox punch statistics. He landed 104 of 214 punches (49 percent) while Nakatani connected with just 29 of 250 blows (12 percent).

Lomachenko answered any questions about what he had left after the shock loss to Lopez. It sure seemed like he had a lot left, and now he wants the rematch with Lopez (16-0, 12 KOs), 23, who struggled in a unanimous decision win against Nakatani in their July 2019 world title elimination bout. 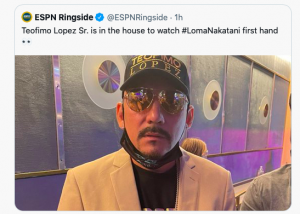 “Everybody saw how I won this fight, and everybody is waiting for the rematch (with Lopez), so let’s make a rematch,” said Lomachenko, who was fighting in only the second non-title bout of his professional career.

It’s a fight Top Rank chairman Bob Arum, who promotes Lopez and Lomachenko, would like to make

“In case there was any doubt, Lomachenko proved he is still one of the very best fighters in the world,” Arum said. “He is healthy and ready to fight any of the lightweights.”

Teofimo Lopez Sr., Lopez’s father and trainer, was ringside and told ESPN’s Bernardo Osuna during the broadcast that they were open to a sequel, when previously they were not. But he had one stipulation.

He said his son will face mandatory challenger George Kambosos Jr. (19-0, 10 KOs), of Australia, next — later this year — in a fight that was supposed to have taken place June 19 but was postponed because Lopez came down with Covid-19. Lopez Sr. said if his son defeats Kambosos, he will grant Lomachenko the rematch, but it has to be the next fight after Kambosos because his son then is going to move up to junior welterweight.

“He has a fight in the future with Kambosos, but how about after, in the beginning of next year. December, January, February, I am waiting,” Lomachenko said. “I’m happy about this if they are ready to give me a rematch after all I’ve done, after this fight. I am happy about this opportunity.”