Miguel Berchelt shows us another side of himself: Weekend Review 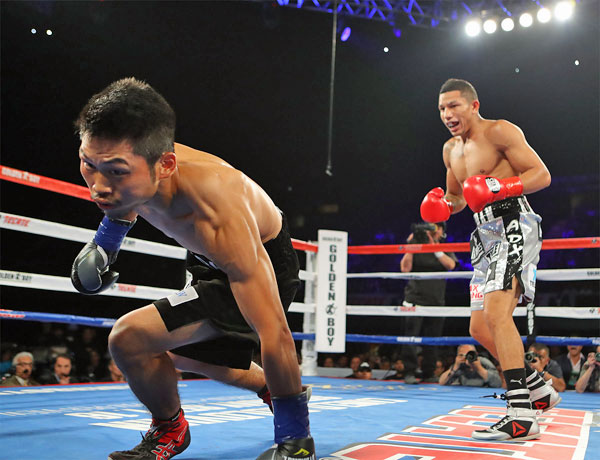 Miguel Berchelt: On paper, Berchelt vs. Takashi Miura looked like a can’t-miss brawl but Berchelt didn’t see the point.

The Mexican knew that his Japanese counterpart, a tough, but limited boxer, couldn’t match his skills so he decided to throw everyone – Miura included – a curve: He boxed. The result was a dominating performance by Berchelt and a frustrating night for the loser on Saturday at the Forum in Inglewood, California.

Berchelt (31-1, 28 knockouts) boxed circles around Miura, picked his spots to unload, regularly beat his hopeless foe to the punch and won round after round in commanding fashion.

It might’ve been the best performance of Berchelt’s career even though the fans didn’t get their war.

“I know he only can go forward,” said Berchelt, who planned all along was to use brains over brawn. “I can go forward but I can also box. I showed that I’m a much better boxer than he is.”

Berchelt, only 25, has come a long way in a short time. The resident of Merida, in the Yucatan region, was a good amateur by Mexican standards and developed a reputation as a big puncher as a pro.

He hadn’t gone the distance in the 18 fights that preceded Miura, including a stoppage loss to Luis Florez in 2014.

However, because he had fought almost exclusively in Mexico, he was not widely known until he met then-WBC 130-pound titleholder Francisco Vargas – Miura’s conqueror – and won a tightly contested war of attrition to claim the title in January.

That brutal encounter and Miura’s reputation as a take-no-prisoners warrior had fans salivating over the Berchelt-Miura fight. And that’s why Berchelt’s tactics were so surprising.

“The Scorpion” had proven time and again that he could stand toe-to-toe and beat you up, as his high knockout percentage indicates. Then he demonstrated against Miura that he could win in a different way, leading us to believe that he is even better than we thought.

Berchelt is now arguably the best 130-pounder in the world not named Vasyl Lomachenko.

Sullivan Barrera: The Cuban defector would’ve been classified as a winner here even if he suffered a first-round knockout loss.

The affable 175-pound contender was reunited with his father, Rafael, eight years after he left his family behind in his native country to seek fame and fortune in boxing after the elder Barrera was finally able to procure a visa. Rafael was asked a few days before his son faced Joe Smith Jr. on the Berchelt-Miura card what their first meeting at Miami International Airport was like.

He smiled, gave his son a bear hug and said simply: “The emotion is unexplainable.”

Barrera’s impressive victory over Smith in a 10-round light heavyweight fight was a nice bonus, particularly with Rafael watching from a few feet away. Barrera went down – as he’s prone to do – in the first round but otherwise neutralized Smith’s punching power and exposed his limitations by outboxing and outworking him.

Dad must’ve been bursting with pride.

The victory puts Barrera (20-1, 14 KOs) in a strong position. He and has team have set their sights on promotional stablemate Sergey Kovalev, the former titleholder who lost to Andre Ward in June. If Barrera gets that fight and wins, his first title shot should come soon afterward.

And Kovalev would be wise to take the fight. A victory over Barrera, whose image was enhanced Saturday, would be a strong step in the right direction after back-to-back losses to Ward.

If Barrera-Kovalev doesn’t work out, there are other intriguing matchups for both of them in a strong division. Of course, the most attractive opponent would be WBC titleholder Adonis Stevenson but the 39-year-old Haitian-Canadian is never in a hurry to face a real challenge.

Smith? The union laborer from Long Island might’ve hit his ceiling. His power served him well against Andrzej Fonfara and Bernard Hopkins but he didn’t have the ability to adjust when it was difficult to land big shots against Barrera.

Of course, an injury apparently played a role in his performance. Smith wrote on his Facebook page that his jaw was broken in the second round of the fight, an injury he said was confirmed by x-rays. That would mean he fought in great pain for eight-plus rounds. If the jaw was broken, he gave a courageous performance.

Robert Guerrero: Watching what might be the final few minutes of Guerrero’s career was difficult. At the same time, that was the only way he was going to go out: on his shield.

“The Ghost” hit the canvas five times against Omar Figueroa (27-0-1, 19 KOs) before referee Ron Lipton decided enough was enough and stopped the fight midway through the third round Saturday in Uniondale, New York.

He has now lost his last three fights and five of his last seven, an ominous sign that it might be time to move on at 34.

If that was his final fight, it’s a good time to look back and appreciate one of the better fighters in recent years.

Guerrero (33-6-1, 18 KOs) faced a number of unusual obstacles. He battled several years of his career as his wife battled cancer, a challenging distraction. He was called a “quitter” by some when he suffered a cut against Daud Yordan, told the referee the blood was impairing his vision and the fight was stopped, a perception he refuted many times over. And he battled injuries.

In spite of all that, he won three major titles in two divisions and had success in two more. He was 5-3 in title fights (with one no-contest) after starting 5-0. He was 8-3 if you count “interim” titles, which THE RING doesn’t.

Among his victims: Joel Casamayor, Vicente Escobedo, Michael Katsidis and Andre Berto, the last victory coming after he jumped directly from 135 pounds to 147.

Guerrero was 33-1-1 when he agreed to fight Floyd Mayweather Jr. in 2013, which was the beginning of his decline. He managed to win three rounds on all cards but was outclassed. He went on to lose to Keith Thurman, Danny Garcia, David Peralta and now Figueroa.

I’ll remember him as an underappreciated boxer with strong will and tremendous resilience. In other words, he was a warrior with elite skills, which is why he remained a top fighter for more than a decade.

A lot of people were amused by the Floyd Mayweather Jr.–Conor McGregor press tour, with soundbites (some with bleeped-out words) all over sports television and radio. Some even suggested the fighters deserve credit for knowing how to sell a fight. Seriously? This is entertaining? And the fighters deserve credit for using racist, homophobic, otherwise vile language in an attempt to fool the public into believing their farce is a real fight in a blatant money-grab? Mayweather and McGregor shouldn’t be applauded. … WBA 130-pound titleholder Jezreel Corrales and challenger Robinson Castellanos gave us the best fight among those on HBO even though it was shortened by a cut. Corrales (22-1, 8 KOs) survived two knockdowns in the fourth round to defeat Castellanos (24-13, 14 KOs) by a majority technical decision. The fight was stopped during the 10th round when Castellanos suffered a deep cut below his right eye, the result of an accidental head-butt. That sent the fight to the scorecards. Corrales won 94-93, 96-92 and 94-94. The Panamanian is a slick boxer and an excellent athlete but has little punching power. I don’t think his ceiling is high. Castellanos is as good as any 24-13 fighter you’ll see, although he also is limited. He has solid skills and fights with determination. … Junior lightweight/lightweight prospect Ryan Garcia’s 74-second knockout of journeyman Mario Macias (28-22, 14 KOs) on the Berchelt-Miura card didn’t mean much given Macias’ limitations but keep an eye on that kid. Garcia (10-0, 9 KOs) is talented and, just as important, exciting. …

Chris Eubank Jr. (25-1, 19 KOs) easily outpointed Arthur Abraham on Saturday in London to earn his ticket into the World Boxing Super Series. He figures to beat Avni Yildirim of Turkey in the first round, which should set up an all-U.K. showdown with George Groves. Then we’ll know how good Eubank really is. … Abraham (46-6, 30 KOs) can no longer compete with a good boxer. He was shut out against Gilberto Ramirez in April of last year and won only two rounds on two cards (none on the third) against Eubank. The former two-division titleholder, now 37, might want to call it a career. … We all feel for Lee Selby. The IBF featherweight titleholder fought Jonathan Victor Barros only four days after his mother died, which must’ve been enormously difficult. And I thought back to January, when Selby was originally scheduled to fight Barros on the Carl Frampton–Leo Santa Cruz II card – his Las Vegas debut – only to learn the day before that the fight was canceled because Barros failed medical tests. He was devastated. Selby (25-1, 9 KOs) easily outpointed Barros (41-5-1, 22 KOs) on Saturday on the Eubank-Abraham card to set up a possible fight with Frampton. For Selby’s sake, let’s hope he gets that fight and has happier times ahead. …

Figueroa couldn’t be more pleased than he was after his victory over Guerrero on Saturday night. The former lightweight titleholder spent 19 months away from boxing – which allowed time for his chronically injured hands to heal – and he looked it. He made the welterweight limit but looked pudgy. In the end, that didn’t matter. He found more than enough fire to hand his opponent a bad beating, a good first step back. Figueroa is only 27. He should be back at full strength soon, which might not be good news for those in and around his weight.