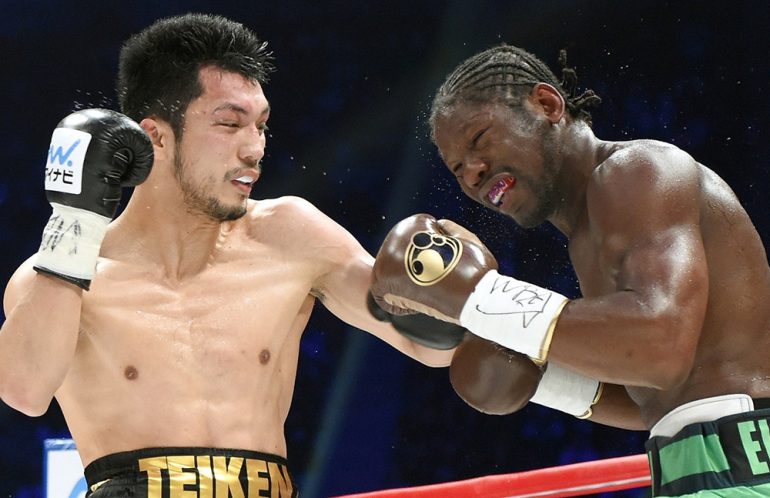 N'Dam (right) in action against Ryota Murata. Photo by Naoki Fukuda
20
May
by Ryan Songalia

The result of Saturday’s fight between Hassan N’Dam and Ryota Murata was so dubious that even WBA president Gilberto Mendoza felt “embarrassed.”

Two judges, Gustavo Padilla of Panama and Hubert Earle of Canada, saw what virtually no one else saw — N’Dam handing Murata his first defeat at Ariake Colosseum in Tokyo, Japan. They turned in scorecards of 116-111 and 115-112 respectively for N’Dam, awarding the France-based Cameroonian a split decision victory and the WBA “regular” middleweight belt, which THE RING does not recognize as a legitimate world title next to Gennady Golovkin’s WBA “super” title.

The third judge, Raul Caiz Sr., saw the fight completely the opposite way, scoring it 117-110 for Murata, the 2012 Olympic middleweight gold medalist. The result triggered an immediate reaction on social media, where it was widely derided as a robbery.

“I feel embarrassed when this happens. We spend a lot of time in the training and certification,” Mendoza tweeted afterward.

When the decision was announced, N’Dam fell to his knees in ecstasy while Murata turned away disgusted. Even French commentators on Canal+ had the fight scored for Murata, with the TV judge having it 88-82 after the ninth.

Murata (12-1, 9 knockouts) gave away the first two rounds to the jabbing and moving N’Dam (36-2, 21 KOs), and was still a step behind in the third round as N’Dam avoided lingering in front of Murata. That all changed in the fourth round when, in the final 30 seconds of the round, a Murata right hand beat N’Dam to the punch as he stopped to throw his own right and folded N’Dam inside-out.

N’Dam rose to his feet but was still affected by the punch, and after a few more right hands stumbled forward to the canvas for what referee Luis Pabon ruled a slip. N’Dam returned to boxing in the fifth and tried to land wide, overhand rights to get respect from Murata, but ended up getting hit with power shots in return. A straight right hand drilled N’Dam, and another sent N’Dam into the ropes for what was again a missed knockdown call by Pabon.

Right hands would cause similar situations in Rounds 6 and 7, as every significant punch produced a wobble from N’Dam and propelled him to the ropes, which could have also been grounds for knockdown rulings.

The remainder of the fight had a similar pattern, with Murata stalking and landing hard rights while N’Dam moved, held and occasionally flurried back. The two judges who scored the fight for N’Dam gave him each of the final five rounds, while the judge who had it for Murata gave Murata each round from the ninth onward.

Mendoza tweeted that he would “have a decision on this bout next week.” The decision springs N’Dam back to relevance, as he’s now won five straight (with an inauspicious run at the 2016 Olympics thrown in there).

The result brought a bittersweet end to what had been an outstanding day for Japanese boxing, with Kosei Tanaka retaining the WBO junior flyweight title by decision and Ken Shiro outpointing Ganigan Lopez for the WBC version of the belt, giving Japan a monopoly on the 108-pound division. The day also saw Daigo Higa obliterate Juan Hernandez to win the WBC flyweight title.