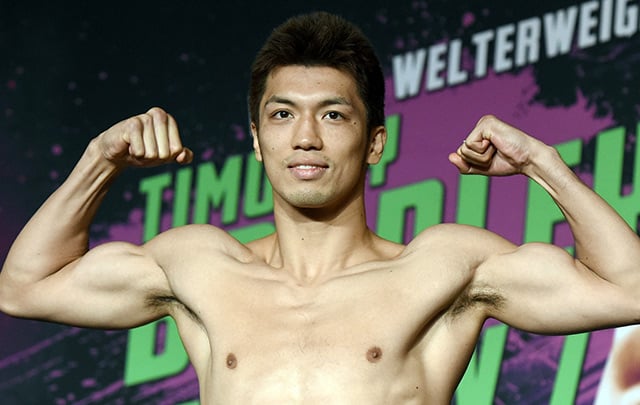 In a country where baseball exports like Ichiro Suzuki and Masahiro Tanaka garner most of the headlines, the exploits of Japan’s boxers, who typically compete in the sport’s lightest weights, often fly under the radar.

That’s something Ryota Murata is hoping to change.

Murata, who is listed at nearly 6-feet tall, won the middleweight gold at the 2012 Olympics, becoming the first Japanese boxer to win a medal in a category higher than bantamweight, and the first boxing gold medalist from Japan since Takao Sakurai took the bantamweight gold in 1964.

Now an unbeaten pro at 10-0 (7 knockouts), the 30-year-old Murata will bring his talents to Las Vegas for the second time on Saturday as he faces George Tahdooahnippah (34-2-3, 24 KOs) in a 10-round bout on the untelevised portion of the Terence Crawford-Viktor Postol junior welterweight title unification bout at the MGM Grand. And though his fight is off-television, at least a handful of Japanese media outlets have sent reporters to cover Murata’s fight.

Murata is hoping his performance against the most experienced fighter he’s faced so far will earn him media mileage despite being off-TV in the United States.

“It depends on what my opponent does but I usually try to do my best to put on a good show,” Murata tells RingTV.com through an interpreter in a phone interview. Murata, who hails from Nara, which is a 30-minute drive from Osaka, Japan, is respectful of his opponent, the 37-year-old known as “Comanche Boy,” who is fighting outside of his native Oklahoma for just fourth time in his 12-year career.

“I saw his videos. He’s got a lot of experience and he’s a very tough fighter,” says Murata of Tahdooahnippah, whose two losses were by stoppage to Patrick Nielsen and Delvin Rodriguez.

Murata’s size, as well as his heavy right hands, attracted interest from promoters after he defeated Esquiva Falcao in the London Games final but he wasn’t initially keen on continuing with the sport. He told Reuters in the immediate aftermath that winning the gold was “the end of a chapter for me and boxing” and reportedly turned down a $1 million contract to turn professional.

He changed his mind and signed with Japanese outfit Teiken Promotions and the Las Vegas-based Top Rank Promotions, which quickly scooped up a number of international Olympians, including China’s Zou Shiming, Ukraine’s Vasyl Lomachenko and silver medalist Falcao. He’s faced a capable array of foes in his first 10 fights, compiling 61 rounds against opponents with a combined record of 188-47-10, and says his toughest foe so far has been Adrian “Tyson” Luna Flores, whom he beat by a 10-round decision in his fifth fight.

Another tough opponent for Murata was Gunnar Jackson, who found his way through Murata’s guard with right hands in a distance-lasting effort on the Brandon Rios-Timothy Bradley card in his first Vegas outing last November.

Murata, who has been fighting in 10-round fights since his fourth bout, says he’s ready for the top fighters at middleweight now, with Top Rank boss Bob Arum telling reporter Steve Kim in May that he expected Murata to fight one more time in Japan after Tahdooahnippah, then target a showdown with WBO middleweight titleholder Billy Joe Saunders in the United Kingdom.

“I’m ready as long as they’re able to take me on. If the fans want me to, I’m ready to go any time,” Murata says of the division’s elite, which includes IBF/WBA/WBC titlist Gennady Golovkin, RING champion Saul Alvarez and Saunders.

Murata’s trainer Sendai Tanaka, who has worked to make the right hand-happy Murata a more versatile fighter since taking over before his third fight, thinks a championship win for Murata would usher in a new era of popularity for boxing in Japan.

“A fighter like Murata, if he becomes a champion, he will increase the popularity of the sport,” said Tanaka, whose training credits include Marco Antonio Barrera, Roman Gonzalez and Edwin Valero.

So far, Murata’s gold medal win and early pro success have earned him high-profile sponsorships from Nike and NTT Docomo, the largest mobile phone operator in Japan. Could Murata one day make his way from the undercard to the main event in Vegas? 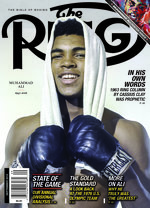