Tua is the only active fighter on this list (the 40-year-old bomber is scheduled to fight Alexander Ustinov in New Zealand Aug. 31 following a two-year layoff) and the guess here is that the plan to beat his 6-foot-7¾

inch opponent will heavily involve his searing left hook, which, at its very best, was astonishingly fast, succinct and explosive.

“When I throw that left hook, and when that left hook finds home, I sense fear, I taste blood and I taste victory,” a quietly menacing Tua said in a Sky Sports interview shortly before he fought lineal heavyweight champion Lennox Lewis in 2000. The source of his incredible impact with the hook lies in his tree-trunk physique, the extraordinary snap with which he throws it and his ability to maintain his balance throughout the process. Also, the power of Tua’s hook remains with him from first bell to last, which makes him an extremely dangerous proposition. Thirty of Tua’s 43 knockouts took place within the first three rounds, including his 19-second demolition of future titlist John Ruiz. In that fight, a monstrous hook in the opening moments hurt “The Quiet Man” while two more were included in the flurry that finished him off.

On the other end of the scale, a pair of hooks in the 11th round broke open, then closed the door on future 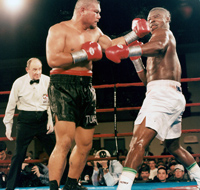 belt-holder Oleg Maskaev in their April 1997 showdown while a massive, neck-wrenching hook stopped David Izon in the 12th and final round of their December 1996 meeting. Besides all the early knockouts and the four that occurred in the double-digits rounds, Tua collected nine more between rounds four through nine. That is the mark of a true knockout artist, for Tua can still score stoppages even if his opponents manage to get through the early stages.

His hook is the centerpiece of several YouTube tribute videos, each of which offer substantial evidence for his inclusion on anyone’s list of best left hookers. That punch, and the wreckage that followed, more than speaks for itself.