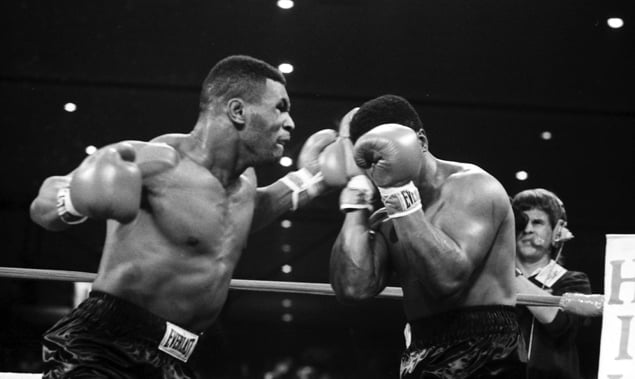 Mike Tyson throws a hook against Trevor Berbick during his WBC heavyweight title-winning bout at Las Vegas Hilton on Nov. 22, 1986 in Las Vegas, Nev. Tyson floored Berbick three times with one left hook to the temple, stopping the defending beltholder in the second round.

“When delivered properly, the left hook is the most devastating punch in boxing.”

Floyd Patterson’s experience fueled the words he penned in “Basic Boxing Skills: A Step-by-Step Illustrated Introduction to the Sweet Science,” which he co-wrote with Bert Randolph Sugar in 1974. Patterson’s left hook produced many of the 40 knockouts he scored during his 20-year Hall of Fame career and his most famous example was the leaping left hand that not only flattened Ingemar Johansson in their second of three fights but also enabled him to blast through a historic barrier. His sensational fifth-round KO earned Patterson the distinction of being the first man ever to regain the undisputed heavyweight championship. Many have equaled and surpassed Patterson’s feat in the 53 years since, but none can ever say they were the first. 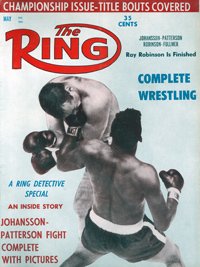 “It takes a lot of practice to deliver this punch with power, but it is well worth it,” Patterson continued. “Starting from the basic stance position, lean slightly forward and to the left, placing your weight on your left foot. Keeping your left elbow and arm in close to your body, turn your left hip and shoulder to the right. Keep your fist turned inward, laces inside and thumb up. Step forward, shifting your weight from your right foot to your left as you throw or whip the punch, raising your elbow about four inches. The left hook should be delivered in either an upward or level swing, depending on whether you are delivering the punch to the head or the body.”

Almost every right-handed fighter is taught how to throw the left hook and they applied many of the principles Patterson outlined. But like everything else in life, a select few proved themselves to be exceptionally gifted. For whatever reasons, these special fighters produced jaw-dropping – and sometimes jaw-breaking – results that defy complete explanation. All we as observers can do is appreciate the final result.

Dozens, if not hundreds, of fighters throughout history have showcased their gifted hooks and a few dozen can legitimately claim to own one of the 10 best in history. The honorable mention list at the end of this article illustrates just how difficult and limiting filling 10 slots can be. But the tough choices eventually were made and the following is one man’s opinion of the top 10 most destructive left hooks of all time in terms of body of work and explosive impact. 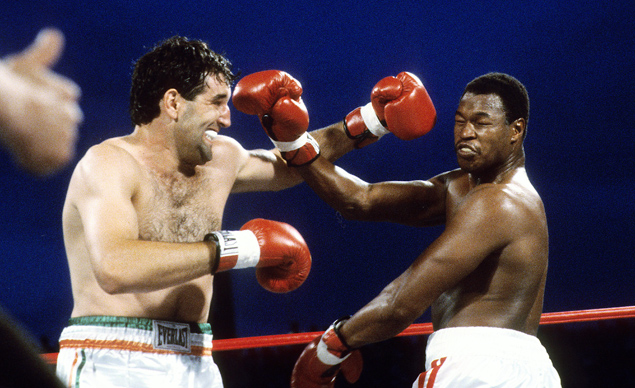 During the late 1970s and early 1980s, this 6-foot-6, 225-pound New Yorker left a trail of prostrate bodies thanks to one of the most lethal left hooks ever thrown. His critics will point out the careful matchmaking his promotional team employed during his rise to prominence, but those nay-sayers must also concede that Cooney’s highlight reel was, and remains, awe-inspiring.

A natural left-hander, Cooney fought in the right-handed stance to bring his massive left a few inches closer to the 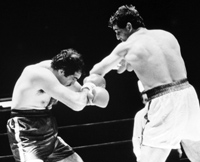 target. Cooney vaulted onto the world scene in November 1979 when he met the 35-2-1 John “Dino” Denis at Madison Square Garden in a classic grudge fight. A crisp, compact hook to the jaw dropped Denis like a shot and though he managed to arise, referee Tony Perez stopped the fight after taking one look at Denis’ bloody face and hazy eyes. To that point only George Foreman had scored a stoppage win over Denis, so Cooney’s smashing victory caused many to take notice.

Three fights later a crunching hook broke Ron Lyle’s ribs and produced a first-round stoppage. Six months after that “Gentleman Gerry” produced his most memorable knockout against Ken Norton, who, like Lyle, was past his best days. In the final moments of their turbulent 54-second encounter, Cooney connected with a hook that froze Norton against the corner pad, after which he landed four more frightfully flush punches to Norton’s unprotected skull. When referee Tony Perez finally pulled Cooney away, the wide-eyed semi-conscious look on Norton’s face said it all in terms of what had just hit him. The chilling TKO broke Lee Savold’s 33-year-old record for the quickest knockout in a Madison Square Garden main event and it represented the zenith of Cooney’s career.

Cooney went on to go 3-3 in his final six fights and, fittingly, they all ended inside the distance. Although Cooney didn’t reach the heights he, his team or his fans wanted, his reputation for owning one of boxing’s most formidable weapons remains safe for all time.

(Click on the NEXT button at the lower right part of the screen to read Nos. 9 through 1)