Standing 6-feet-3 and owning an albatross-like 79-inch reach, the rail-thin Foster had the build of a lean and lithe boxer but his fists told a far more terrifying story. Simply put, he remains near the top of any list of power-punching light heavyweights because he demolished his rivals so emphatically, especially with his left hook. One would have thought that Foster’s long arms would inhibit his ability to maximize his power at close range but the reality, as his victims would tell you, was quite different. 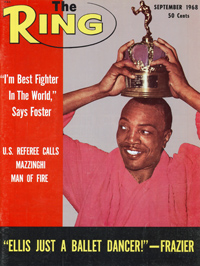 In retrospect, it was appropriate that Foster would later become a sheriff because he certainly laid down the law inside the ring by executing a most brutal form of justice. He produced two of the most destructive one-punch knockouts in light heavyweight title annals against Dick Tiger and Mike Quarry, both courtesy of monstrous, concussive fourth-round hooks.

The hook against Tiger was the final punch of a wild mid-ring exchange. It slammed against the side of Tiger’s head, caused the Nigerian’s body to fall backward and his head to bounce off the mat two times before coming to rest on his back. The woozy Tiger could only crane his head upward by the time the count was finished and just like that, the title had changed hands. Tiger’s only other KO defeat in 82 fights took place 15 years and four days earlier against Tommy West, so Foster’s feat was quite impressive.

The Quarry KO was even more savage and its aftereffects more severe. As the fourth round was winding down both men wound up right crosses — both of which missed — followed by an exchange of left hooks, with Foster’s connecting with ferocious impact. Quarry collapsed to the canvas in sections before coming to a spread-eagled position. The younger brother of Jerry Quarry finally began to stir when smelling salts were administered a minute later. It would be several more minutes before Quarry would be able to leave the ring and allow the next fight — big brother’s second fight with Muhammad Ali — to begin.

There were more hook-fueled KOs in Foster’s career — the double hook that unified the title against Vicente Rondon being one example — but the Quarry and Tiger fights serve as his ticket to entry on this list, and most everyone else’s regarding boxing’s best left-hook artists.