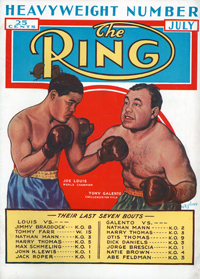 watch video of “The Brown Bomber.” Though Louis began his career nearly 80 years ago, his delivery system remains state-of-the-art. His jabs were straight from the shoulder while his right crosses and body shots were crisp and free of excess movement. Each blow was impeccably timed and fired with a quiet violence.

But as picturesque as the rest of Louis’ punches were, his left hooks were the most exquisite. With the notable exception of the uppercut, the hook is one of the most difficult to throw correctly, but the crux of Louis’ genius is that he made the toughest techniques look effortless. His hair-trigger hooks carried extreme power despite impossibly short flight paths and they produced results whether thrown singly (as was the case against Tony Galento and Primo Carnera), in bouquets of three or four (as he did against Max Baer) or as part of a finishing combination (as he did in his rematch with Billy Conn and against Tami Mauriello).

The complete package Louis owned led to still-standing records in terms of time spent as champion (11 years, 8 months) and title defenses (25) and one can’t dispute that the hook played a major role in crafting his unparalleled place in lore.