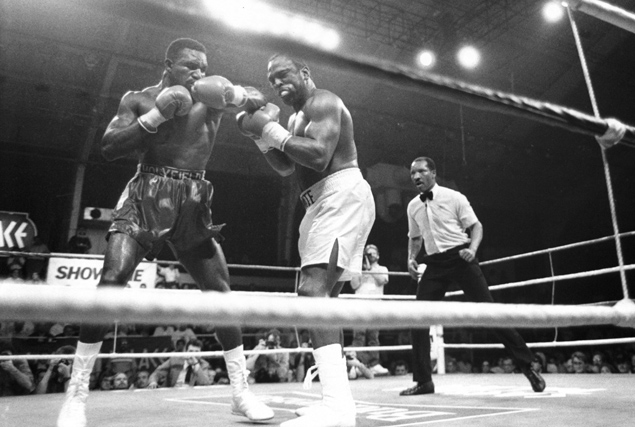 For most of his career, “The Real Deal” was a normal-sized athlete that not only competed amongst giants but also thrived against them. The foundation for his unprecedented success at heavyweight – he is the only man to capture major belts on four separate occasions – was a howitzer hook that knocked down and took out the best of an excellent generation.

A pair of hooks persuaded Ray Mercer, he of the legendarily granite chin, to take a knee in round eight of their May 1995 bout. Another short hook to the jaw in round six paved the way for Holyfield’s earth-shaking upset of Mike Tyson in their first fight in November 1996, and several more hooks highlighted the 11th round flurry that prompted referee Mitch Halpern to stop the fight. A huge hook anesthetized Michael Dokes moments before Holyfield scorched him in the 10th round of their classic 1989 clash and other big men who fell before Holyfield’s 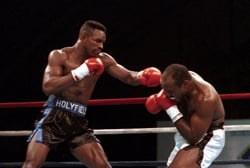 thunderous left include Seamus McDonough and Michael Moorer. Even in a losing effort against Riddick Bowe in their rubber match, Holyfield’s out-of-the-blue hook early in round six floored the 240-pound “Big Daddy.” Had Holyfield not throttled down dramatically, he might have been able to finish the job against his stricken rival.

The hook also worked wonderfully during Holyfield’s cruiserweight days. A left to the jaw scored the first knockdown in round four of his rematch with Dwight Muhammad Qawi, which ended moments later with a head-twisting right that left Qawi on his face. A savage hook to the chin persuaded referee John Coyle to stop the Ossie Ocasio fight in round 11 and a triple hook produced the final knockdown of Henry Tillman in a rare title fight involving Olympic teammates.

But all in all, Holyfield is on this list because of his deeds at heavyweight. Holyfield has always been about overcoming long odds and his mighty left hand enabled him, more often than not, to beat them.