One glance at his physique reveals why Tyson was nicknamed “Iron Mike” but the reason why his star shone so brightly was that he personified the scientific truth behind “speed is power.” His chiseled upper body was hardly muscle-bound, for at age 19 he was capable of throwing four power punches on a heavy bag in less than a second. And his most imposing weapon in a power-laden arsenal was a hook that blended thunderous power with lightning-like rapidity.

It didn’t matter how Tyson’s hook was delivered – short and sweet, wide and sweeping or even from a squared up stance – the final outcome was always the same: Lights out. The left hook was responsible for most of the 19 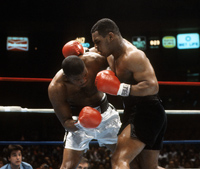 straight knockouts he strung together at the beginning of his career, but of the one-punch knockdowns that defined him, especially early on, one particularly stands out.

On June 13, 1986, just 24 days after decisioning Mitch “Blood” Green at Madison Square Garden – his second consecutive route going effort – Tyson returned to the Garden to face Reggie Gross. Gross tried his best to test Tyson and at one point he unleashed 19 consecutive punches, a scenario Tyson had not yet faced thus far. The young power-puncher handled the situation beautifully by rolling his upper body to avoid most of the punches, then springing up behind a single crushing hook to the chin. It wasn’t the final blow – Gross arose at six but was put away a few seconds later – but that punch symbolized why Tyson’s rise was so magical to those who lived through that time.

Tyson’s second-round TKO over Trevor Berbick to win his first title belt resulted from a short hook to the temple that produced not one, not two, but three knockdowns. Berbick’s equilibrium was so scrambled by Tyson’s blow 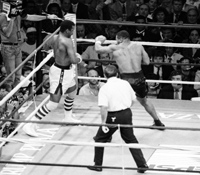 that his legs couldn’t obey his heart’s command to get up and stay up. A fantastic barrage that included three massively flush hooks to Pinklon Thomas’ chin was among Tyson’s best finishes, and the quasi hook-uppercut that scored the first knockdown of Michael Spinks in their June 1988 superfight remains cringe-worthy for those who view it.

The vast majority of Tyson’s 44 knockouts could be credited to Tyson’s awesome left and the memories they created still resonate decades after they first landed. Some casual fans still believe Tyson holds a heavyweight belt and considering the tight grip he still has on the sports world, one can fairly say that he remains, in a collective sense, the heavyweight champion of the mind.