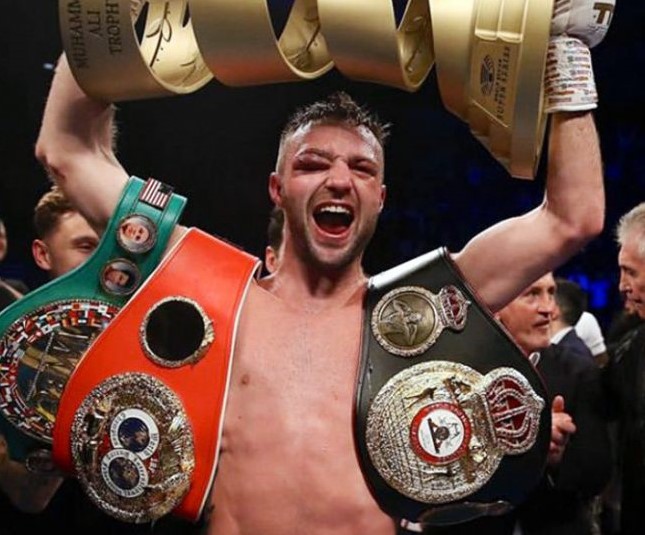 The glint of sunlight pouring through the classroom window never offered much solace to the slight kid walking through the school halls. He hardly noticed. He didn’t look up much, either. Looking up meant other kids would see. Keeping his head down meant they wouldn’t. As a self-conscious 10-year-old, he could go about his day without hearing it, being a playfully cheeky kid.

Though eventually, Josh Taylor would hear—“scarface!”—from some ignorant boy trying to be funny.

An instant later, the same boy’s back would be pressed against the cold tile school room floor crying for help, because the tiny kid with the pronounced scar on his left cheek was beating the hell out of him.

Jose Ramirez (26-0, 17 knockouts) doesn’t know it, no one watching the megafight will know it, but three people will be fighting for the undisputed junior welterweight world championship on Saturday night at the Virgin Hotels in Las Vegas: Ramirez, the WBC/WBO junior welterweight titlist, Taylor, the Ring Magazine champion and IBF/WBA beltholder, and the most furious one of them all, 10-year-old “Scarface.”

“I’ve been a fighter since I was a very, very young kid and I’ve always been a fighter, with an abundant desire to win,” Taylor said. “The main name I was called was ‘scarface,’ and I f—g hated it. I used to flip out. I would get taunted with it all of the time. Other kids would degrade me about the way I looked.

“Kids would do it to embarrass me in front of other people. I am a fighter, but I didn’t like confrontation as a kid. I never liked arguing with people, and would go out of my way to avoid it. When I had no other alternative, I would explode. 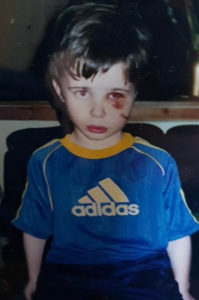 “I never started a fight in my life. I never picked on anyone in my life, because I knew what that was like. I was the one who was always the target. But when Jose Ramirez faces me on May 22, he’s going to be in there with me—and with ‘little, 10-year-old scarface.’ That little terrier will be there with me until the day I die.”

Small for his age during his formative years, Taylor suffered a horrific injury when he was 10. He was teaching his cousin Sarah how to play golf at a local park. On her follow through, she caught Taylor standing right behind her on the left side of his face with the head of a custom-made golf club their grandfather made them.

It caused a gaping cut spurting blood everywhere, but, Taylor noted, he was never knocked down. That’s right, what was equivalent to a wooden mallet attached to a steel rod couldn’t knock over 10-year-old Josh Taylor. However, the nasty cut required 90 stitches and plastic surgery to restructure his face.

“My face was an open gash, like something in a horror movie,” Taylor recalled. “I was already insecure about my size. Then the cut.”

The cut may have cut deeper psychologically.

“I would get called ‘scarface’ and that boiled me up, and I was so insecure about my face and the way I looked, other kids would taunt and tease me,” Taylor said. “I’ve grown and it looks more like scratch on the left side of my face. But when I shave you can notice it (laughs).

“I wasn’t an angry kid. I was a very boisterous young kid, and I was also a cheeky, little chappy as well. I could wind people up (laughs). But being so small, I was too insecure. I always made sure I attacked them before they attacked me. I would shock people, because no one thought this little kid could fight.

“In time, no one picked on me anymore.”

Taylor began his boxing career at the relatively late age of 14. Raised in the rough area of the east coast of Edinburgh, Scotland, his first fight didn’t occur until he was 15, at 96 pounds.

Then he took off.

“I wasn’t scared of anybody,” he recalled.

By his seventh fight, Taylor was fighting in the Scottish championships, and soon after he was heading to the Commonwealth Games in India representing Scotland, coming back with a bronze medal when he was 17. Taylor lost the semifinal match due to a bloody nose.

“I’m an absolutely terrible loser and I was so competitive, I mean when I would play snakes and ladders as a little kid and I got beat, the whole thing would go up in the air,” he said, laughing. “I got back home and I remember telling my dad what happened. I remember him telling me what an achievement it was, considering that I was boxing two years and I came home with a bronze medal (in 2008).

“I wanted more. I thought I deserved more.”

By 2012, Taylor was fighting for Scotland in the London Olympics, where he reached the round of 16, losing to Italy’s Domenico Valentino, who “stole that fight,” Taylor said. “I went to the Commonwealth Games in 2014 and won gold there, but I felt I wasn’t going to get any breaks in the amateurs.

“I was a very sporty kid, starting with taekwondo when I was five. Then I found boxing, because I liked training. I looked at boxing as a hobby, then I discovered I was good at it. I was always in the gym, always doing something. When I found boxing, I fell in love with it.”

The scar is faded now, nowhere near as pronounced as it once was. You would have to squint to see it, though it is there, a curved line that resembles a frail smile on Taylor’s left cheek.

“That little kid inside me, that angry little kid we can call the ‘Tartan Terrier,’ and he’ll be there with me facing Ramirez,” Taylor said. “From what I know, Jose Ramirez is a good man, and a good fighter. As soon as the bell rings, I’ll have bad intentions and I’m going out to hurt him, like I’m sure Jose will have the same attitude towards me. But after the final bell rings, I wish him the best and that we both walk away healthy.

“I’m just going to be leaving with four belts.”

JOSE RAMIREZ WILL LET HIS FISTS DO HIS TALKING AGAINST JOSH TAYLOR ON SATURDAY NIGHT – THE RING (RINGTV.COM)