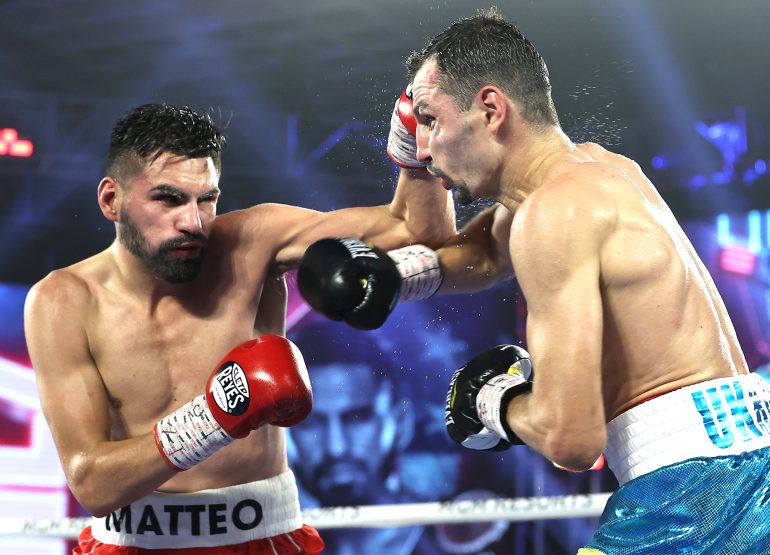 Viktor Postol and Jose Ramirez go at it in 2020. Photo by Mikey Williams/Top Rank
19
May
by Joseph Santoliquito 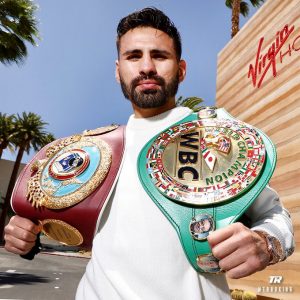 Ramirez (26-0, 17 knockouts) is a sincere straight-shooter, probably one of the most genuine guys in boxing. The 28-year-old Mexican-American doesn’t play the hyperbole game. He’s not going to go yelling and screaming into a camera or make videos showing himself slicing through sparring partners on YouTube.

He’s also been greatly underestimated and underappreciated throughout his career. His upcoming fight with the 30-year-old southpaw Taylor (17-0, 13 KOs) hasn’t carried the crossover appeal as it should.

Ramirez’s matchup against the acclaimed Scott has seemed to have been lost in the haze of the ongoing Tyson Fury-Deontay Wilder-Anthony Joshua vacuum, and Floyd Mayweather’s upcoming exhibition against social media influencer Logan Paul.

And if Ramirez needed any more incentive, he just became a father for the second time recently, with the birth of his daughter.

“People don’t realize how good I am until they’re in front of me, but that’s been that way my whole career,” Ramirez said. “I have another mouth to feed, and I want them to know that their father was not a bum and that he was a good man who worked very hard at what he did.

“Before you know it, May 22 will be here and I will fight like I never fought before. I’m in good shape and I’m in good spirits. Josh Taylor is going to see a father and a man who is very disciplined and will feel the vibe that I’m here to do my job, and a man who is fearless and willing to work harder than anybody.

“I have nothing negative to say about Josh Taylor. He’s a good fighter and a good man, and I’ll say it again, people don’t realize how good I am until they’re in front of me. They don’t realize how strong and determined I am.”

Ramirez is irked by the current state of boxing. He doesn’t put out videos of his sparring sessions, because he feels no need to embarrass another fighter.

“It’s working with all of these YouTubers doing it, and calling out fighters that there is no way that they’re ever going to fight, and that’s not me,” Ramirez said. “The way some people see boxing today it’s like it’s pro wrestling. I have a good fighter in front of me who does deserve the attention. I like how I’ve been putting my punches together during this training camp.”

Ramirez sparred 147, 154 and 160-pounders. Those inside Ramirez camp say that “he’s punching harder than he ever has.”

Robert Garcia, Ramirez’s trainer, says this is the best his fighter has ever looked. 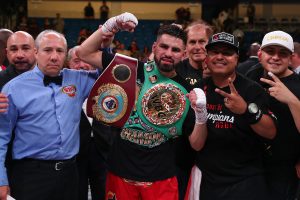 Robert Garcia (right, next to Jose Ramirez) has had tremendous success with the Californian. Photo by Ed Mulholland/Matchroom Boxing USA

“We’ve had a really good training camp and Jose’s mentality has been great,” Garcia said. “One thing about Jose is mentally right now he’s been in the best state ever. He went through a tough time last year with the three cancelled dates with (Viktor) Postol. Jose went through the frustration of three training camps, not seeing his family and not knowing when the Postol fight was going to take place.

“But I say it’s the best thing that happened to Jose, and at the best time. There is a lot of frustration that’s built up. The Postol fight wasn’t Jose’s best performance, because his mentality wasn’t as positive as it should have been. This training camp has been completely the opposite. He started training camp 12 weeks ago, his family has been around on the weekends, and for almost a whole year last year he couldn’t do that because of the pandemic.”

Garcia has noticed an even greater change in Ramirez.

“Joe’s hunger to make history as the first Mexican-American to be the first ever four-belt champion is great motivation,” Garcia said. “Jose is already very strong mentally. Now with his daughter being born and the chance to make history has made him even stronger. I also know it bothers Jose that he is overlooked, and he shouldn’t be.

“Jose and Josh realize that they’re making history, and this should be a huge fight in the boxing world and it is overlooked. It doesn’t bother me. It pushes me and motivates Jose. We see what is going on out there, with the YouTubers and these exhibitions going on, and it only pushes us more.

“This fight will change the life of the winner.”

Ramirez, the Ring’s No. 1 junior welterweight, feels that will be him on Saturday night.

“The waiting part has always been one of the hardest parts for me, because the last nine weeks in training camp went by fast,” Ramirez said. “I can’t wait for the opening bell. Time stops after the fight. No one knows how much I want this, and how much I respect the sport of boxing, other than Robert and my team.

“Every day for me is a goal to give my best. I’m going into this ready, relaxed and calm. I’m going to do well and I’m going to fight with all of my heart and will. My goal is to leave Saturday night with a smile on my face and four belts.”