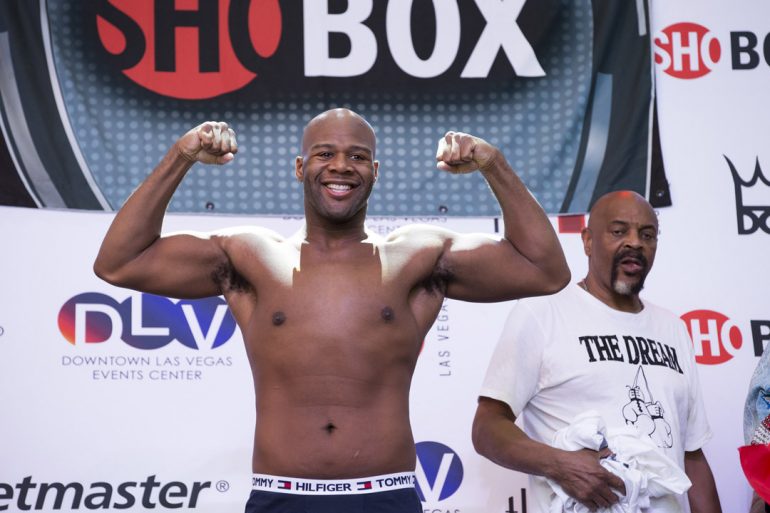 The main event of a $20 pay-per-view on a show titled “Return to Greatness” featured a pair of flabby, inactive heavyweights — one of whom hadn’t defeated anyone of note in recent years, while the other one hadn’t ever done so.

This headline spot not only featured Trevor Bryan taking on Bermane Stiverne, but it also somehow was for the World Boxing Association’s secondary “regular” title belt, far from the most compelling way to spend a Friday night.

But someone had to watch it and report on what happened with Don King’s first event in years — a Don King show in which the famed promoter, who is never camera-shy and never at a loss for words, never actually appeared on-air within the arena.

That title belt now belongs to Bryan, who scored two knockdowns in the 11th round and then landed a few more blows for the technical knockout of a fight that wasn’t as dreary as it could’ve been — I’ve seen far worse heavyweight bouts for actual world titles — but still wasn’t anything that should make you excited to see the winner again.

Bryan entered the fight as the WBA’s “interim” titleholder, not a secondary designation but a tertiary one. He won that “honor” with a fourth-round TKO of BJ Flores in August 2018 and hadn’t had a single fight since.

He was originally supposed to face Manuel Charr, who until earlier in the day was the WBA’s “regular” titleholder, a vacant secondary belt that he attained by outpointing Alexander Ustinov in November 2017. Charr, too, hadn’t fought since.

That was supposed to be remedied on Friday night at the Seminole Hard Rock Hotel and Casino in Hollywood, Florida. Except — for different reasons depending on who you’re hearing from — Charr was unable to get the visa he needed to fly from Europe and be anything other than a tourist. The fighter’s team says that’s because King didn’t provide a signed contract so that Charr could come to America to work. Don King’s folks say that’s not the case.

And so King rearranged the fight card to put Bryan in with Stiverne, the former heavyweight titleholder who was far removed from his better days. (This was after several of the show’s other fights and fighters fell off the card, an ongoing drama that left many wondering whether this broadcast was even going to take place.)

You might remember Stiverne defeating Chris Arreola in May 2014 to win the vacant WBC belt, then getting outboxed by Deontay Wilder eight months later. Stiverne tried to bounce back from being dethroned, only to struggle against Derric Rossy later in 2015. We wouldn’t see Stiverne for another two years, when he faced Wilder in a rematch and was summarily dispatched in a single round in November 2017. Stiverne took another 15 months off and lost by TKO to Joe Joyce in February 2019.

Fast forward nearly two years, and the WBA felt that Stiverne — who hadn’t been ranked in their Top 15 the month before — merited a spot at No. 11 in ratings published, surprise surprise, on the day of this fight.

Bryan was the busier fighter from the outset, working behind his jab, taking a single body shot from Stiverne and responding with several in return. As Round 2 began — and as most of the subsequent rounds would similarly begin — Bryan came out pumping his jab. He dug to the body with a left followed by a right, then a right followed by a left.

With about 35 seconds to go in Round 2, Stiverne had finally taken enough and showed some pride and annoyance, dishing out a hard right hand, throwing a left hook, sending a reminder to Bryan that he wasn’t there just to pick up a paycheck.

But Stiverne is still a 42-year-old who hasn’t fought much, is heavier than he used to be, and who reportedly suffered an arm injury in training camp. There was only so much that Stiverne either could do or was willing to do.

It was Bryan who tended to lead the action. Stiverne still had some spurts, particularly earlier, like the left uppercut, right cross, right-hand counter, and right to the body that he put forth in Round 3. For much of the bout, however, he tended to look for single shots or a one-two, thinking he could land that fight-changing shot.

That fight-changing shot didn’t come. Stiverne landed on occasion but never had Bryan in dire straits. Bryan dodged or blocked other attempts. Stiverne’s left arm began to hang below his waist, further allowing Bryan’s jab to find a home.

There was still a little bit of fire from Stiverne, like the left hook he landed after the bell to end Round 4 and the punches the fighters exchanged as Round 9 came to a close, and a little bit afterward as well. Bryan continued to send out jabs, combine them with right hands and occasionally finish with a third blow, a left hook.

Stiverne came forward for part of Round 10. It didn’t mark a change in the tenor of the fight. He  was doing too little on offense. He didn’t have much left in the tank.

That much became even clearer in Round 11, when Bryan let out whatever little air remained in Stiverne’s balloon. The first knockdown began with Bryan throwing a few jabs, directing Stiverne toward the ropes, throwing a one-two and then following up with four more right hands and a left hook.

Stiverne was up by the count of five. His legs didn’t fully rejoin him. Bryan landed a one-two and Stiverne dropped for the second time. This time, Stiverne was back on his feet as the referee reached seven. Bryan closed in and landed a few more. The ref had seen enough, stepped in and ended the fight, guiding an uneasy Stiverne back to his corner.

Bryan, a 31-year-old who turned pro about nine years ago, is now 21-0 with 15 knockouts. His next fight could be against Charr or, lord help us all, against Fres Oquendo, the nearly 48-year-old former title challenger who hasn’t fought since 2014 but apparently is still owed a title fight thanks to past litigation.

Stiverne is now 25-5-1 with 21 KOs. I’d suggest that he consider hanging up his gloves. It’s a pointless suggestion. Stiverne can just sit on the sideline for another few years and somehow end up in another title fight.

No. Only in boxing.

Nothing says “Return to Greatness” like a hastily thrown together main event involving inactive heavyweights, preceded by two live fights and two old bouts on the undercard, and wrapped up with a feed that cuts off unexpectedly. Here’s what else happened on the show:

– Johnnie Langston won a six-round cruiserweight fight over DeShon Webster, kicking into a higher gear in the second half of the fight en route to a unanimous decision.

The first half of the fight resembled a mediocre sparring session, though there was a decent back-and-forth between Langston and Webster for part of Round 2. Langston began to pull away from Webster in Round 4, landing more often to the head and body. Langston dedicated much of his attack to the body in the sixth round, scoring some of his best shots of the evening, changing position and then going right back to work. The onslaught was clearly bothering Webster, who threw little in the sixth, his mouth wide open as he spent considerable time on the ropes.

Langston is now 9-3 with 3 KOs. He’s gone back and forth between the cruiserweight division and being a smallish heavyweight. In his previous outing, he was stopped in three rounds by heavyweight prospect Jared “Big Baby” Anderson.

– Joahnys Argilagos — a bantamweight prospect who captured bronze for Cuba in the 2016 Olympics in the light flyweight division — won a unanimous decision over the experienced Ernie Marquez.

I’d love to tell you what the scores were, but the ring announcer wrongly said all three judges had it “39 to 40.” It was most likely a shutout, 40-36.

Marquez walked out to Bob Marley’s “Three Little Birds,” whose main lyrics — “Don’t worry about a thing. ‘Cause every little thing gonna be alright.” — is probably what Don King tells all of his fighters who are waiting to get paid.

Argilagos exhibited good hand speed and put together tight combinations befitting his amateur background. However, he never seemed to have his opponent badly hurt, even though Marquez had been stopped in eight of his 15 defeats.

Nevertheless, Argilagos felt comfortable enough to switch to a southpaw stance briefly in Round 4. Marquez’s willingness and surprising sturdiness helped Argilagos shine in that fourth and final round. Argilagos strafed Marquez with combinations and laced in well-timed counters.

Although Marquez was outclassed and outgunned, he never seemed overwhelmed. A look at his record helps explain his comfort level.

Marquez’s 27 previous boxing matches saw him in with a handful of familiar names, including defeats against Chris Avalos, Cesar Seda, Richie Mepranum and Rodel Mayol. He also scored a big upset early in his career — as a 6-4 designated opponent, he narrowly outpointed Yan Barthelemy in 2008. Barthelemy, another product of the vaunted Cuban Olympic Team, was undefeated at the time and had won gold in the 2004 Games.

– Frankie Randall (who sadly passed away just last month) becoming the first person to defeat Julio Cesar Chavez (after Pernell Whitaker was robbed of that distinction), capturing the lineal 140-pound championship by split decision on January 29, 1994, exactly 27 years ago.

– Felix Trinidad winning a close majority decision over Oscar De La Hoya to unify two welterweight world titles on September 18, 1999. De La Hoya, who thought he was comfortably ahead, infamously gave away his victory by spending large chunks of the last rounds moving his feet more than he moved his hands.

– And the show closed up with the opening rounds of Larry Holmes defending his heavyweight championship against Gerry Cooney on June 11, 1982. The pay-per-view never finished the re-airing, ending unexpectedly early.

Follow David Greisman on Twitter @FightingWords2. His book, “Fighting Words: The Heart and Heartbreak of Boxing,” is available on Amazon.