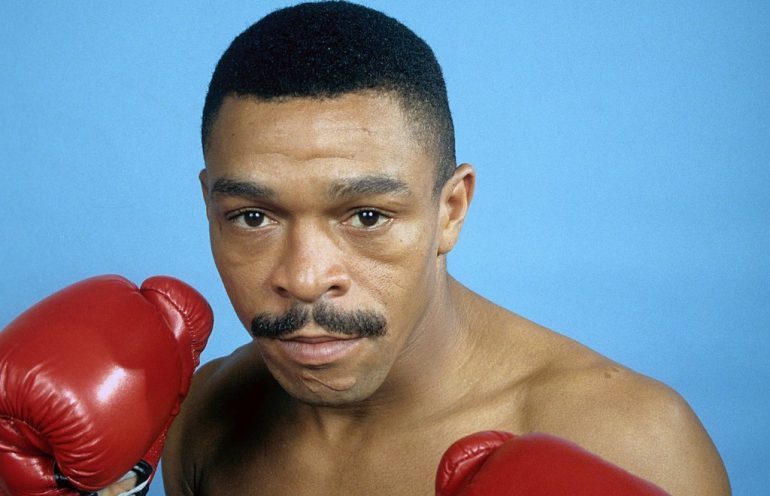 Photo from The Ring archive
23
Dec
by Lee Groves

“It has been hard to watch my father become a shell of what he used to be,” son DeMarcus Randall told RingTV.com this past April. “It almost seems like he is stuck in time. I feel like he will wake up and be his normal self again, but that is not the case — this is a new fight.”

If anyone was equipped to wage such a lengthy battle against such unyielding opponents, it was Randall. That’s because much of Randall’s 22-year career was an uphill fight in which adversity was never too far away. Following a 263-23 amateur career that saw him win five Golden Gloves titles and a silver medal at the 1980 U.S. Olympic trials, Randall’s blend of technique, above-average speed and undeniable power earned him a 23-0 (19 knockouts) record as well as a crossroads fight against former WBC lightweight champion Edwin Rosario June 16, 1985 in London.

For the 23-year-old, the Rosario fight represented a major step up in competition but “The Surgeon” proved he belonged by going punch-for-punch and skill for skill with the Puerto Rican bomber. In the end, referee Harry Gibbs, the fight’s sole scorer, saw Rosario a winner by the narrowest of margins — 98 1/2-98.

Though disappointed, Randall picked himself up and continued his pursuit. That pursuit was largely successful as he won eight of his next nine fights — seven by KO and all inside five rounds. The only blemish was a 12-round draw against previous KO victim Freddie Pendleton for the vacant USBA title in July 1986. Randall’s run of success lifted him to number one in the WBC ratings, and all that stood in the way of a fight against Jose Luis Ramirez was a final tune-up fight with Mexican Primo Ramos, whose 31-5 (21) record included step-up defeats against Robin Blake (majority L 10), Terrence Alli (KO by 2) and Meldrick Taylor (L 10).

Following a relatively even first round, all seemed well for Randall as he used his height and reach to keep Ramos at bay. But moments after trading hooks late in round two, Randall circled toward the ropes and stood still for just a moment. That moment lasted long enough for Ramos to set his feet and crank a crushing hook to the jaw that left Randall flat on his back. The Tennessean tried his best to reassemble his scrambled wires, but referee Davey Pearl completed his 10-count long before that job could be completed.

For the second time, Randall had fallen one step short of a title shot. And once again, Randall was left to pick up the pieces.

Sad to read the news that Frankie Randall, one of my favorite fighters growing up, has died. An extremely talented fighter who was avoided for years, he produced the victory of a lifetime when he finally got his shot against Julio Cesar Chavez
RIP Surgeon pic.twitter.com/L6SkB6teGg

This time, the process took much longer, and, according to an interview in the June 1994 issue of THE RING, Randall struggled to make ends meet because of purses that ranged from $1,500 to $5,000. Over the next six-plus years Randall methodically took apart every opponent, and those names included 1984 Olympian Jerry Page in August 1989 (W 10), former title challenger Rodolfo Aguilar in March 1991 (W 8) and Rosario, the man who derailed his first title run, in January 1993. Before stopping “El Chapo” in round seven, however, Randall had to overcome a second round knockdown two minutes after scoring his own. This time, however, Randall seized the moment, and he did so with a prolonged series of power combinations that prompted referee Jim Kidd to intervene.

Following early KO victories over Sergio Zambrano and Francisco Lopez, Randall, once again the WBC’s top-rated contender, finally earned his first chance at a world title. One factor that greatly helped Randall’s cause was the promotional deal he signed with Don King in 1991 after he defeated Aguilar. Randall fought often and got valuable exposure by appearing on a string of King undercards; for example, his third-round KO over Refugio Guerrero was on the show featuring Julian Jackson-Thomas Tate and Julio Cesar Chavez-Frankie Mitchell while his triumph over Rosario supported Michael Nunn’s second fight with Victor Corboda.

But now Randall would be one-half of a pay-per-view main event at the MGM Grand in Las Vegas on January 29, 1994, and the other half of the equation was none other than Julio Cesar Chavez, who, at age 31, was widely considered the greatest fighter history-rich Mexico had ever produced. Already a champion at 130 and 135, Chavez was making the 13th defense of the WBC belt he won from Roger Mayweather in May 1989 and had been rated THE RING’s number-one pound-for-pound fighter for more than three years before a hotly disputed draw against WBC welterweight king Pernell Whitaker knocked him off his perch.

Although many thought Whitaker deserved the outright win over Chavez, the man known as “El Gran Campeon Mexicano” and “JC Superstar” was still a prohibitive 17-to-1 favorite against Randall, who reportedly was making a career-high purse of between $160,000 and $170,000. Chavez’s dominant fifth-round corner retirement victory against Andy Holligan just 42 days earlier convinced many that the Whitaker fight was an aberration, and given Randall’s past struggles many believed Chavez still had what it took to take what Randall could dish out.

But like Ingemar Johansson in his first fight against Floyd Patterson and James “Buster” Douglas against Mike Tyson three decades later, Randall experienced the night of a lifetime in which all of his talent was fully expressed on the biggest possible stage against his most famous opponent. Chavez unleashed his trademark body attack, but Randall answered with cracking right crosses, well-timed combinations and a rock-solid chin that withstood everything Chavez landed.

Referee Richard Steele issued numerous low blow warnings throughout the match, but it was Chavez who would suffer point penalties in rounds seven and 11. Moments after the second deduction, Randall landed a massive right to the jaw that drove Chavez to the ground — the first knockdown of the Mexican’s nearly 14-year career. This was the signature moment of Randall’s fistic life, and after weathering a desperate Chavez charge in the final round, he and Chavez awaited their fate.

The decision was split, and, to the world’s shock, Randall was declared the victor. Had it not been for the knockdown, Chavez would have preserved his title — and his unbeaten record — with a split draw, and while Chavez spewed venom at Steele, Randall rejoiced in his triumph.

A rematch was staged a little more than three months later, again at the MGM Grand. It was the headline fight for one of the greatest cards in boxing history: “Revenge: The Rematches,” and, for seven rounds, it lived up to the billing as champion and challenger traded blows and rounds. An accidental butt opened an angled gash on Chavez’s forehead severe enough to end the fight, which was sent to the judges’ scorecards. Because of a WBC rule mandating a point be taken away from the uncut fighter, a fight that otherwise was even was turned into a split technical decision that enabled Chavez to regain the championship (77-74, 76-75 Chavez, 76-75 Randall).

With that, another chapter had been added to the star-crossed career of Frankie Randall.

An immediate third fight with Chavez would have been a natural, but that match was fated for the future — the distant future. Instead, Randall was given a title shot against longtime WBA titlist Juan Martin Coggi, a speedy Argentine southpaw with considerable kick in his left cross. Floored in round two, Randall scored three knockdowns of his own and became a two-time titlist thanks to scorecards reading 116-108 (twice) and 115-109. He successfully defended against Rodney Moore (KO 7) and Rafael Barboza (split W 12) before another bizarre twist of fate befell Randall.

On January 13, 1996 at the Jai Alai Fronton in Miami, Randall met Coggi for the second time. A foreshadowing of what was to come occurred in the third round when a Randall slip was called a knockdown but the coup de grace was applied in round five when an accidental butt caused Coggi to suddenly turn away, walk toward the corner pad, melodramatically shake his head and fall to a sitting position on the canvas. To many, it appeared Coggi was attempting to induce a disqualification against Randall, and after remaining on the canvas for more than eight minutes (during which he was administered oxygen), he was stretchered from the ring. The fight went to the scorecards, and, for the second time, Randall lost a world championship on a technical decision (39-38, 38-37 twice).

The outcry over the result spawned a rubber match seven months later, and this time Randall became a three-time titleholder thanks to a relatively routine unanimous decision. But this burst of good fortune wouldn’t last as he lost in his first defense against Frenchman Khalid Rahilou by 11th round TKO. It would be Randall’s last championship match, and, from there, his fortunes inside the ring nosedived as he served as a “name” fighter for the likes of Oba Carr (L 10), Michele Piccirillo (L 12), Antonio Margarito (KO by 4), Jose Antonio Rivera (KO by 10), Peter Manfredo (KO by 7) and Marco Antonio Rubio (KO by 2), among others.

Randall did get that third fight with Chavez, but it happened a full decade after the second. Chavez won a lopsided 10-round decision, and Randall ended his career three fights later after being stopped by Craig Weber on July 15, 2005, the final notch on a 3-13 slide that established his final record at 58-18-1 (42).

Through all the turmoil, Randall was powered by his passion for boxing — he often yelled out “I love my job!” — and while he often approached the ring wearing a surgeon’s scrubs, his nickname of “The Surgeon” had nothing to do with pugilism. According to ESPN’s Don Chevrier during the Ramos-Randall broadcast, the fighter earned the moniker for his hair-cutting skills at the local Boy’s Club.

No matter how he got the name, it proved a perfect fit. Randall identified, then exploited weaknesses with masterful precision, and thanks to YouTube and other platforms his performances will be appreciated for years to come.

Lee Groves is a boxing writer and historian based in Friendly, West Virginia. He is a full member of the BWAA, from which he has won 19 writing awards, including two first-place awards, since 2011. He has been an elector for the International Boxing Hall of Fame since 2001 and is also a writer, researcher and punch-counter for CompuBox, Inc. He is the author of “Tales from the Vault: A Celebration of 100 Boxing Closet Classics” (available on Amazon) and the co-author of  “Muhammad Ali: By the Numbers” (also available on Amazon). To contact Groves about a personalized autographed copy, use the email [email protected] or send him a message via Facebook.