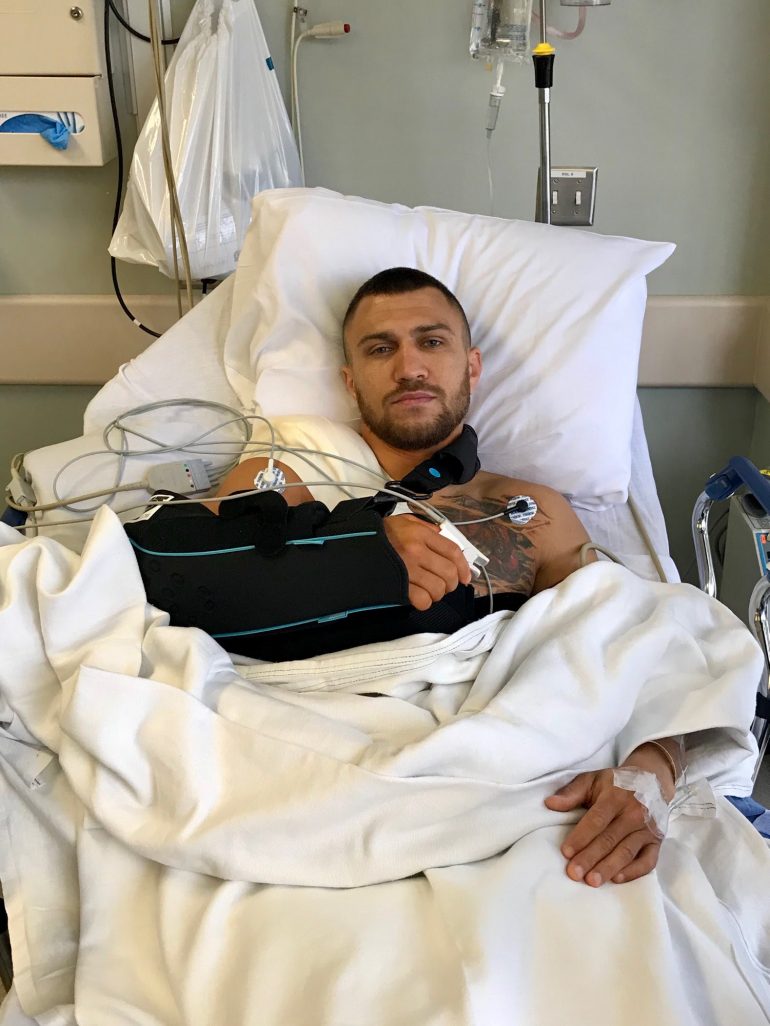 30
May
by Mike Coppinger

Vasiliy Lomachenko is on the mend.

Lomachenko (11-1, 9 KOs) suffered the injury during the second round of his title challenge of Jorge Linares on May 12, but the two-time Olympic gold medalist still managed to score a 10th-round stoppage victory.

The 30-year-old Ukranian was slotted to return on Aug. 25, likely in a unification fight against Ray Beltran at The Forum in Inglewood, California, but those plans are now scrapped. He still plans to return in 2018.

“He had an extensive labral tear, approximately 270 degrees with a small amount of cartilage damage and a bone impaction injury, all resulting in instability of the shoulder,” said ElAttrache, who serves as the team doctor for the Los Angeles Ram and Los Angeles Dodgers. “He underwent an arthroscopic repair of the labrum as anticipated with no complications.

“Based on the result of the surgical repair, we are optimistic for an excellent prognosis and for him to return to competition at his previous level of performance.”

THE RING’s No. 2 pound-for-pound fighter made no mention of the injury immediately following the win over Linares, but he said Tuesday that he “was aware something was not right with my shoulder straight away, but I could not disappoint my fans with excuses.”

One day later, Lomachenko deemed the operation a success in a caption posted on Instagram accompanying a photo of the champion in a wheelchair with his right arm in a sling.

“Every once in a while when he would spar, he’d have pain in the shoulder but then he’d ice it and then there’d be no problem,” Lomachenko’s promoter, Bob Arum, told ESPN. “But this time it was different with the pain he was having in the fight and after the fight.

“If the shoulder doesn’t come around in time we’ll have to postpone it, but we’re looking at him being ready to go Dec. 8. But we know there are no guarantees.”