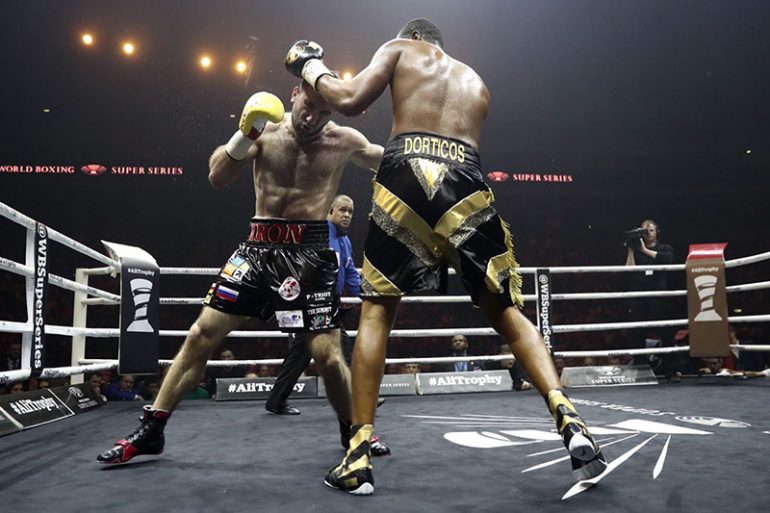 Gassiev and Dorticos go at it! Photo / WBSS
08
Feb
by Doug Fischer

For the second Saturday in a row a cruiserweight title unification bout in a World Boxing Super Series semifinal delivered a stirring 12-round battle and for the second consecutive week THE RING Ratings Panel voted not to drop the loser of the fight in the 200-pound rankings.

Murat Gassiev weathered an early storm from Yunier Dorticos and expertly chopped down the fiercely determined Cuban over the second half of their anticipated all-punchers showdown in Sochi, Russia, last Saturday. Gassiev (26-0, 19 knockouts) dropped Dorticos three times in the final round to earn a dramatic stoppage and unify the IBF and WBA titles.

The fight wasn’t the slugfest many fans expected but the intense clash of styles – Dorticos’ pressure vs. Gassiev’s surgical sharp-shooting – was compelling, and the fight managed outdo Oleksandr Usyk’s hard-fought razor-thin majority decision over Mairis Briedis in another WBSS semifinal the previous Saturday. (Usyk and Gassiev will face each other in the WBSS final on May 11 with the vacant RING cruiserweight title on the line.)

The Panel didn’t drop Briedis from his No. 3 spot due to his fine effort against the tournament’s top seed, and most of them felt that it would be wrong to demote Dorticos (22-1, 21 KOs) from his No. 5 spot following his valiant effort against Gassiev.

The Panel’s leniency toward the losers speaks to the quality of the cruiserweights matchups in the WBSS, but not every member was in favor of keeping Dorticos at No. 5.

“I think Dorticos should drop down a rung,” stated Associate Editor Tom Gray. “He lost, and he lost big. Rewarding fighters for gallant efforts is something that frequently comes back to haunt us. (Krzysztof) Glowacki (No. 6) was pretty much dominated by Usyk, but he’s back with two wins. Swap No. 5 and No. 6.”

Gray, however, was overruled by the other members of the Panel.

“Murat Gassiev-Yunier Dorticos was a sensational fight,” said Anson Wainwright. “Gassiev was able to get the 12th-round stoppage but Dorticos was in this (fight) and showed a terrific chin. He had Gassiev on the backfoot early. He got hit too much and late on that took its toll.

“Gassiev to remain at No. 2. It was a really good effort from Dorticos, who I think deserves to stay at No. 5. He likely beats (Denis) Lebedev but can’t really move up on the basis of the loss.”

Added John Evans, “I think there is a gap in quality between the four (WBSS) semi-finalists and the rest of the cruiserweights, although we can’t swap Lebedev and Dorticos after the Cuban’s loss. I think Dorticos should stay at 5.”

Marty Mulcahey added further support for Dorticos and the World Boxing Super Series, “The WBSS has been fantastic and gone off without a hitch, great for them and fans that have seen the events. We already have Gassiev and Usyk in the top two spots, so are right on and I would not drop Dorticus given his performance. I agree with John and Anson that Dorticos showed he belonged in the top five. If his shots had been more accurate he may have made it a closer affair but let’s give Murat Gassiev credit for defense.”

One of the lower top-10 rated cruiserweights, Maksim Vlasov (42-2, 25), stopped dangerous gatekeeper Olanrewaju Durodola in 10 rounds on the Gasiev-Dorticos undercard. Wainwright suggested moving the Russian veteran from No. 9 to No. 7 in the rankings.

“Vlasov is on a nice run and has done more than (Ilunga) Makabu and (Andrew) Tabiti (both of whom were rated ahead of him),” Wainwright said.

Mulcahey, however, did not agree with advancing Vlasov (though he wasn’t strongly against it).

“I am not that high on Vlasov (a former super middleweight contender) as a cruiserweight,” he said. “I can see Vlasov moving past Makabu but Tabiti did have that very good win over (Steve) Cunningham so I hesitate to do that. So, despite all the good action in the top 10, I am for keeping ratings as they are for now, with no real big argument against Vlasov moving up.”

Rian Scalia voted in favor of moving Vlasov up, swaying the Editorial Board to OK the advancement.

“Vlasov should be slotted up after his win over Durodola, compiled with his overall resume up at cruiser now,” Scalia said. “As Anson said, I think Vlasov should jump to No. 7. Tabiti is very inactive, only two fights last year, one fight in 2016 and Vlasov’s wins vastly outweigh Tabiti’s in my opinion. Makabu’s last good win was (Thabiso) Mchunu almost three years ago.”

Nobody on the Panel was particularly impressed with Gilberto Ramirez’s sixth-round stoppage of unbeaten but unknown and unranked Habib Ahmed, but the WBO super middleweight titleholder held onto the No. 1 spot in the 168-pound rankings. Most of the members agree that the winner of the Feb. 17 WBSS semifinal between No. 2-rated George Groves and No. 4-rated Chris Eubank Jr. will likely supplant the Mexican southpaw.

The Panel also agreed to keep IBF junior bantamweight titleholder Jerwin Ancajas at No. 6 in the 115-pound rankings following the Filipino southpaw’s 10th-round stoppage of tough Israel Gonzalez on the Ramirez-Ahmed undercard.

There was some discussion (prompted by Yours Truly) to consider moving No. 2-rated flyweight Daigo Higa to No. 1 after the WBC titleholder blasted former strawweight beltholder Moises Fuentes in one round on Saturday. Many Panel members believe that Higa (15-0, 15 KOs), a 22-year-old body snatcher, is already the best 112 pounder in the game, but given his lack of experience and No. 1-rated Donnie Nieties’ proven track record over three divisions they didn’t feel right having the Japanese phenom supplant the Filipino veteran.

“On current form I think Daigo Higa beats Nietes, but even with just three fights at the weight Nietes has shown his brilliance,” Mulcahey said. “I believe Nietes has done more quality work than Higa for now and deserves the No. 1 spot. We can revisit after the Nietes-Juan Carlos Reveco bout, but for now think Nietes deserves to maintain top spot.”

Scalia added, “I do think Higa is the best and would beat Nietes or Reveco but his resume isn’t deep yet. Nietes and Reveco have had a lot of longevity and wins in title fights. Whoever wins that fight on Feb. 24 has another good win on their resume, so I don’t think Higa should be No. 1 just because I think he beats both of them.”

Click here to read THE RING Ratings Update from the previous week.