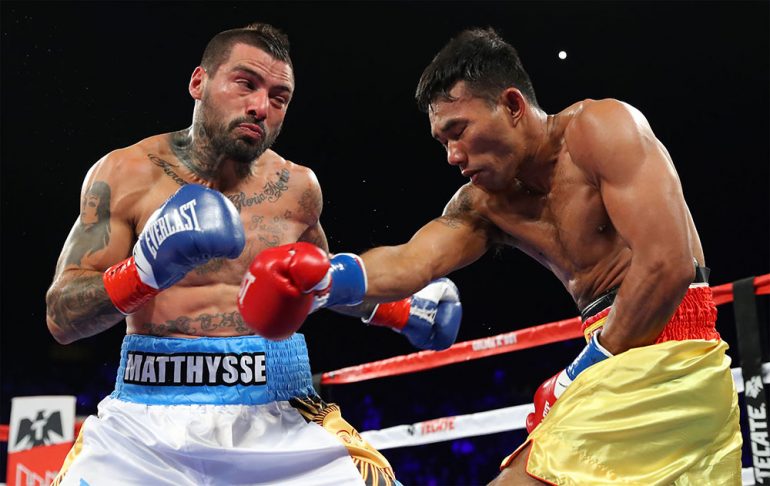 Lucas Matthysse finally got his heavy hands on a major world title, the WBA’s “regular” welterweight strap (which THE RING does not recognize), by scoring an eighth-round KO of Tewa Kiram on Saturday in Inglewood, California, but the 35-year-old veteran looked like a faded fighter before he caught the unheralded and unrated Thailand native. 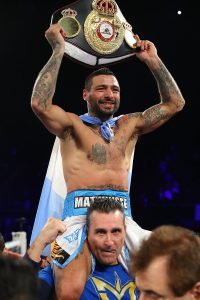 It’s rare for a contender to drop in the rankings after a victory, and THE RING Ratings Panel was split on whether to do so with Matthysse, but a slight majority of the panelists suggested that the former 140-pound standout, who was No. 6 going into the Kiram fight, should not be rated ahead of unbeaten WBO beltholder Jeff Horn, future hall of famer Manny Pacquiao and former titleholder Jessie Vargas.

Brian Harty, the managing editor of THE RING, who was on the fence about dropping Matthysse, put it this way: “If your gut tells you that (Saturday) night showed the fighter he is now, then he should probably drop. He could’ve had a really bad night, but I don’t think so.”

Matthysse dropped from No. 6 to No. 9 in the welterweight rankings.

The only other decision made in the divisional rankings was to keep Mairis Briedis, who lost his WBC cruiserweight title to WBO beltholder Oleksandr Usyk via majority decision on Saturday in his hometown of Riga, Lativa, at No. 3. Briedis gave almost as well as he got in a rousing 12-round battle and his impressive effort did not merit falling below No. 4-rated Denis Lebedev.

It was brought up if Usyk (14-0, 11 knockouts) – who has won two world titles from previously unbeaten beltholders in their home countries – is worthy of THE RING’s Pound-for-Pound rankings. The Panel was split on the Ukrainian southpaw cracking the top 10. Those in favor of him being included, mostly said so because they believe he’s more worthy than Guillermo Rigondeaux, who is currently No. 9. Some were in favor of his inclusion but voted against it because they did not want him to push out No. 10-rated Srisaket Sor Rungvisai. Others, including Harty, want to see more from Usyk before including him among the sport’s elite. 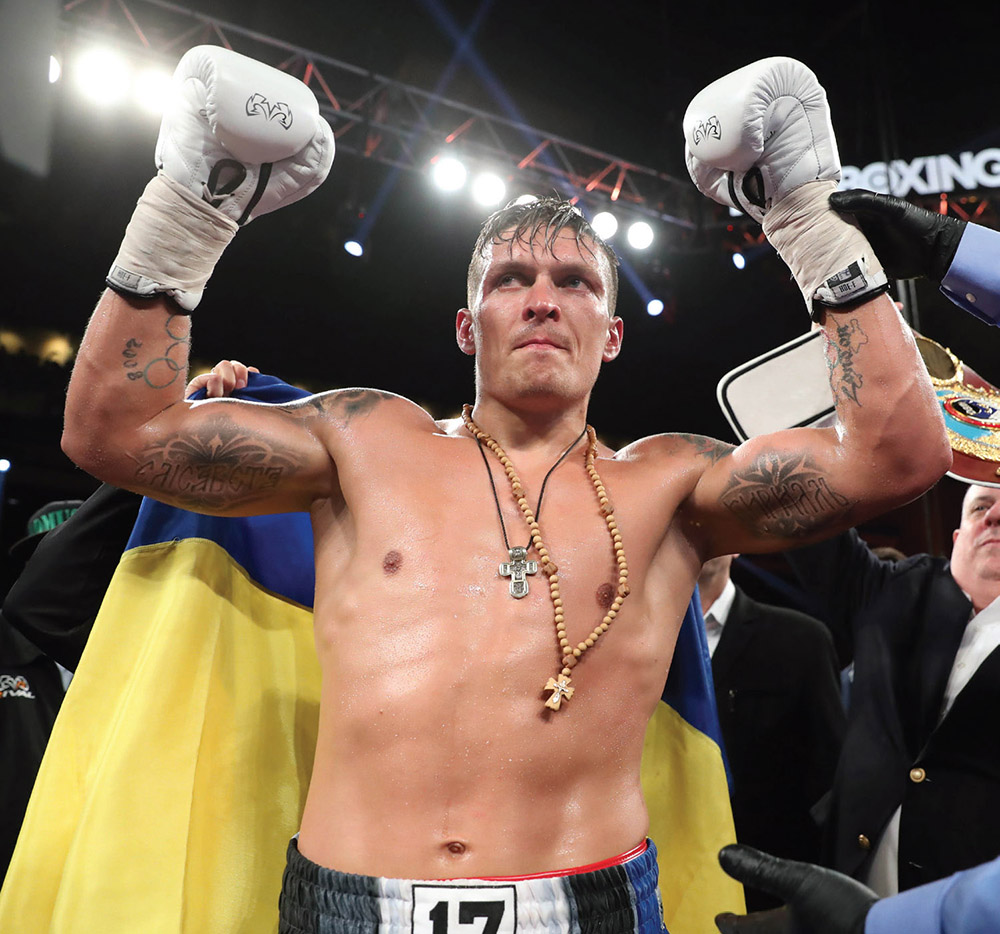 “I’m not sold on Usyk. For me he’s like (Keith) Thurman… I always want to be more impressed than I am (with him). Rigo is a problem, but I’m not bothered by him being where he is because I wasn’t in favor of Sor Rungvisai being there just yet; I think (Juan) Estrada should’ve been there instead. So their fight in my eyes is either proof-of-concept for the Thai fighter or vindication for Estrada — and in either case the winner jumps Rigo.”

It should be noted that the World Boxing Super Series cruiserweight final between Usyk and the winner of this Saturday’s Murat Gassiev-Yunier Dorticos showdown, scheduled for May 11, will be for THE RING’s vacant cruiserweight title.

And speaking of RING titles, the Panel discussed the case of Tyson Fury and a number of scheduled fights that are potentially eligible to be RING championship bouts.

A strong majority of the Panel were in favor of stripping Fury, who has not defended his RING heavyweight title since upsetting Wladimir Klitschko in November 2015, if the lineal champion does not announce a scheduled return bout by the end of today (Wednesday, January 31). More than a few panelists suggested this with some reservation. 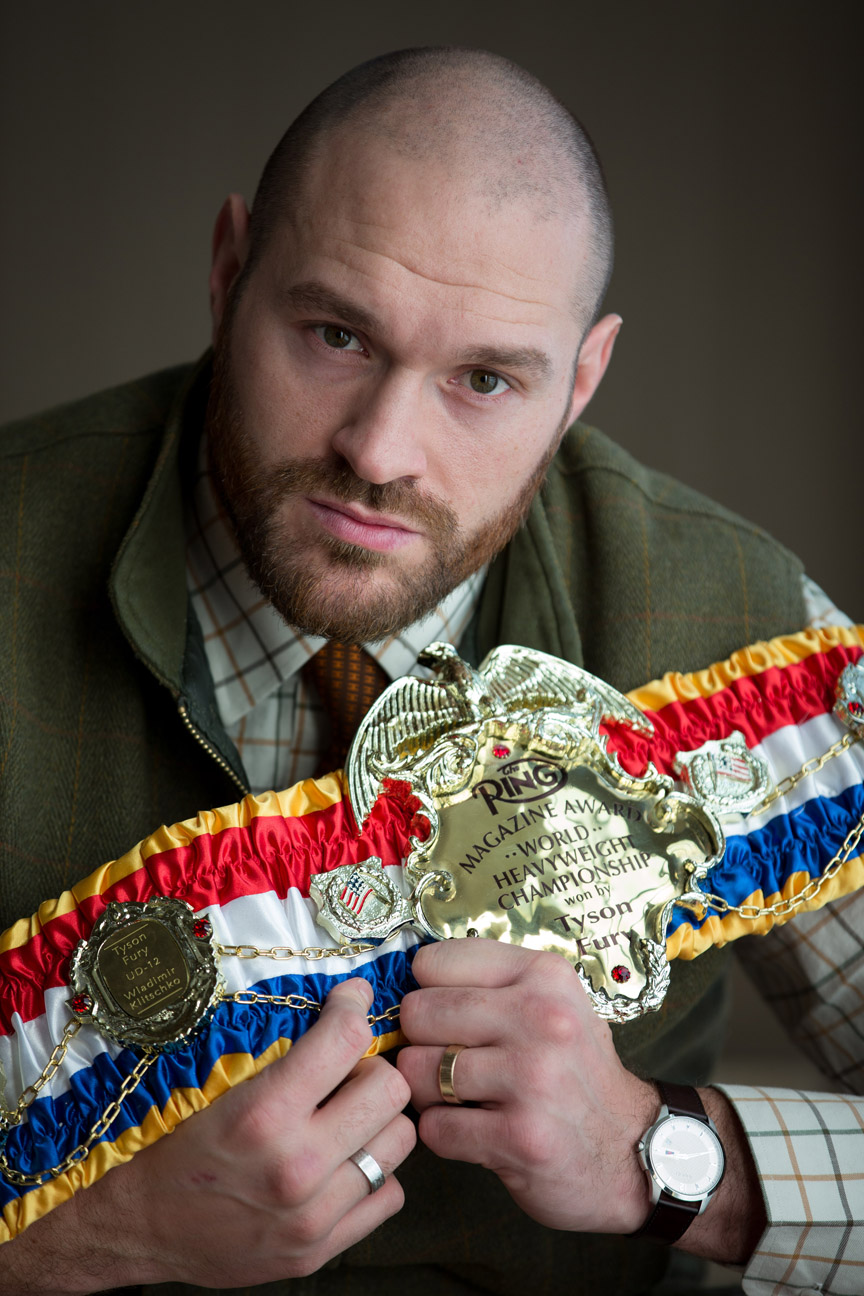 “Fury has to get stripped this week and I have mixed feelings about it,” said RING Associate Editor Tom Gray. “First, I hate that we’re going to separate from the lineal title. And I also admire the way Tyson has pulled himself together, because coming down from 330+ (pounds) must have been torture.

“On the other hand, there’s not enough urgency from his team and the constant narrative is stay-busy fights until he’s match-fit. Sorry, but (Muhammad) Ali fought (No. 1 contender) Jerry Quarry with six weeks notice after 3.5 years. An injury ridden Vitali Klitschko fought Sam Peter for the (WBC) title after four (years). THE RING belt can’t be on the line for 10-rounders and crappy fillers.

“On another note, I’ve had people ask me if (Anthony) Joshua-(Joseph) Parker is going to be a RING title fight. All I can say is there’s more chance of me fighting for the vacant belt at cruiserweight. Even if Luis Ortiz were to upset Deontay Wilder on March 3, he likely goes above Parker, who has nothing on his resume to match such a victory.”

Although Joshua-Parker would be eligible for the vacant RING belt if Fury is stripped (because Joshua is rated No. 1 and Parker is rated No. 3), the Panel was unanimous in voting that it not be on the line for the March 31 IBF/WBA/WBO unification bout due to the strength of the current No. 2 contender (Wilder).

Likewise, the Panel was against the April 7 Erislandy Lara-Jarrett Hurd 154-pound WBA/IBF title unification bout (which matches THE RING’s Nos. 1 and 3-rated junior middleweights) being for the vacant RING title because they believe respected No. 2-rated Jermell Charlo should not be passed over.

The Panel was split on making the Sor Rungvisai-Estrada showdown for the RING junior bantamweight title, but a push from the magazine’s editors will put the vacant 115-pound championship on the line for the February 24 HBO-televised main event. Sor Rungvisai and Estrada are THE RING’s Nos. 2 and 3-rated 115 pounders. No. 1-rated Nayoa Inoue, the WBO titleholder, stated that he intends to move to bantamweight prior to his final bout of 2017 (a third-round stoppage of Yoann Boyeaux on December 30), seemingly clearing the way for the February 24 “SuperFly 2” main event to be eligible for THE RING title. 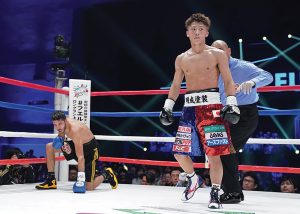 Inoue downed Yoann Boyeaux in his final bout of 2017. Was it his last fight at 115 pounds? Photo / Naoki Fukuda

However, Inoue has yet to vacate the WBO title, and when his promotional company was contacted by THE RING they were non-committal about his move up in weight. THE RING has been told by members of the Japanese boxing press that Inoue’s next fight will definitely be at 118 pounds, but some members of the Panel want the announcement to be official before he’s removed from the 115-pound rankings.

“Rungvisai-Estrada is one of the best fights that can be made in boxing but I think Inoue deserves the opportunity to officially move up to 118 pounds before a RING title fight is sanctioned,” said Panelist John Evans. “The winner of Rungvisai-Estrada vs. Inoue is a fantastic fight and the winner would be fully deserving of a RING title.”

Panelist Rian Scalia also advocated a “wait-and-see” approach. “The situation with Inoue seems to be too up in the air so I think it’s only fair that we wait and see what happens. There’s still about four weeks until the fight to clarify things.”

However Tom Gray wasn’t in a patient mindset regarding Inoue’s situation.

Brian Harty probably stated it best: “I think Sor Rungvisai-Estrada is a worthy championship fight, whether Inoue stays or not. I look forward to whatever he does, but as Tom said: You want the belt, fight the winner.”

The Panel was against the Donnie Nietes-Juan Carlos Reveco fight, which is the on the Sor Rungvisai-Estrada undercard, being for the vacant RING flyweight title. Nietes, the IBF beltholder, is THE RING’s No. 1-rated 112 pounder. Reveco is No. 3. However, No. 2-rated Daigo Higa, who holds the WBC title, is an absolute beast.

“We can’t leave out Daigo Higa (who I think is the best of the bunch),” said Scalia, “and Nietes and Reveco really haven’t stamped their authority on the division, so a ‘no’ from me for the vacant title.”

Scalia’s opinion was echoed by most of the other Panelists.